Caution and Innovation: Do They Go Together?

Are you apprehensive about innovation? You are not alone. A new
study by Accenture based on surveys
of 519 companies across over 12 sectors in the U.S., U.K., and France revealed
that half of executives feel their businesses have become risk averse
when considering new ideas. Instead of inventing brand new products and
services, 64 percent of companies focus more on product-line extensions.
If innovation is the creation and delivery of new value,
they have focused too much on the "new" part and not enough on the
"value" part. While most companies look at innovation as a priority,
managers often dismiss radical new ideas. More involvement in the innovation
process leads to better financial results, as well as helps develop team
commitment.
According to Wouter Koetzier, managing director for
innovation and product development at Accenture, many companies take a low-risk
approach to innovation because they don't have a disciplined approach for risk
management. "It's a situation compounded for many by an inability to
rapidly scale inventions," Koetzier told Business
News Daily. "However, the research suggests that those companies that
have a formal, end-to-end management system to nurture, scale and launch
innovations tend to be more satisfied with their results as they achieve
stronger outcomes." 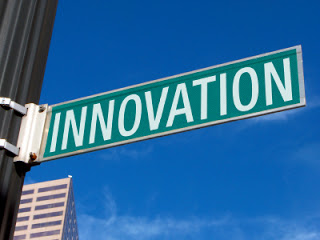 Image via www.andyellwood.com
More than 90 percent of the executives said that the
long-term success of their organization's strategy depends on the ability to
develop new ideas, but there is a decline in the innovation performance
satisfaction over the last three years. The number of executives who were
likely to identify the introduction of a new product category as the main
innovation goal dropped to 27 percent this year - down from 42 percent in 2009.
Not to mention, 33 percent said their main innovation goal was the expansion of
the products that supported basic offerings.
The research shows that companies that have formal innovation-management
systems are twice as likely to say they were very satisfied with their idea-generation abilities.
And, businesses with a system in place are 75 percent more likely to define
their strategy as competitive, twice as likely to introduce a new business
process, and 35 percent more likely to be first to market with new products.
Adi Alon, a managing director in the Accenture Innovation
and Product Development practice, said, "Approached correctly, innovation
can be executed at scale, with speed and balance between renovation and
game-changing initiatives, driving higher strategic and commercial value."