COVID-19 is priming the bankruptcy market - what should you know before joining in? 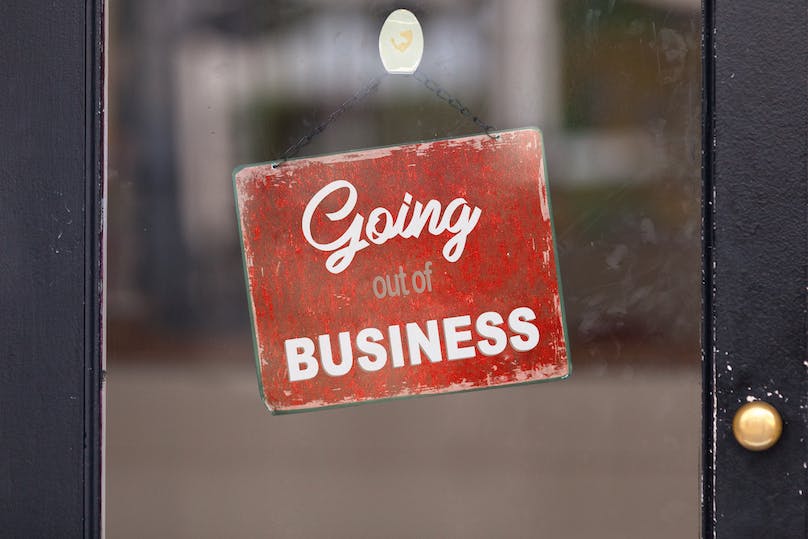 Economic downturns are invariably associated with an increase in bankruptcy filings. The most recent COVID-induced recession is no exception. What should investors keep in mind when considering the bankruptcy market? Legalist's Eva Shang and Robbie Li share their insights.

Even with federal interventions like the Paycheck Protection Program, businesses are still predicted to file for bankruptcy in large numbers. In fact, since the pandemic hit the US in March, the number of monthly bankruptcy filings in 2020 has consistently surpassed that in 2019. Uncertainty has become the dominant market sentiment, leading to a swelling of the distressed market. COVID-19 is priming the bankruptcy market - but what should investors know before joining in? 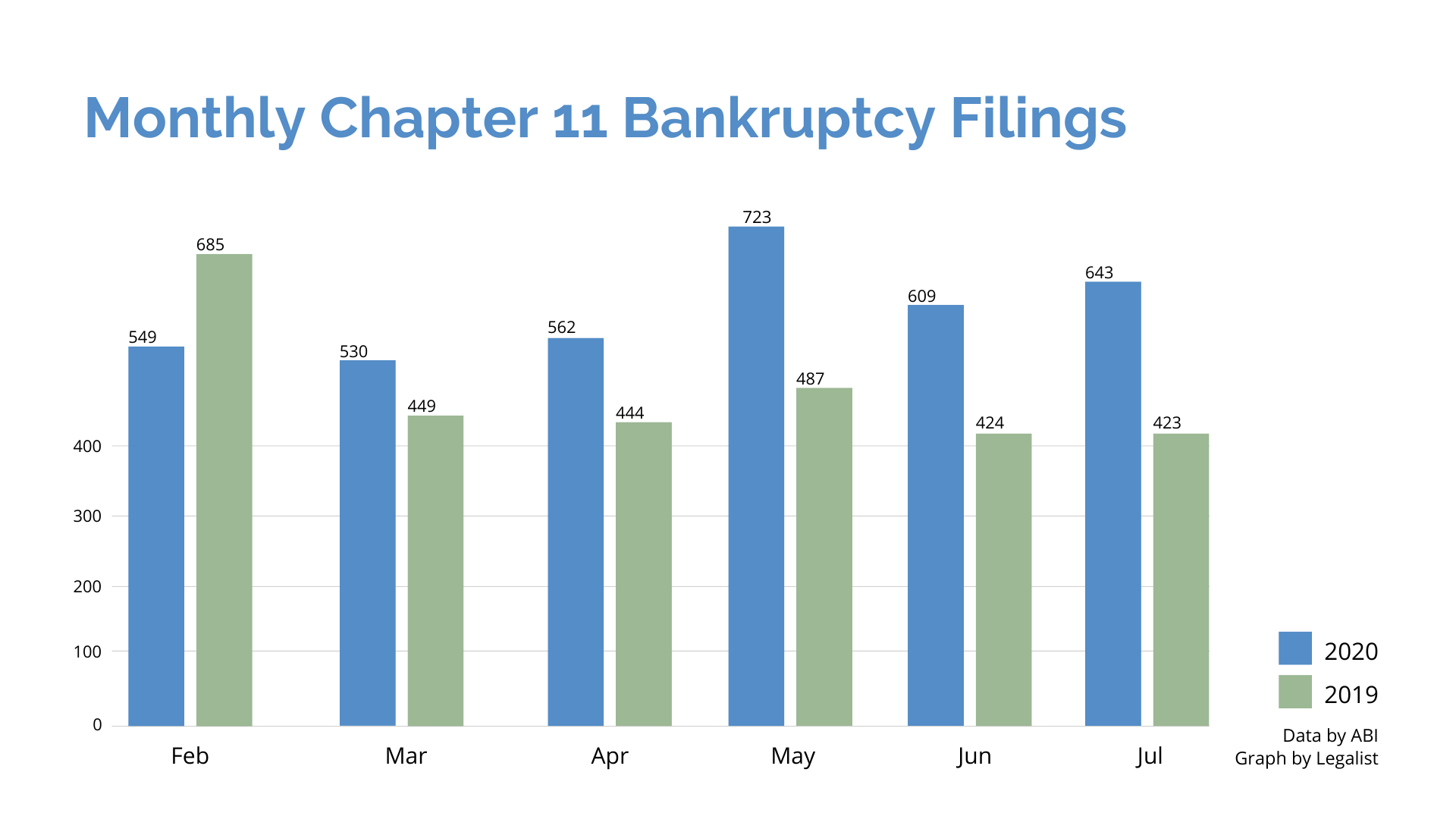 While the distressed market tells a story of increased demand, other markets send more mixed signals. When the pandemic first hit the US in March, equity markets saw an unprecedented level of panic sell-off from investors, triggering the circuit breaker four times. According to the Wall Street Journal, private debt funds have raised $55.5 billion in the first half of 2020, many of that for distressed strategies.[1] Competition in the distressed market for conventional strategies is expected to grow fierce, driving down returns.

In the bankruptcy market, that means that distressed industry giants, including prominent retailers who filed for Chapter 11 bankruptcies in recent months, have plenty of capital to choose from. Generally, countercyclical opportunities like Debtor-in-possession (or “DIP”) financing, a special form of funding for companies that have filed for Chapter 11 bankruptcies, become especially appetizing to investors during recessions. DIP funding has been spotlighted for its high premium in relation to the relative risk that funders take at the top of the capital stack. But with growing competition for large deals, distressed funds may see less attractive rates than they are accustomed to charging. 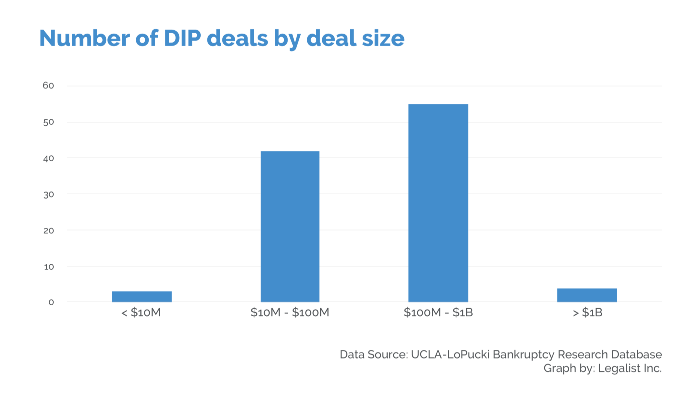 In particular, DIP financing is particularly competitive among deals of a certain profile: amounts greater than $10M and filed in the bankruptcy courts of New Hampshire or the Southern District of New York. In a dataset published by the American Bankruptcy Institute consisted of 112 DIP deals between 2006 and 2012,[2] only 3 involved less than $10M, of which 2 involved less than $5M.[3] Combining various loan facilities, the average DIP deal amounted to $613M.[4] The largest DIP deal was for General Motors during the 2008 recession, with various loans totaling $33B. 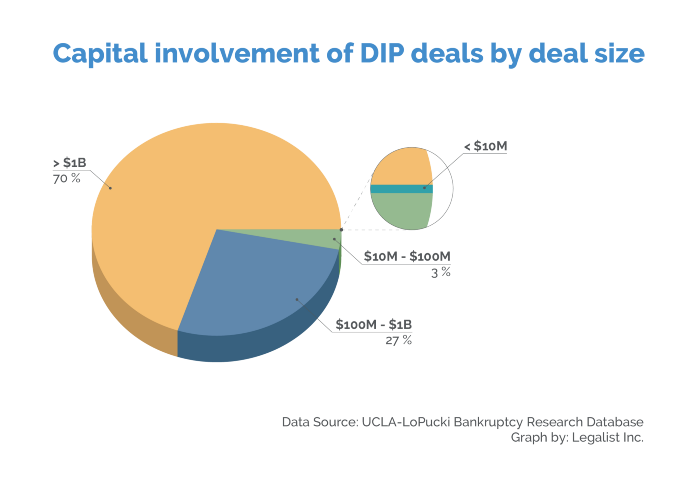 The industry’s proclivity towards mega deals can be seen even more clearly from the perspective of capital involvement. Creditors rarely invest in deals smaller than $10M, and 97% of all capital committed to DIP financing on public companies goes to deals larger than $100M. Private company DIP’s are anecdotally believed to have the same mega skew.

This concentration of DIP deals in size and geography presents a competitive deal-making landscape for DIP funders. While smaller, geographically dispersed companies may be filing for bankruptcy left right and center, distressed funds will be lining up for the same deals while missing out on lucrative opportunities elsewhere.

For investors, as a result of the infusion of capital into the distressed market, traditional bankruptcy financing opportunities are expected to become markedly less attractive. That said, bankruptcy may still be ripe for investment.

COVID’s shadow on the economy has given rise to many smaller DIP financing opportunities outside of popular jurisdictions like Delaware and New York. While small individually, these lower to middle sized opportunities actually constitute the bulk of the market demand. With proper sourcing and underwriting methods, these lower middle market DIP opportunities have the potential to capture the security of the DIP funder’s priority without incurring its competitive landscape and correspondingly lower returns. Our prediction is that funders who are able to source and underwrite lower middle market bankruptcy opportunities will have a real chance to capitalize on the immense value in the upcoming distressed markets to come.

[2] The database tracks bankruptcy filings of public companies with asset size between 500 million and 10 billion. The data was made publicly available by American Bankruptcy Institute, through their Winter Leadership Conference field hearing on November 30, 2012. http://commission.abi.org/field-hearing-wlc-november-30-2012 (last visited Apr 20, 2020).

[4] The average Deal size is calculated by combining loan allowances from different loan facilities upon final approval, which include facilities like term loan, revolving, etc.

SuperReturn International
Nothing else compares
keyboard_arrow_rightView all events