A Sculpture Tells the Story of FUSE 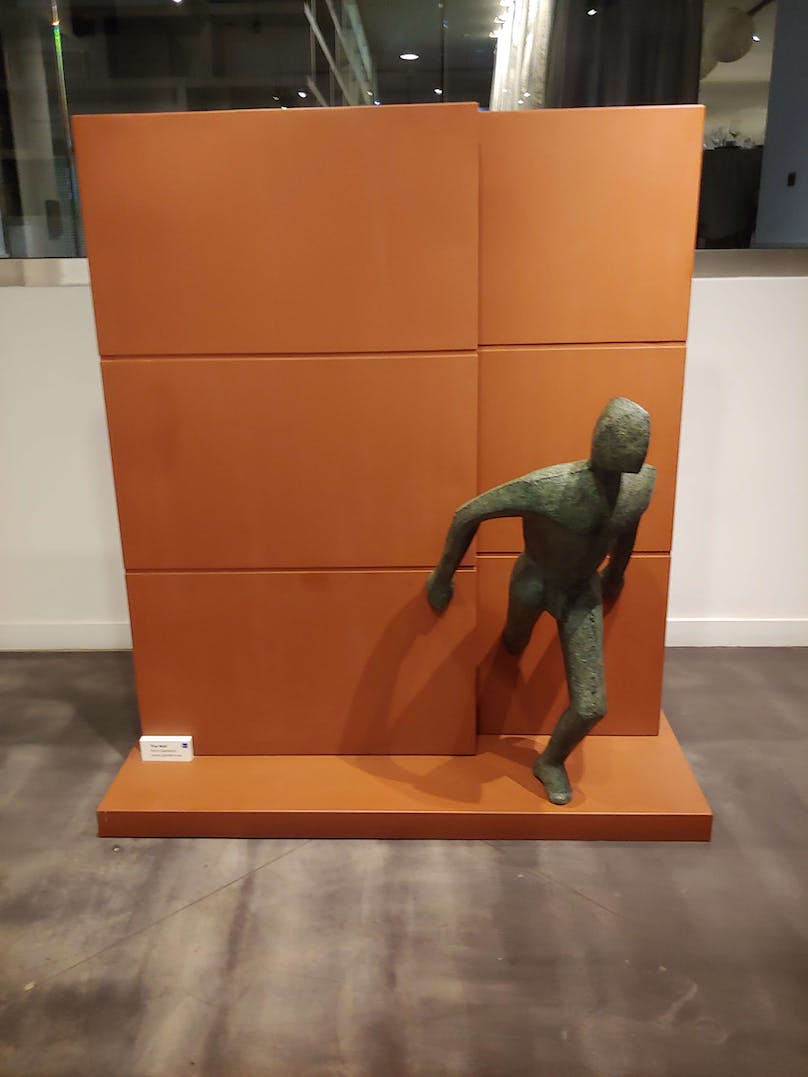 In a hallway leading to the Fuse Conference Halls, a sculpture stands. Depending upon the route FUSE attendees took to the Main Hall, they may not even have seen it.

The sculpture is called "The Wall" from Gardeco.

It depicts two offset orange/brown concrete looking panels and a patina green human figure going through a wall. Like an ethereal phantasm, the human is materialized on both sides of the solid barrier, positioned as if in mid-stride, and seemingly pushing upon the walls. 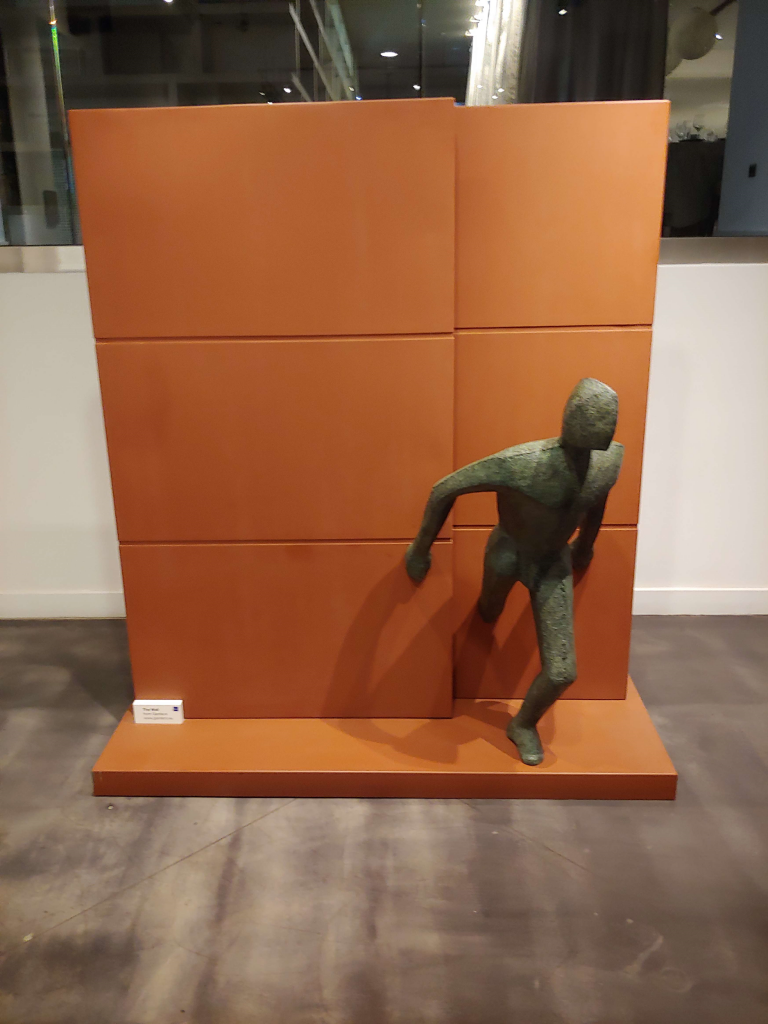 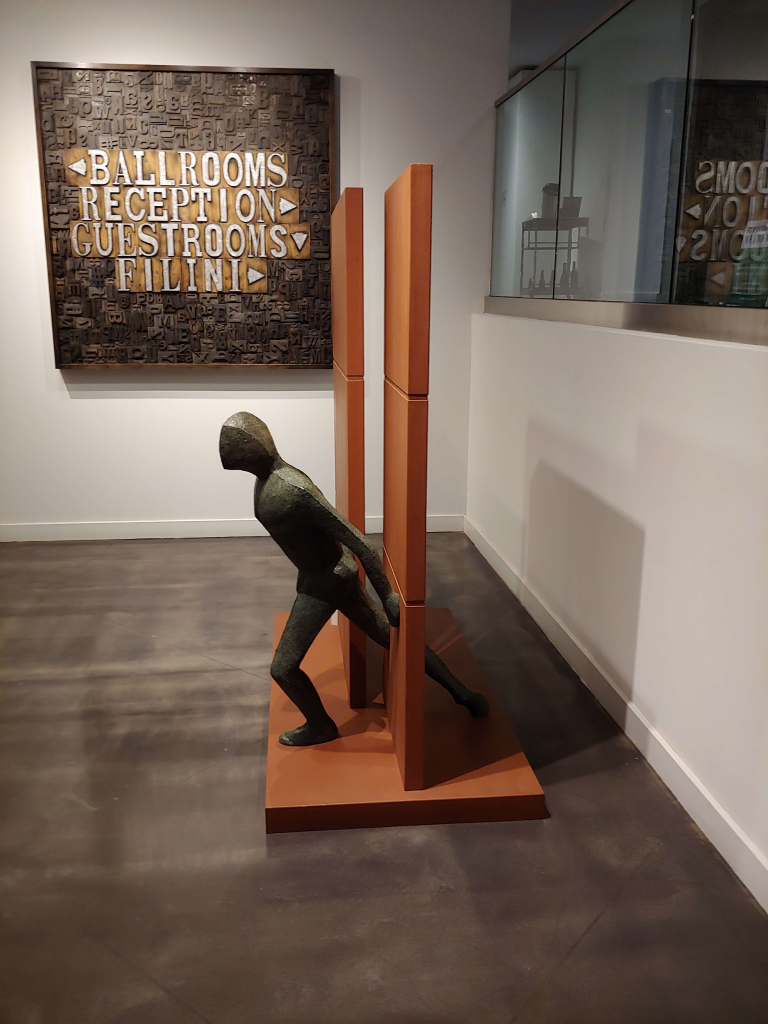 It is a powerful metaphor for the conference.

“Obstacles don't have to stop you. If you run into a wall, don't turn around and give up. Figure out how to climb it, go through it, or work around it.” -Michael Jordan

The world is filled with obstacles. Every day we are confronted with challenges that prevent people from being their best.

Whether like Target we are designing a brand with a soul, or designing products or systems that make the world a better place, we are all running into obstacles, all hitting walls and being confronted with the choices to turn away, go over, around, or...

Most of us think going through a wall requires explosives, but chaotic destruction is not a designer's preferred solution.

Instead, going through a wall requires transformations. Designers understand, immerse and dialogue with “walls”.   Like the figure in the sculpture, designers start "in the dark... " as Cheryl D. Miller pointed out. Designers become light, break through the walls and venture into the light.

Yet, we still retain our material-ness, just as the walls do. Even as the human in the sculpture is moving through the wall, she is also pushing against them, using them to propel herself forward, through the obstacle and into the light.

Such is the transformation of all humans that make their way through obstacles. The obstacles remain as reminders of what humans are capable of overcoming through design. Yet, the barriers have lost their power. Their sting is no longer felt.

Humanity becomes enriched, emboldened and strengthened by the challenge. People become more wise, more compassionate, more filled with love and the capacity to practice the Extreme Humanization that Tom Peters spoke of.

In these victories we all rise from glory to glory, bringing others with us while simultaneously being swept up in the waves of other's successes.

The victories prove to each of us, and to others, that we are all capable of orchestrating, or more properly, designing our ways through walls in our lives.

It's a shame the sculpture wasn't in the Conference Hall, that we couldn’t bring a miniature version of it home.

Because, this sculpture called "The Wall", reminds us of the nature of barriers and our abilities to traverse them.

It also sublimely illustrates a theme that surfaced multiple times during the conference.

...We are all designers.

About the Author: Michael Plishka is the President of ZenStorming™ an innovation and design consultancy. Feel free to drop him a line at michael@zenstorming.com