Why finance should come out of its cave

Andrew Codd CGMA MBA, Founder and Lead Producer of The Strength In The Numbers Show

I had the recent misfortune, as has probably happened with some of you during your finance careers, after having performed a marathon session whilst stuck to my desk, as they say on a mission to respond to the vast array of never-ending emails that were hitting my inbox, to be suddenly struck by the most piercing headache behind my eyes, and it was a bit disorientating to say the least.

On the positive side, I’m lucky this didn’t occur in the ancient times of our cave-dwelling ancestors, where if you had a serious headache or migraine, there was a rather unpleasant solution which involved a technique called Trepanning. This would involve having a fellow prehistoric human using a sharp implement like the edge of a small rock and then proceeding to tap and strike that object around the area of your ache in order to make a small surgical hole or dent in your head to stop the pain.

And by some standards it was deemed a successful approach in stopping headaches although you could probably challenge this, as you could imagine, there were many unintended by-products of such an approach, namely profuse bleeding, dizziness, and maybe even death, but at least no more headache to worry about.

And similarly, there’s a big headache emerging in finance teams today. Look at how hard they are working to remain relevant and at how quickly they’re adopting the latest technologies.

Whilst at the same time, their well-meaning leaders are responding to increasing customer expectations by telling their teams to be more commercial, learn more “softer skills” and embrace these new technologies.

It’s then puzzling to find out that increasing numbers of them are feeling less engaged in their work and that they’re losing influence and becoming irrelevant in their organisations.

And similarly, that’s despite the tremendous opportunities that digital disruption is opening up for the finance function to become more enabling in our organisations with 99 percent of firms are saying they want to become insights-driven, the reality is that only one-third report back that they’re succeeding*.

Why such a headache?

Well, when we’re under all this pressure of whether it's trying to get through emails in our inboxes or even larger pressures like dealing with this digital disruption. Along with threats of automation, meeting the expectations of increasingly demanding customers, managing across cultures, between generations, keeping up to date with the latest technologies, trends, and developing our “soft skill”. These all increase our allostatic loads and triggers a collection of tiny neurons at the top of our spinal cords – commonly referred to as our old or chimp brains.

All bodily functions that take place below the level of consciousness emanate from this part of your brain. Most refer to it as your “fight-or-flight brain” because it’s directly responsible for ensuring your survival. It houses the amygdala—the chemical factory that regulates emotional reactions and your body’s responses.

But, as you might expect, the old chimp brain is very aptly named—this part of our brain goes all the way back to our trepanning ancestors and is concerned solely with our survival. What this means is that if we’re not aware of this, then our survival, chimp brains, dominate our decision-making process because the amygdala exerts a controlling influence on the other parts of the brain.

The impacts of fight & flight mode

Is it any coincidence that the majority of finance professionals are responding by either becoming not engaged (flight), they may be generally satisfied but are not cognitively and emotionally connected to their work and workplace; they will usually show up to work and do the minimum required but will quickly leave their company for a slightly better offer.

Or instead, they are actively disengaged (fight), and be disruptive to fellow employees, customers and even sabotage organisational performance.

"According to a recent Gallup survey on US employee levels of engagement, 53% are in the not engaged category with 13% actively disengaged.**"

And like our prehistoric ancestors, we’re attempting to solve, what is most of the time a straightforward problem by applying our chimp brains which results in the wrong type of thinking. Rather than using our more evolved neo-cortexes, the thinking & logical parts of our brains we’ve gone back to using the chimp parts by applying the latest, sharpest object, or in our case (shiny objects like RPA, Blockchain, etc….), when the solution is already within touching distance and already resides in their organisations.

We need to come out from our caves if we want to move beyond digital disruption.

Coming out of our caves

As part of the build-up to the AICPA & CIMA Finance Transformation London event, I’ll be conducting a webinar to address these current issues and give practical tips about how you can overcome such challenges to make your finance teams more confident about stepping out from their caves.

On the webinar, I'll be sharing a case study and a practical Do-It-Yourself (DIY) approach and toolkit, so that you’re not merely surviving, but instead thriving, and ready to face the task of moving beyond digital disruption by creating and capturing more value for stakeholders!

It’s time to come out from our caves and move beyond the digital disruption! 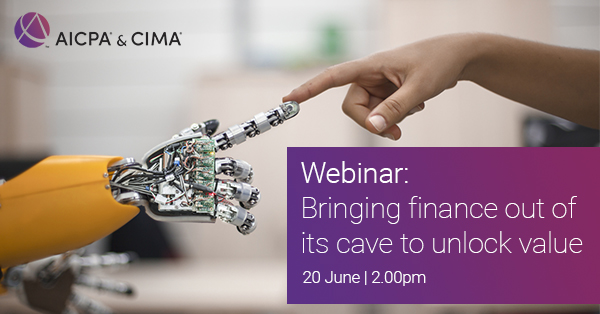 Register for the webinar: Bringing finance out of its cave to unlock value >>

It will be presented by Andrew Codd CGMA MBA. He is the Founder and Lead Producer of The Strength In The Numbers Show, Author and Finance Managed Learning Service Provider.

Andrew is one of the expert speakers at the AICPA & CIMA Finance Transformation London event. He will be speaking on the topic ‘Unlocking Value Creation: what it is, how to do it and how to measure it!’ and will also be hosting one of the Innovation Roundtables.

* According to NewVantagePartners, “Big Data Executive Survey 2018 Executive Summary of Findings”
** Gallup, “Employee Engagement on the Rise in the U.S.” August 2018