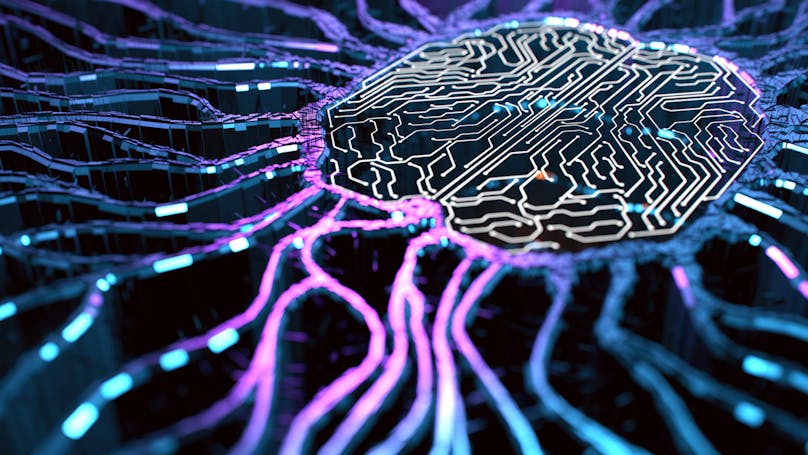 The survey revealed fascinating insights into what opportunities and obstacles organisations currently see in working with AI in clinical trials.

Download the full State of the Industry Report 2019 here.

The use of AI in clinical trials is expected to rise in the industry over the next few years, though the report reveals that this may be at varying rates globally. Respondents were asked how likely their companies would be increasing their use of AI in the next two years. A staggering 68% of Asian respondents said ‘Likely’ or ‘Certain’, a large step ahead of 55% of North American respondents and only 48% of those in Europe. 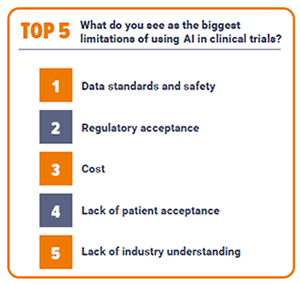 There could be a number of factors to explain these differences, such as regional attitudes towards using AI in clinical processes and budgets. This is indicated later in the survey when we asked respondents to state what they saw as the biggest limitation of using AI in clinical trials. Out of the open responses, the top 3 were data standards and safety, regulatory acceptance and cost. Lack of patient acceptance and industry understanding appeared closely behind; some may argue that these issues are the core determiners of the other three.

The extent organisations are using AI 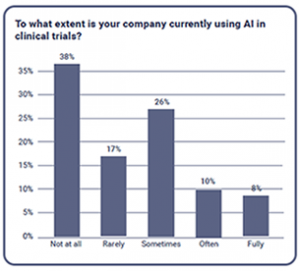 In response to being asked what extent at which their companies were currently using AI in clinical trials, 38% of the participants confidently said ‘Not at all’. This shows that AI still has some way to go for organisations in the industry to realize its potential. Just over a quarter of participants responded with ‘Sometimes’ and 17% said ‘Rarely’. While 10% of respondents said ‘Often’, 8% were brave enough to select ‘Fully’, however the true meaning of this answer could be debatable. 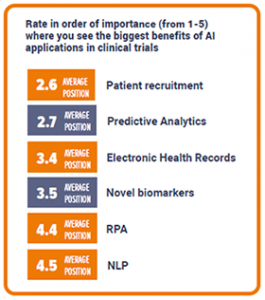 We asked participants to rank the greatest benefits of AI applications in clinical trials from 1-5 in order of importance. Patient recruitment shined as most popular, with an average of 2.6, closely followed by predictive analytics at 2.7. This suggests there may be a common appreciation for AI when applied in the most costly and time-consuming processes. Interestingly, Electronic Health Records and novel biomarkers found much lower scores. And lastly, our respondents regarded robotic process automation (RPA) and neuro-linguistic programming (NLP) to have the least impact in clinical trials, by giving them the lowest ranks.

Download the full State of the Industry Report 2019 here.