Is the emerging-market FX turmoil finally behind us? 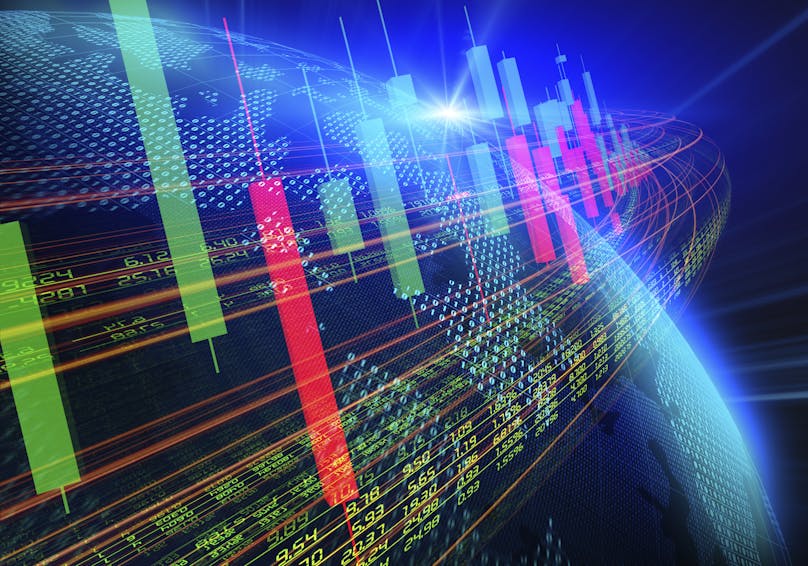 Last year witnessed a great deal of instability in foreign exchange markets, epitomized by sharp depreciation of the Turkish lira and Argentine peso. The instability, driven by the US Federal Reserve’s repeated interest rate hikes, raised concerns about broader risk aversion toward emerging markets. In recent months, a measure of stability has returned to emerging markets, but it remains unclear how long calm will last.

The Turkish lira and Argentine peso have both stabilized since Q4 of 2018. Forceful interest rate hikes by the Central Bank of Turkey seem to have restored investor confidence in that economy. In Argentina, expansion and acceleration of an International Monetary Fund loan package and the government’s commitment to fiscal consolidation arrested the peso’s fall. Despite clear improvement in investor sentiment toward both economies, they still suffer under substantial macroeconomic imbalances and remain vulnerable to shocks. In line with the stabilization of the lira and peso, the currencies of emerging markets as a whole have performed noticeably better since Q4 of 2018 (Figure 1). Broadly speaking, emerging market currencies fell sharply during Q2 of 2018, bottomed out in Q3, and rebounded in Q4. To a large extent, according to the International Institute of Finance, depreciation reflected correction of exchange rate misalignment that prevailed at the beginning of the year. Since misalignment has been largely corrected, emerging market currencies are now showing greater stability.

Notes: MSCI Emerging Market Currency Index measures the total return of 25 emerging market currencies relative to the US dollar where the weight of each currency is equal to its country weight in the MSCI Emerging Markets Index. Data are from 1 January 2018 to 1 March 2019.

So too have emerging Asian currencies

Relatively strong fundamentals are giving a fillip to emerging market currencies. Emerging Asian economies in particular enjoy relatively healthy fundamentals and are thus well positioned to withstand shocks. For example, inflation is below 4% in the two major Asian markets that came under the most pressure during emerging market currency turmoil in 2018: India and Indonesia. The same two economies also suffered the most volatility during the “taper tantrum” of 2013. In line with broader recovery of emerging market currencies, both the Indian rupee and Indonesian rupiah rebounded since Q4 of 2018 (Figure 2). Although India and Indonesia are still burdened with twin deficits in their fiscal and current accounts, the magnitude of these deficits is manageable. In addition to relatively strong fundamentals, the two economies have benefited from decisive policy action to stabilize financial markets. The Reserve Bank of India and Bank Indonesia each aggressively hiked their benchmark interest rates in Q2 and Q3 of 2018  to defend their currencies and stave off inflationary pressures.

Figure 2 Indian rupee and Indonesian rupiah versus the US dollar 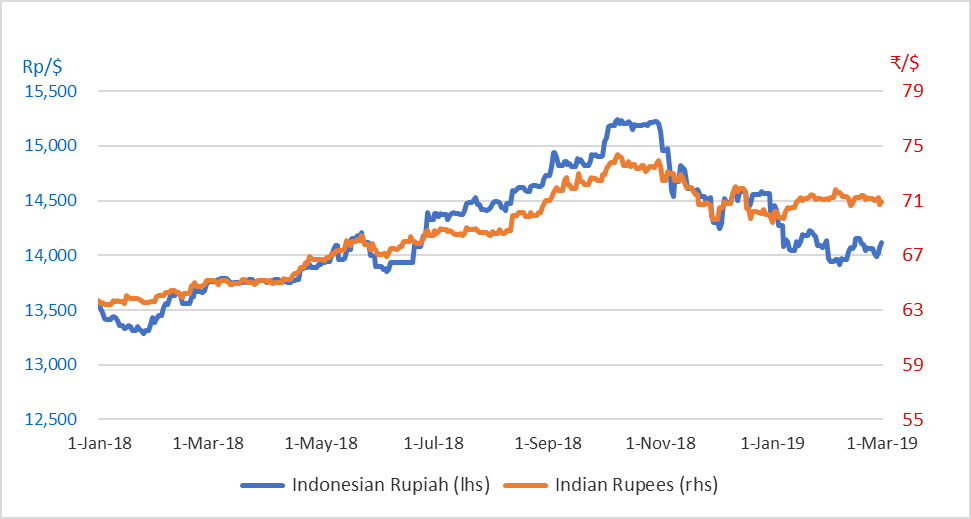 Notwithstanding a notable trend toward more stable emerging market exchange rates since Q4 of 2018, global financial markets remain febrile and vulnerable to shocks. Global trade tensions, especially tensions between the PRC and the US, the world’s two biggest economies, have not yet been resolved, casting a shadow over the global economic outlook and financial stability. Although the effects of trade tensions seem to be limited so far, their persistence creates uncertainty and thus may yet harm economic growth. Uncertainty over trade and more generally global growth prospects contributed to severe volatility in the US stock market in December. Risk aversion toward emerging markets is therefore likely to remain elevated. As noted above, the most vulnerable emerging markets still suffer from imbalances. Lingering vulnerability helps explain why emerging market credit spreads remain elevated even though they are trending down (Figure 3).

Notes: EMBIG is JP Morgan’s index of US dollar-denominated sovereign bonds. It tracks total returns for traded external debt instruments issued by sovereign and quasi-sovereign entities in emerging markets. Widening spreads mean investors are shying away from riskier investments in emerging markets, and narrowing spreads mean investors are warming to them. Data are from 1 January 2018 to 1 March 2019.

Therefore, in light of the heightened uncertainty surrounding global growth prospects partly because of the unsettled status of the PRC–US trade conflict, and considering the unsettling effect this is having on global financial markets, it is premature to say that emerging markets are completely out of the woods. Furthermore, going forward, there is a great deal of uncertainty surrounding the trajectory of US monetary policy, which may destabilize emerging-market exchange rates. [see MPU box] Nevertheless, on balance, the foreign exchange markets of emerging economies, including those in Asia, are unlikely to be as volatile in 2019 as they were in 2018. One reason for confidence is that the most vulnerable economies have implemented various measures to promote financial stability, including fiscal consolidation and monetary tightening. The stabilizing effects of such confidence-building measures will persist into the near future. Perhaps more importantly, there are growing signs that the US Federal Reserve will slow the pace of its normalization of monetary policy. Although the US monetary tightening cycle is probably incomplete, the frequency and total magnitude of interest rate hikes are likely to be less in 2019 than in 2018. To conclude, although emerging-market exchange rates have gained a measure of stability since 4th quarter of 2018, the potential for volatility remains.