Lock-In or Phase Out? An Interview with MEP Bas Eickhout 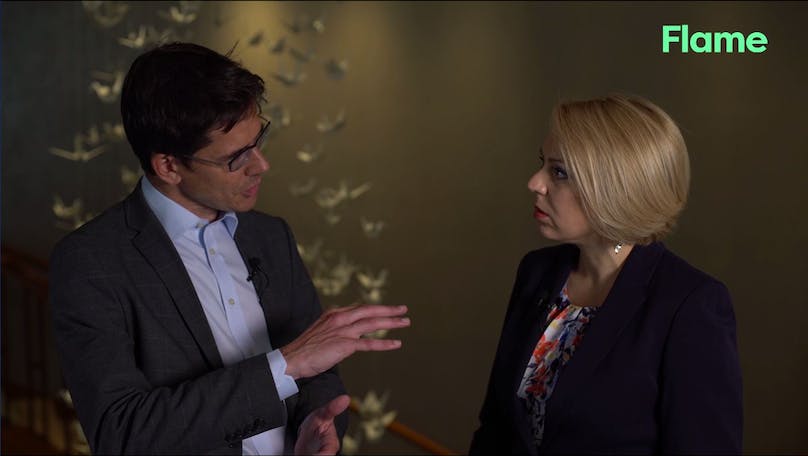 Bas Eickhout is a Member of the European Parliament for the Netherlands, representing GroenLinks (the Dutch Green Party). He is an outspoken advocate for decarbonisation, and is heavily involved in European energy policy in relation to natural gas, biofuels and renewable energy. We caught up with him at Flame to discuss his attitude to the gas industry, the pathway to decarbonisation, and the risk of a fossil fuel “lock-in” due to overinvestment in natural gas infrastructure.

So the question really is, is gas the option we need to balance things out - or do we need to invest in infrastructure around electricity?

Outline the position of the European Green parties on your approach to gas. Is it a friend or foe in the mix to you?

It’s a double answer I fear - it’s almost political isn’t it. I do think that we as Greens acknowledge that in the transition to green energy you need gas, and that gas is a cleaner fossil fuel than for example coal. However if you really look forward one, two or three decades, I do think you need to get rid of fossil fuels entirely, which also means a phase out of at least natural gas – fossil gas. Of course you can think of some of the alternatives – green gas, biogas – but those numbers will be much smaller. So if you look at the infrastructure that we are building for gas as Europe right now, we’re very critical because we fear a fossil lock-in on gas, and I think that’s where we do see a potential. But it is in the medium-term, and we don’t want to be locked in. And somewhere the industry – well they are lobbying for more and more infrastructure, probably hoping for that lock-in. And I think then it becomes a foe.

Can you put a time frame on it?

We’ve done our own analyses and scenarios, and there you see that in a way the gas consumption of Europe, we don’t expect it to increase very much. After 2030, already it will go down substantially, to almost zero in 2050. That’s really talking about 35 years, so building new infrastructure by our assessment is not really needed.

The problem of course is that gas is still a fossil fuel. So if you burn gas you are emitting a lot of CO2, and we know that we need to be CO2 neutral by 2050. So the question really is, is gas the option we need to balance things out - or do we need to invest in infrastructure around electricity? You can also store electricity, you can have good infrastructure which is balancing out all the different forms of renewables. So yes for sure, for now you need gas, but in thirty years much of that balancing can be done in an infrastructure based on renewable electricity.

And what about putting money into infrastructure with Carbon Capture and Storage, and going down those lines instead?

Well I think it is part of the mix, but it will be a small part, because gas will become very expensive as soon as you go to CCS. We see it already – that many of these CCS projects have not been very successful, and quite often it is because economically they don’t make sense. I do know that some of the heavy industry will probably keep on needing gas, and there we have to think of CCS, but that’s for a very specific application. I don’t really see that CCS and gas is an economically viable option for the long-term if you just use it for energy. I think then the alternatives will be cheaper.

Let’s talk about the Groningen field. How much of a challenge is that for the Netherlands, the decrease of gas in the market?

I think it has become a huge debate, and I think we’re a bit late in on the discussion. I think in the Netherlands we have been a bit spoiled by this gas supply in Groningen, and there was hardly any gas or energy discussion. And now suddenly that came up, and politically they were forced to cut production down at a very fast rate. I think that is posing challenges to all of us, and preferably of course you would have seen that much earlier on, that discussion of the alternatives, and also for the entire European supply. But looking at the total consumption of Europe, I don’t think you have to fear much – because if you now look at the current consumption infrastructure for imports they are already over-achieving that. So in that sense for the time being we are safe on gas. But of course we will have to think about what kind of efficiency policies need to be in place in order to waste less gas.

Do you think those policies need to be driven by individual governments, or do you think it’s driven more by public opinion? Or do you think that given the flexibility of the pricing the market will decide?

I don’t think the market will decide. I think at the political level you have to push it in a certain direction. If you leave it to the market, the market will sit on where it’s convenient, and that of course is business as usual, and just doing what you’re doing now. So I think with policies, you can put in standards, you can put in efficiency policies, which are pushing our energy use and consumption in a certain direction. I think that should be a European effort; we’re talking about one European energy market. You are already seeing too many national decisions about creating infrastructure which is in the end economically not viable. So I think European policies need to be in place, and of course then the market will deliver, but it needs to be pushed in a certain direction. And therefore we need politicians, I’m sorry.

What I would like to see is an honest discussion from the gas sector about how they see the volumes that are needed for European consumption in the longer term – and I’m talking about the next decades – being phased out, and in what timeframe we can phase out, and how then the remaining fossil fuel can be replaced by biogas, or how CCS will be put in that picture. I hear too often more general statements from the industry, which are more or less putting gas’s interests in front – I want to see the numbers.

Well this is a gas conference.

Yeah sure. But I think in the end, if everyone is talking about “oh gas is a great ally for renewables in our low carbon future” – well the low carbon future needs to be zero by 2050. So how do the numbers add up? I want to have an honest discussion there, and so I’m challenging the industry to come up with an honest discussion with the right numbers. And also a fair question - how much infrastructure additionally do you really need? And my answer would be hardly any. I think that that is still a statement that I haven’t heard from the gas industry.

Do you have meetings set up with people at Flame, or are you just hear to listen?

Usually how it goes is that when you are on such a panel, and you are challenging the different panellists, then the meetings fill in afterwards automatically [laughs].