Looking over the horizon – with the help of bubble models Historically, it has been quite impossible to predict the future, and in an exponentially evolving world and changeable market, the ability to know what is likely to happen before it happens has never been so valuable. Although financial bubbles have a bad name for being inefficient, Prof Dr Jerome L Kreuser, Senior Researcher, Department of Management, Technology and Economics, Zürich Switzerland and CEO and Founder of RisKontroller Global LLC, proposes that it can indeed produce meaningful information. So let’s see how Kreuser was able to predict the Bitcoin crash back in Dec 2017.

Can we do better before we have another major accident?

But is it possible to see over the horizon in financial markets and what does it mean?

Seemingly we couldn’t extract additional price information beyond the date of observation if markets are efficient. In addition, extracting reliable information from noisy markets (Black, 1986) characterised by a high noise-to-signal ratio are bound to fail. We look for those places where there can be market inefficiencies. One of those places with considerable prospects is bubbles, positive (resulting in crashes) or negative (resulting in rallies). There are several groups working on this thread including Kreuser and Sornette, 2018, Sornette and the Financial Crisis Observatory (2015 and many other references in Kreuser and Sornette, 2018), Davis and Lleo[1], 2015, Ziemba, Lleo, and Zhitlukhin, 2018, plus others.

There are several explanations for inefficiencies in financial bubbles. For example, Weinberger, 2014, suggests in an extension to Shannon’s Noisy Coding Theorem that a cause of market inefficiency in bubbles is that the underlying fundamentals are changing so fast that the price discovery mechanism simply cannot keep up. In the run-up to financial bubbles willful ignorance degrades the information processing capabilities of the market.

We suggest that in fact this process produces an increase in the amount of “pragmatic information” (meaningful information) in the market. The reason is that the noise-to-signal ratio is reduced in positive and negative bubbles because, assuming volatility is bounded, the expected return increases (sometimes exponentially). We know from Merton, 1980, and Ambarish and Seigel, 1996, that the time to estimate expected returns is a function of the ratio of volatility to expected return. We seek to exploit this in our bubble model and its applications in the following.

We have three main questions to answer.

We introduce the simple stochastic price process with a discrete Poisson process.

The crash factors, κ i , are assumed independent and constant over time and distributed according to the probability distribution Π≡{ηi = Pr[crash amplitude = κi]| i = 1, 2, ..., n}. Thus, conditional on no crash happening, which holds at each time step with probability 1-ρt, the price pt follows a geometric random walk with mean return

on Δt and volatility σ. We assume that σ is constant, although it is not a necessary condition. At each time step, there is a probability pt for a crash/rally to happen with an amplitude that is proportional to the bubble size, or amplitude defined as

where Nt  = p0exp(rNt) and rN is defined as the long-term average return[2].

We avoid trying to define what a bubble is.  Rather we are concerned with jumps of any size.  You may decide that a “bubble” is a “jump” of sufficient magnitude.

We assume now that the expected return

is determined in accordance with the Rational Expectation condition

is the expected crash factor. With the RE equation, the value

of the expected return of the risk asset is:

We form a Kelly (expected log of wealth) problem.  Let λt be the fraction of wealth Wt allocated to the risky asset in time t and 1-λt the allocation to the risk-free asset with return rf. Then

has been defined in (1).  We wish to determine

where Et is the expectation conditional on the information up to time t.

, pt by separating the geometric random walk from jumps in the historical data. We do that using an extension of the method of Audrino and Hu (2016) on realised variation and bi-power variation. When we do that, we will separate out σ, meaning that a correct estimation of the model makes the “true” σ associated with the underlying geometric random walk component smaller than the apparent σ computed directly from the historical data without awareness that jumps are present.

This method produces an average probability for a crash/rally. After examining the following graph, we will discuss how we estimate a dynamic probability that is the crux of mitigating large bubbles and advantaging rallies.

We have the problem of estimating the parameters rD, rN, and the size of the time step [t, t+1]. This would seem problematic especially for rD, which can be very variable.

We apply this method in Figure 2 where we include graphs for:

We see in Fig. 2 that the Optimal Efficient Portfolio significantly outperforms the asset and most importantly it mitigates the DJ 1929 crash.

Xiong and Ibbotson (2015) study accelerated stock price increases and note that they are strong contributors of a higher probability of reversal reconciling the 2–12 months momentum phenomenon and one-month reversal. This is further elaborated by Ardila-Alvarez, Forro, and Sornette (2016) who introduced the “acceleration” factor.

We introduce this factor by assuming a parametric form for the probability as a function of the mispricing for a positive bubble (q<1) and for a negative bubble (q>1) of the form:

For a positive or negative bubble, we have 0<qa≤1 and aln(q)≤0 ∀a as given above.

If we could measure

, we could compute pt directly from equation (3). Along with the observable prices, we assume that the parameters rD, rN,

We propose to calibrate the parameters a and b of the probability function using weighted least squares:

We define t1 as the beginning of a bubble when ln(qt) is close to zero and t2 the time when the probability is being estimated (i.e. “present” time).  In practice, Ω consists of those time periods in a bubble where |ln(qt)| is sufficiently large as defined by the parameter β. The reason for β and the weights Wi is that the fit improves as |ln(qt)| gets large, i.e. when a bubble is well underway.

through the RE equation. The reason this can work is that we have assumed that σ is constant (or at least bounded) whereas

is accelerating.  This also gives us the rational for weighting the observations by |ln(qt)| as, the larger it gets, the larger is

Fig. 3 shows the values of the dynamic probabilities for the problem DJ 1929.  Note that the crash probabilities keep jumping up throughout the runup to 1929 yet the Optimal Efficient Portfolio performs well with respect to the asset.  In 1929 it mitigates the crash.  The rally probabilities even predict the continued short-term rebound subsequently moving to zero as the price continues in downward run.

Warren Buffet says he can’t beat the S&P 500 market (CNN Business: Markets Now: 25 February 2019 2:07 PM ET).  So, should we try?  We tried.  We tested our bubble model over a 20-year period in Fig. 4 and ended up 2.7 times higher in total valuation or about an annualized improvement of about 5% additional return each year.

The corresponding probabilities pt are given in the following Fig. 5.

There has been a lot of talk in January about the possibility of an S&P crash. So, we ran our model and made a prognostication on 18 January 2019 (Details here). We detected no signal for a sustained crash. Rather we anticipated a slow movement toward the normal price while detecting probabilities for a rally (See Fig.6 & 7), which has occurred.

We give one last example. Using our bubble model on Bitcoin on 19-Dec-2017 we detected a sizeable bubble in Bitcoin and predicted it would crash and I recorded that possibility on LinkedIn on 21-Dec-2017. But there is much more. We predicted that the Bitcoin price would drop from 18,940 to 6,554 with a .78 probability. Our bubble model is based in part on the method of Kelly. So, it produces a portfolio composed of the asset and the “risk-free” asset. It showed in Table 1 that since August 2017 the model slowly divested itself of Bitcoin (See the parameter ) until by December 2017 it was almost fully divested of Bitcoin. The model yet showed an outperformance over Bitcoin of 265% over the period run. Details are in Kreuser and Sornette, 2018b. On 22 December 2018, I had sent two emails to the FT outlining these prognostications, which can be verified. 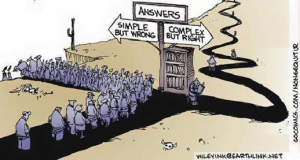 The model is complex enough to capture what needs to be captured. “Everything should be made as simple as possible, but not simpler.” Albert Einstein. An idea elegantly captured in the cartoon at the right.

Much yet needs to be done, verified, and improved. We are continuously working on it vigorously.

Can we see over the horizon? The view may be a bit fuzzy, but it seems we can see enough to make it profitable to look.

process whereas their jumps are independent of a bubble model and their model is in continuous time.

[2] We call it the “normal price return”.  Some may interpret this as a fundamental price return but that is not the specific intention here.