Investment strategies based on news and social media sentiment can add significant value to investors. We can track sentiment about a specific sector, country or a stock index, and use it as a market entry or exit signal. The resulting portfolios often outperform a benchmark, especially if used in combination with other signals (and common sense). However, in the era of fake news, biased news outlets and negative media frenzy beyond what is justified by fundamentals, sentiment-based strategies can lose their shine, as Dr. Svetlana Borovkova explains.

Investment and trading based on news and social media sentiment have been gaining popularity in the past 10 years. Companies such as Thomson Reuters, Bloomberg and Ravenpack offer sentiment tracking AI tools, which “read” and interpret news stories and social media feeds. Increasingly, trading and quant investment firms make use of sentiment signals in their strategies. Media-based information, usually available in real time, precedes “hard” information about fundamentals, which are available typically on a quarterly basis and hence, are lagging. Sometimes media does not only reflect the state of a company or an industry but is a direct cause of it: a famous example of such a media-driven distress is a bank run.

In 2016, we demonstrated the power of media sentiment in monitoring the health of the global financial system, by introducing the so-called SenSR: Sentiment-based Systemic Risk indicator. This indicator measures the media perception about the financial system by monitoring the news sentiment about the so-called Systemically Important Financial Institutions: large, highly connected banks that have a potential to drag down the entire financial system. Such a sentiment-based indicator precedes other risk indicators (such as VIX or SRISK of Robert Engle) by as much as 12 weeks and signals the deterioration of confidence in the financial system way before other, more fundamentals-based indicators do.

Aside from risk monitoring, SenSR can be used to give a signal to get out of financial stocks just in time, before they go “south”. Similar indicators for sectors other than financials (e.g. tech or energy) can help decide, at each point in time, which sector stocks to hold in our portfolio and which to avoid. Sector rotation strategies based on such sector sentiment indicators are typically superior to those strategies that rely only on past price momentum or on “hard” information such as fundamentals or analysts’ forecasts.

Behavioral finance research consistently shows that investors give more credence to negative than to positive news. Hence, sentiment-based indicators can be particularly powerful when used to monitor market downturns, i.e., as sell signals. In my study with Philipp Lammers, we have shown that in the past 10 years, sector rotation strategies which use sector sentiment indicators as exit signals had nearly three times lower volatility than a static sector-diversified portfolio of ETFs, and comparable return (see table below, where “Price only” is the sector rotation strategy based on the past price momentum). This risk reduction occurs because sentiment-based strategies generate timely sell signals when sentiment about a sector declines, which usually precedes the actual price decline.

What if we use the same idea for monitoring regional stock markets as a whole? Just as for sectors, we construct sentiment indicators that monitor all stocks in S&P500, FTSE100 and other major stock indices. Recently, we tested such country-wide sentiment indicators, for US, UK, EU and Japan stock markets. We call these indices CNSI (Country News Sentiment Index).

It turns out that if a CNSI is used for determining when to get in and out of the corresponding stock index, a significant outperformance is achieved when compared to just buying and holding a benchmark index, as the figure below shows. The sentiment signals tell us to get out of a stock market just in time to avoid the worst market downturns. As the result, the Sharpe ratio of the dynamic sentiment-based strategy is 0.79, compared to 0.29 of the index.

So, this works well. Or does it?

If we look at the performance of sentiment-based strategies per year in the figure below, we see that it was not as good in 2018 as in other years, for most stock markets. 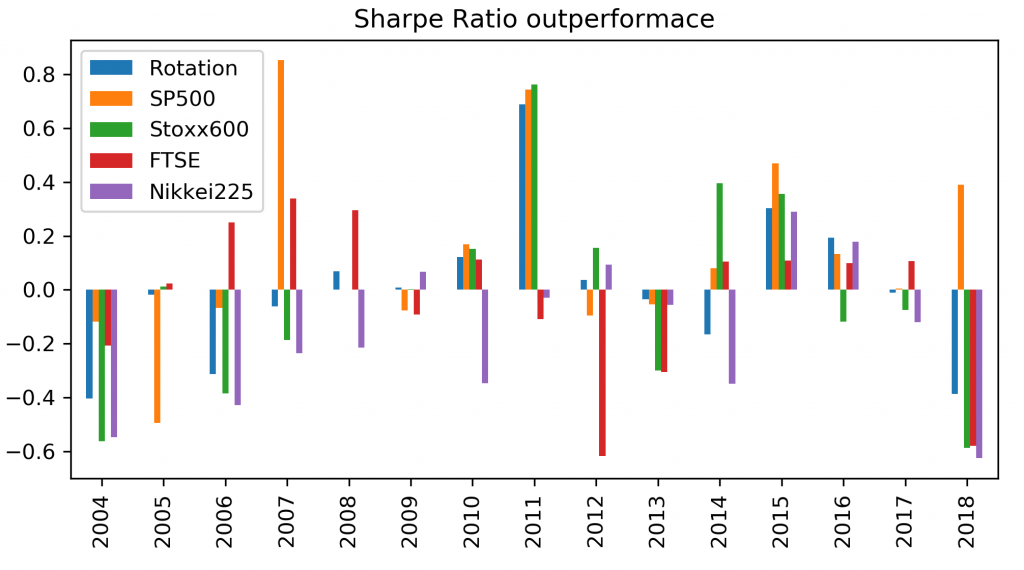 But, of course, the year 2018 was quite different from the previous years in many aspects. Fears about Brexit and US trade wars have dominated the media, driving down the sentiment about stock markets. Negativity and general media frenzy was completely disconnected from what is justified by economic fundamentals. In addition to that, the omnipresence of fake news, abundance of tweets by the US president and inability of any coherent decision making by UK regarding Brexit leads to a very uncertain and volatile investment environment. Not only returns have suffered: the volatility of returns shoot up as well, as the figure below clearly shows. 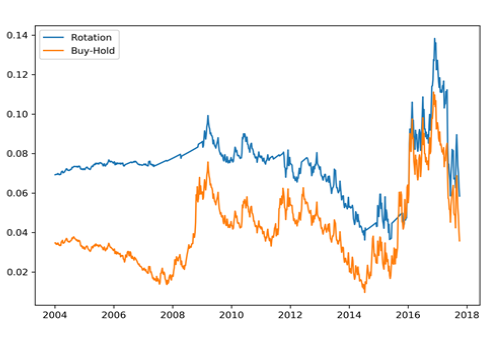 Most systematic investment strategies (such as momentum) performed badly in 2018, and sentiment-based strategies are no exception. It seems that sentiment signals, which usually help investors make right decisions, understandably got confused. So let us hope that fears about things like Brexit or Trump administration subside soon, and not just for the sake of investment returns.