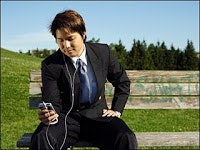 In any aspect of life, if you are confronted with the question
have you worked as either 'an organic pickle maker, or a fluffer in a strip
club,' you know you are in for an interesting talk. World renowned window
dresser Simon Doonan
who is the Creative Ambassador for Barney's started his presentation at FUSE
2014 in just that fashion.
Simon Doonan's presentation at last year's FUSE event gave
the audience insights on finding unique niche roles, Doonan's examples being 'a
transgender ventriloquest' or 'a sustainable goat herder', and re-inventing and
changing the rules in such professions. There are fundamental elements that
came from the presentation that can be utilized across many if not all
professions. Strategies such as taking an industry norm and flipping it on its
head or simply injecting humor into an advertising strategy can grab the
attention of consumers and really engage with them, which at the end of the day
is vital for sales.
The window dresser from England, who also has penned a
number of books and writes a column on style for Slate, often uses taboos or up
to date talking points and made them into public displays. He stressed the idea
of when starting out in a new job that may have certain norms surrounding it,
to do the exact opposite of what everyone else is doing. For example certain
displays of his that went completely against the rules of window dressing, were
one where a coyote was depicted stealing a baby and another famously Margaret
Thatcher dressed as a dominatrix.
These unconventional displays gathered a lot of attention
when other shops may have had a tidy display, with pristine white floors
showing manikins standing in an orderly fashion showing the garments. By
harnessing current trends, popular public figures and injecting a little less
seriousness into designs really engaged with consumers. Doonan also regarded
text within his designs as important for drawing in customers as they would be inclined
to want to know what was being said within the displays, thus heightening the
consumer interest.
By interacting and engaging with audiences, the multifaceted
designs were able to able to draw in customers and give them something extra to
think about as opposed to safer, more conventional displays. Doonan's
presentation stressed the need not to conform to the expected way of doing
things in your industry no matter what it is. Humor and striking ideas can
create engagement for the consumers and can reinvent industry norms. One of the
best points that I got from the talk was that creative satisfaction may lurk in
the most unexpected of places so don't be afraid of taking a new profession in
an unexpected direction as it may be the key to success.

Check out Simon's
full presentation below:

About the Author:
Harry Kempe, a marketing intern at IIR USA, who works on various aspects of the
industry including social media, marketing analysis and media. He is a recent
graduate of Newcastle University who previously worked for EMAP Ltd. and WGSN
as a marketing assistant on events such as the World Architecture Festival,
World Retail Congress and Global Fashion Awards. He can be reached at hkempe@IIRUSA.com.