The Wave of the Future? Innovator Will Bateman Explains Wave Energy 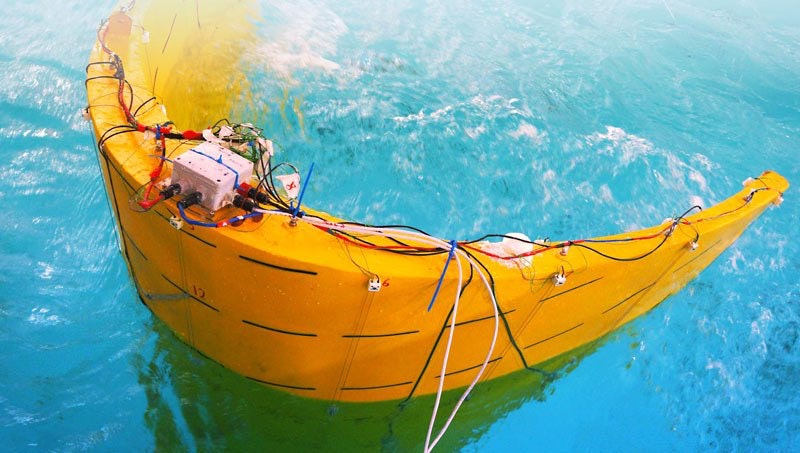 "Renewable energy experts peg wave energy at the place wind energy was decades ago: Many technologies are being tested, but none has emerged as an optimal solution that could sweep the globe. Yet with more than 50 percent of the population living within 50 miles of coastlines in the United States alone, the potential remains huge."
Brian Back, University of California

As Brian Black notes, the coming years may see wave energy move from a fringe idea to a commonplace solution because the "potential is huge". To get a better picture of just what wave energy entails and what its possibilities are I spoke with Will Bateman, the CEO and Founder of Zyba Limited. Zyba has developed a wave energy device called CCell, and they've made a commitment to "making wave energy a compelling alternative to diesel generation".

KNect365 Energy: Can you tell me how you utilize wave energy?

Will Bateman: Beneath ocean waves, the particles of water move in orbits: towards the shore beneath a crest then back towards the open ocean in a trough. Any swimmer will witnessed this, but may not have realise it. Our CCell device harnesses surge motion (forward/bank part of these particle orbits) within the waves, using a large curved flap. The motion of this flap is then used to drive a pump, which can either be used directly to pump a fluid or the pump fluid can be used to power an electrical generator. Collectively CCell represents a step change in performance for wave power delivering at least twice the power for half the cost of previous generations.

KNect365 Energy: Do you know how much of the world currently uses this type of energy? Can you give us any predictions about wave energy's future?

Will Bateman: Existing use of wave energy is minimal, perhaps 10 MW globally, and largely in the form of demonstration units under 100kW. This will certainly increase both in total output and individual unit size, but we don’t envisage individual units exceeding 1MW. There simply isn’t the appetite or funding for test building anything particularly large, so it is more likely that scale will be achieved with arrays of smaller individual units, say 100-250kW.

It is currently too early to know if wave-energy will ever reach a scale suitable for grid-scale power generation, which require farms producing around 100MW to justify the grid connection. However, there are certainly a broad range of existing applications that require less power, including for example fish farms, remote islands and desalination. Furthermore, as cheap power from waves becomes more readily available, it is likely that new applications will arise, including more extensive mariculture, CO2 capture, coral reef restoration, hydrogen generation for fuel cells, etc.

KNect365 Energy: Can you tell me why your company decided to service the micro and nano grid developments? Do you know how much of the world is actually using micro-grids?

Will Bateman: Micro-grid generation from distributed generation technologies is an international development focus, with an established growing market estimated to be worth £25B by 2021. Of particular importance to us is the associated 10% annual growth, which creates a compelling market for new equipment sales, versus trying to replace existing equipment.

Our focus on micro/nano grids stems primarily from an analysis of global reverse osmosis desalination plants, with ~27% of installed capacity requiring less than 50kW of power. In addition, many small islands (e.g. Eigg in the UK) operate their own micro-grids using diesel electricity generation. Where diesel is used, its costs are frequently in the range of 21 to 40 p/kWh despite recent reductions on fuel price. This is primarily due to the high cost of transporting the fuel (often in barrels) to these remote sites, We are seeing a gradual transformation to renewables, with the Pacific Islands, in particular, investing significantly in alternatives. For both the electrical and desalination sectors, we see CCell being deployed in concert with other renewables to deliver a more reliable base load, which is not dependent on time-of day (such as solar) and is out of phase with wind. In the desalination markets, there is also an opportunity to simply use the CCell device as a pump, helping to deliver high-pressure fluid to the reverse osmosis process.

It is also worth remembering that electricity is the backbone of our modern society. According to the IEA World Energy Outlook, global electricity consumption has tripled since 1973 and is forecast to grow a further 70% by 2035 to 32,000 TWh.

KNect365 Energy: Can you explain why microgrids are better for say, a town that faces storms? Could micro-grids replace macro-grids in our cities, even those not affected by bad storms?

Will Bateman: I’m not sure we’re especially qualified to answer this. Micro-grids do offer a simple means of gaining independence from larger systems; but this does come at a cost, namely they require a lot more maintenance and support from the local community. For remote communities, this is an accepted way of life; but I’m not sure the majority of residents within larger towns and cities would see much benefit from more locally generated power. We are however seeing a gradual shift towards distributed generation, with many more small independent generators entering the market, from nano scale solar panels on peoples' houses, through to small solar and/or wind farms; and hopefully in the future wave and tidal farms. If small producers can be linked to local users, e.g. solar power being used to charge local electric cars, then this could transform the marketing in favour of micro-grids with everyone potentially becoming both producers and consumers. The big challenge for micro-grids, particularly those reliant on renewable energy, is balancing peaks and troughs in supply and demand. Perhaps this might change, with the growing use of electric cars and ongoing research on energy storage.

However there is a often a disconnect between where electricity is generated and where it is used. For example, a significant amount of the UK's renewable energy supply comes from Scotland while the largest consumers are situated further south in England. So I don’t envisage that the national grids will be redundant any time soon.

Editors note: Recent power losses during major storms in the New York and New Jersey areas in the US drew attention to the fact that places with microgrids were still operating, while everyone else was in a blackout. Early-adopter communities such Brooklyn in the US are starting to develop community microgrids, so you may just hear about one in a community near you soon.

KNect365 Energy: Can you tell our readers, executives in Oil & Gas, LNG and other Energy industries, if they should be concerned with the nano or micro-grid? I recently read that Siemens was partnering with a New York-based start-up on a peer-to-peer energy project.

Will Bateman: I don’t believe traditional energy sectors should be concerned by the expansion of nano or micro-grid, in fact the opposite is possibly true. Competition from renewables is inevitable, but large scale renewable generation requires a national infrastructure to distribute the power from these intermittent sources.

This intermittency can be offset over a large geographical area through the national grids, in that the wind will always be blowing somewhere in Europe. However, micro-grids by their very definition will never have this benefit. Therefore, in situations where reliability of supply is paramount (i.e. a hospital) then more conventional generation will always be required as either the main energy supply or as a backup for local renewables.

But the race to decarbonise the world has already started, so if I were part of the existing Oil & Gas, LNG industries I'd be looking quickly at ways to leverage existing infrastructure through the development of synthetic fuels, like methanol, that could address energy storage needs and use renewables as a source.

Tweet to us at the new @KNect365Energy and let us know what you think about this technology! And we also invite you to join the discussion at our KNect Energy LinkedIn group.