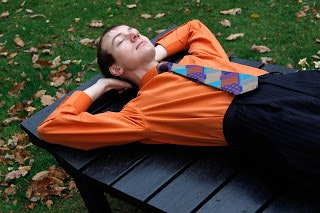 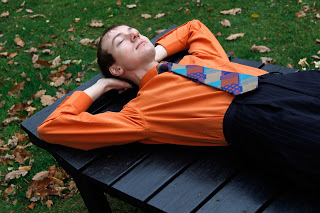 Working in an office can get 'crumby' am I right? Between staring at this bright orb of light for eight hours and having fluorescent lights beat down on you all day, life at the office can get mundane. Not to mention the chairs that, I know, we ALL slouch in. But what if you could change at least one part of this uncomfortable environment? What if'rather than sitting in these uncomfortable work chairs we were able to sit in a chair that has a sitting, standing, and'.wait for it'lying down position! Get your finger out of your ear, you heard correctly. In an article this week on Fast Company, a new product called the 'Altwork Station' allows you to work efficiently in all three of these positions. 'At the push of a button, the desk can tweak the position of everything or fully shift back into sitting or standing. As the back moves, the monitor moves with your eyes, the desk moves with your hands, and the back headrest shifts slightly in or out to best support your head.' According to the co-Founder of the station, Che Voigt, ''you can make one of two choices: you can say you're going to sit in this uncomfortable position because it's more protective of your body. Or, I think we can go the other route, which is, how about we just let people work the way they want to'?" This piece of furniture innovation and Design is also unique because it was designed by aerospace engineers. Think you want one? Starting price is at, $3,900, so step on up!

With so many stereotypes and preconceived notions about people, it's easy for individuals to come off as sexist and or racist. However, according to an article on Fast Company this week, a new card game invented by researchers from Dartmouth's Tiltfactor Lab will reprogram the way negative stereotypes affect people. The card game is called 'Buffalo: The Name-Dropping Game' and works a lot like the game 'war' where two people lay down cards at the same time. This time, however, one card will display and adjective and the other will display a noun. 'The goal? Come up with someone who fits that description. The experience feels like a fast-paced game of trivia, but under the surface, you're being reprogrammed. By chance, you may have to come up with a combination like 'multiracial superhero' or 'female visionary.' And rather than unconsciously associating Christopher Reeve with superheroes or Steve Jobs with visionaries'you're forced to consider alternatives like Miles Morales, the half-black, half-hispanic Spiderman, or Rosalind Franklin, the overlooked genius who was instrumental in discovering DNA.' The design of this game is certainly an excellent idea to try and get more people to think outside of the box! As the designers' state at the end of the article, '' what's important for people to take away is there are things you can bring into design practice: everyone can bring in attitudes to shift opinions through design choice.'' 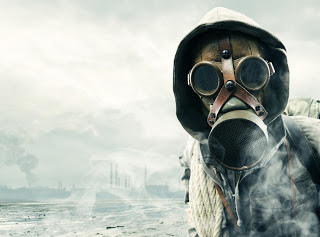 The design field usually strikes a light and easy going tone, with talk about designing a new look for modern homes and how to design a relaxing work chair. However, this week Fast Company wrote an article on design that is a little darker: the design of new gas masks for people in Israel. You don't have to be strictly following the news to be aware of the issues the Middle East, and Israel in specific, are facing. According to the article, most children walk to school carrying not only a lunchbox, but a gas mask in the other hand. 'Until 2014, when budgets were cut, the government handed gas masks to every citizen. But the ubiquity doesn't make them less terrifying to see lying around.' With that, the article introduces Israeli designer, Zlil Lazarovich, and her new design of a friendlier and less frightening mask that can help one prepare for chemical warfare. It is true that the standard gas mask appears in a frightening way, and, especially in times of war, elements of daily life (such as a gas mask) should not add to the chaos and fear. According to Lazarovich, ''the stressful situation, the constant news updates and the frequent dashes to the nearest shelter reminded me of the Gulf War' [When] I was a young child, and one of my most profound memories is the length that my parents took to make the situation seem more normal while we sat for hours in the chemically sealed room at home, with our gas masks on. They decorated their masks with colorful stickers and made funny gestures to try to make their own image look less intimidating to the four-year-old me.'' After reading the entirety of the article I am completely humbled and inspired by designers and women like Lazarovich who put their design skill set to improving conditions for people in terrifying places around the world. I highly recommend reading the full article here. 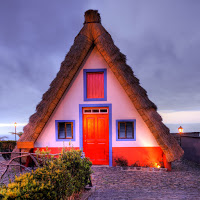 This week Fast Company released an article called, 'The Best Triangle House since the Pyramids' that details a new house designed by Swedish architect Leo Qvarsebo. The house is just as the title describes: in the shape of a triangle. According to the article, the house is designed in this particular way in order to give a stunning and unobstructed view of an 'idyllic vista in Dalarna.' The house displays large windows on each of the three different floors, with the first floor opening to a beautiful terrace. The article claims that Qvarsebo believe that, 'despite the fact it isn't very close to any trees, he thinks of it as a treehouse for adults. As such, there's a rope connected to the peak of the roof, so he and his kids can scale the facade. Even inside, though, climbing the home's central staircase is meant to feel like a treehouse.' This unique home has walls and ceilings that are lined with birch plywood which were sourced from a puzzle factory! The pictures of the house are definitely worth viewing by visiting the original article here.