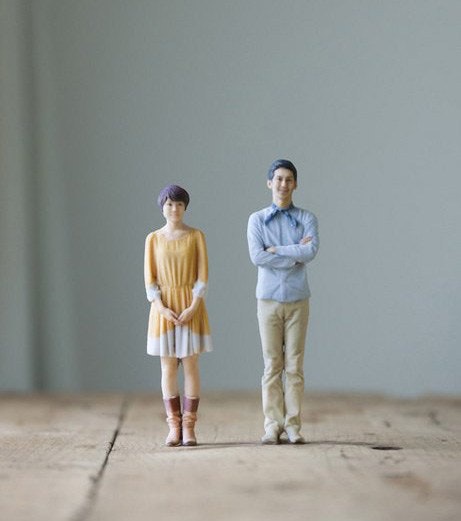 You may have seen this photo floating around the web this week. It's from a 3D Printer Photo Booth that makes figurines instead of photos.

Like something out of a modern daguerreotype, customers are 3D scanned in a process that requires them to stand still for 15 minutes and then a computer-refined image can be 3D printed.

This is not the first example we've seen of modern technology mixing with a desire for the physical object. For example, Printstagram will create a calender or stickers from your iPhone snapshots. iCrates, the once all-digital ode to the inherently un-digital music format of Vinyl is now planning a high quality print magazine via Kickstarter.

The very concept of Pinterest seems tied up in the idea. Browse any category on that site and you will find the DIY, the one-of-a-kind and the vintage dredged back up and put to modern use.

This is also a trend we've heard of at FUSE before. Back in 2011, Marco Beghin, president of Moleskine introduced a similar concept. Kristina Loring wrote of his session on the design mind blog:

"But Beghin wasn't arguing for us to bury our experiences in notebooks. He explained the obvious: the possibility of sharing analogue experience is amplified by the digital experiences we have through online storytelling. At the Salon di Mobile this week in Milan, Beghin announced that Moleskin would display the reverse phenomenon by capturing all online data happening around the event with a 3ft high robot and transcribing it on pieces of paper to create a physical expression of the conversations happening digitally."

Where Moleskin may have been on the edges almost two years ago, is this trend now mainstream? Are there any examples of iconic brands embracing it? Will we continue to desire objects...perhaps as The New Luxury? Or is this simply a momentary backlash against an increasingly digital world?

Michelle LeBlanc is a Social Media Strategist at IIR USA with a
specialization in marketing, she likes vinyl and also the Internet, and she may be reached at mleblanc@iirusa.com