A Historical Perspective on Shipping in the Canadian Arctic 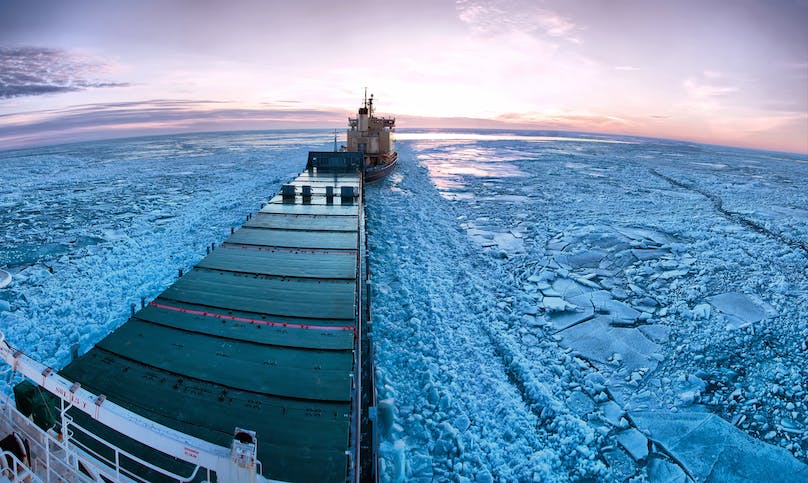 An interview with Christopher Wright, author of Arctic Cargo: A History of Marine Transportation in Canada’s North

Christopher Wright is a marine logistics consultant, a maritime historian and a trusted authority on shipping in the Arctic. Although he is British by birth, he has lived and worked in Canada since the early 1980’s. A former UK Chamber of Shipping employee, Wright has also been involved with the reintroduction of overnight cruising to the Great Lakes, and has provided strategic analysis of port facilities and transportation in Nunavut and the North West territories.

His first book, Arctic Cargo: A History of Marine Transportation in Canada’s North, was published in 2016. It will be followed by a new work for the History Press on the evolution of polar cruising, which is being written with co-author Kevin Griffin.

You can hear more from Christopher Wright this October at the Arctic Shipping Forum North America.

When I call Christopher Wright from the KNect365 Maritime offices in London, the Northern Hemisphere is in the grip of an unprecedented heatwave. Nova Scotia, where Wright lives, is no exception. He tells me that temperatures are expected to reach an “unheard of” 30 degrees Celsius. It is an indication of what the future of the Arctic and the sub-polar regions may look like.

While working on his book, Arctic Cargo: A History of Marine Transportation in Canada’s North, Wright’s gaze was directed very much in the other direction – towards the Arctic’s past. The volume is impressive in scope, encompassing a 430 year period of history starting with English privateer Martin Frobisher‘s first (and ultimately fruitless) expedition in search of gold on Baffin Island in 1576-1578, through to the present day.

Speaking to Wright, one has a sense of the personality that goes into shaping such a work. He speaks knowledgeably on a diverse range of subjects, and delivers his remarks with precision. He will often pause an explanation of some historical oddity to look for a reference, or search for an exact date. During the pauses one can hear the shuffling of papers, and the occasional sound of seagulls muffled by the fuzzy transatlantic line.

It is this painstaking attention to detail that allowed Wright to overcome some of the difficulties involved in writing the book. It is also what provided the inspiration for the work. Wright wanted to “provide a single source for information on the Maritime history of the Canadian Arctic”, he tells me. “It was obvious that there really wasn’t anything out there providing information on cargo activities... [there were] a lot of people in government and people in Academia asking whether I knew of a source. Also people in the industry asking whether I had any record of what had happened – and at the time I didn’t."

Wright’s solution was to go about compiling a suitable record himself. His objective was not to create a “narrative document” – the kind of book one has to read from cover to cover – but something more practical. What was needed, he decided, was a reference work with chapters that could be read individually, depending on the needs and interests of the reader.

Researching the book was far from straightforward. A lack of accurate record keeping among Arctic shipping operators in Canadian waters presented a real challenge. Wright had to piece the details together from a variety of different sources, including company annual reports and third-party sources, verifying his information wherever possible to ensure accuracy. “It was an interesting exercise, let’s put it that way,” Wright tells me.

Unfortunately, poor record keeping is a problem that isn’t showing any signs of changing. “I just don’t believe that people think about it, and think about the future, whether other people would need to keep the information,” Wright says. With the introduction of digital technology, historians a few generations from now may have an even harder time of it. “These days with everything being electronic it tends to be very ephemeral,” Wright says. “In the past when information was written down, there was a chance that there was a record of it somewhere. But nowadays that may not be the case.”

Sloppy record keeping is only one example of where today’s Arctic shipping operations may not have progressed as much as we might think. Although voyages in the Arctic are in general safer today than they have ever been, the demands placed upon modern shipping have led to some unfortunate compromises. Wright highlights the introduction of more bulbous bow designs as a particular concern.

For the most part, what he observed whilst researching the period covered by the book was a “constant progression of technology in terms of how vessels were propelled and how they were built.” A product of this progression is that modern ships tend to have bulbous bow designs, even those with an ice class. But, as Wright tells me, “bulbous bows and ice don’t mix.”

The explanation comes down to the kind of cargo Arctic vessels are expected to transport. “Ice class depends on the ship being down to its marks, with the bulbous bow well below the water line,” Wright says. But “cargo destined for Arctic communities tends to be voluminous – a ship filled out with 20,000m³ may only be carrying 5000 tonnes, even though it has a deadweight tonnage of 12,000 tonnes. You can see what the problem is, and the ship’s Canada Type B or Baltic 1A ice class may be compromised, which is why they have to be very careful around ice.”

It’s an interesting lesson in the non-linearity of progress, and one that, as a historian, Wright is well placed to give. It’s easy to overlook just how ably previous generations were able to perform in spite of the challenges imposed by less advanced technology. Wright presents the example of the Hudson’s Bay Company, who dominated the North American fur trade (and thus Arctic vessel traffic) for several centuries. “On the whole, given the fact that the vessels were sailing ships and subject to the whims of the weather, they did pretty well in terms of not losing too many ships over three hundred years,” he says.

By the early 20th century, vessels had become even more resilient. “One of the more successful vessels was the Nascopie, which was built in 1912 for the Hudson’s Bay Company” Wright tells me. “It managed to keep going until late in the war years, when she unfortunately hit a reef off of Cape Dorset and sank. It wasn’t the ice that sank her.”

Wright is full of vivid and sometimes surprising historical details of this kind, uncovered during his research. For him, the most unexpected discovery made was how close Canada’s Arctic Port in Churchill came to not existing at all. For a while, interest was instead focused on an alternative site at Port Nelson – and this despite some fairly heavy criticism. “It was dreadful,” Wright says. “None of the navigators who looked at Port Nelson liked it, and said so in no uncertain terms, but of course nobody believed them… decisions were being made by engineers who had absolutely no idea about the maritime side of it. But they thought they did.”

Ultimately the right decision was made, albeit for the wrong reasons. Churchill was used as a political bargaining chip, the federal government agreeing to build the port “as a trade-off to get the support of the Prairie provinces for the construction of the Welland canal”.

The research for Wright’s next volume, the history of polar cruising, is also turning up some interesting facts. Often conceived of as a recent phenomenon, Wright’s research makes clear that the history of cruise voyages to the polar regions is a surprisingly long one. As early as 1875, Thomas Cook was chartering voyages to the North Cape for small groups of passengers in search of a different kind of travel experience. Curiously, Wright has also found evidence of passengers paying to observe whaling trips in the vicinity of Spitsbergen in the 1890’s. These voyages would attract as many as 70 cruise tourists, willing to endure icy conditions for a glimpse of a whale hunt.

I ask him what he thinks it is about the Arctic that provides such a draw to certain kinds of travellers. “The way in which Cook positioned the North Cape, it was considered to be the end of the world,” Wright says. “It’s people’s interest in going somewhere totally different… and I think it’s something that they could then go and boast about.” An article he stumbled across in a late 19th Century copy of Harper’s Bazaar, describing an excursion to the Arctic, pays testimony to this motivation. It is a draw that no doubt survives in today’s plenitude of adventure tourism packages and travel blogs.

It is also the reason why Wright thinks it unlikely that there will be a repeat of the Crystal Serenity’s landmark voyage through the North West Passage. With the novelty of that journey – the first ever made by a large cruise ship by that route – now exhausted, Wright expects attention to shift elsewhere. “They’ll stay on the Greenland coast, the large ships… for reasons of accessibility”, he says. By hiring the Ernest Shackleton as an escort, Crystal set a “very high bar for large, non-ice-class ships”. Future voyages are unlikely to have the same margins, Wright predicts, so North West Passage cruises are likely to once more become the province of smaller, expedition size ships.

For those determined to book a passage to the end of the world, that is unlikely to lessen the journey’s appeal.

If you’d like to hear more of Christopher Wright’s thoughts on polar cruising, you can join him at the Arctic Shipping Forum North America, where he will deliver a presentation on the topic. His presentation will include the latest figures for Arctic and Antarctic cruise operations.

You can find out more about Christopher and his work on his website.