Nanosatellites are poised to make polar connectivity much, much cheaper 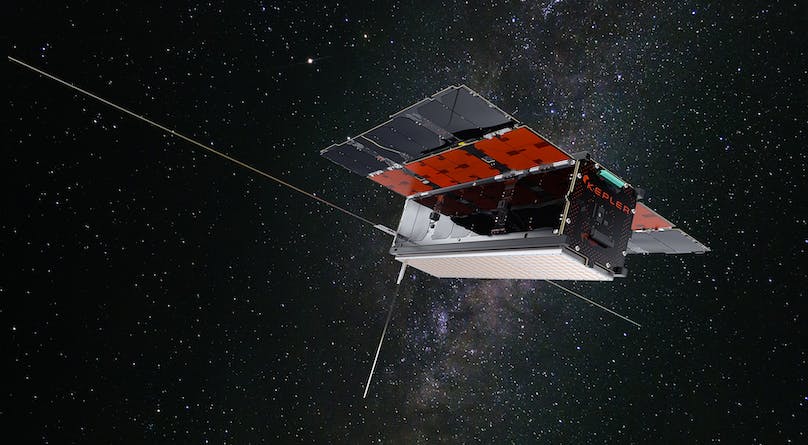 As ship traffic through the polar regions increases, these erstwhile wildernesses are becoming ever more important to the global economy. This is particularly true of the Canadian Arctic, where the volume of ship traffic has increased almost threefold over the last quarter century, according to a recent study.

But there are significant barriers that continue to hinder economic expansion in the polar regions. Among these is the absence of good telecommunications solutions available to vessel operators, researchers and others working in the high northern and low southern latitudes.

In our increasingly interconnected world, where data plays a role in virtually every facet of the modern economy, limiting or foregoing communication imposes significant costs – both in lost efficiencies and in lost revenues. But traditional solutions are also expensive. Developing fixed telecommunications infrastructure to service the Arctic and Antarctic could cost billions.

Perhaps there is a better way. KNect365 Maritime spoke to Nathan Robinson from Kepler Communications, a Canadian company proposing an innovative solution. By deploying numerous small, shoebox-sized nanosatellites in non-geostationary orbits around both poles, Kepler aim to provide a connectivity solution that will cost one hundred times less than the terrestrial and satellite communications options currently available. That’s a pretty big saving.

In our interview with Nathan, we discussed how Kepler’s technology works, what applications it is most useful for, and the future of IoT in the Arctic shipping industry.

What is the state of the traditional fixed infrastructure in the Arctic region currently, and how will your technology be used to supplement it?

Currently, the northernmost parts of the Arctic rely only on VHF/HF radio communications and Iridium satellite voice and data services. Both are low-frequency solutions, used mainly for operational or search and rescue activities. Above 65 degrees latitude, the quality of traditional geostationary satellites deteriorates, where the low elevation angle signals can be blocked by trees, mountains, and even rolling waves over water. Beyond 80 degrees latitude, these satellites completely drop off. The limited bandwidth and high prices for satellite data services represent a substantial opportunity to introduce our solution, which will provide economical data connectivity to customers in these regions. We see how the Arctic is currently underserved when it comes to high-bandwidth communication platforms. Moreover, there are wide areas of the Arctic region that have no terrestrial connectivity at all, and that is where our solution comes into play.

Fixed infrastructure, such as fiber, copper, or microwave backhaul, is mostly available in the Scandinavian countries, such as Sweden, Norway, and Finland, where population density is high. It is pretty much non-existent in the oceans, northern Canada, parts of Alaska, and most of northern Russia.

Your satellites are non-geostationary. How do you ensure that each pole is constantly serviced by a satellite? How many satellites would be needed to provide round-the-clock coverage?

Kepler has a single satellite in operation today, with a second joining shortly. What we have discovered is there is value in providing data backhaul capacity today to underserved regions, which is what our Store-and-Forward service provides.  It's not real-time, but instead provides a cost-efficient way to move GB's of data daily.  By virtue of our polar orbit, the polar regions see the greatest number of passes of our satellite -- which means our highest level of service, at the outset, will be at the poles. The number of satellites needed to provide round-the-clock coverage depends on the latitudes you want to serve and the orbits you want to go to. For instance, a highly-elliptical orbit could offer persistent coverage of the Arctic with as little as three satellites. We are starting with a few satellites in low-earth orbit which give us the ability to deliver Store-and-Forward services, and may adapt future deployments based on where we see customer demand.

What are the costs associated with bringing a single nanosatellite into orbit? Who does Kepler contract to provide this service?

Our current satellite is a 3U CubeSat, which means it measures approximately 10 X 10 X 30cm. It weights ~6KG. Compare this to a traditional geostationary satellite that may be the size of a bus, and weigh hundreds of kg. The cost for us is an order of magnitude lower on a per-satellite basis. Typically, it amounts to less than half a million USD, including launch and development. We expect this to drop as new launch vehicles come online and we reach better economies of scale on the satellite. We’ve recently released a request for information for our GEN1 launch provider so in the coming weeks and months we should have a clearer picture of who will be our launch provider.

Kepler’s service is designed to be used for “delay-tolerant data”. What level of delay do you expect, and what forms of data transmission would your service be most suited to?

Put simply, our service will be of interest to anyone who has large quantities of data to move, that are currently prohibited from doing so either due to cost, or lack of coverage.    Delay tolerant is potentially any type of data that isn't required in real time -- i.e., at present our service cannot replace voice, but for everything else, we are an option. Especially at the poles, where research groups, search & rescue vessels, icebreakers, and oil & gas operators may be generating GBs of data each day with no way to move it short of shuttling a hard-drive. Our service can make that data available at any other point on the globe for processing and analysis within a matter of hours. With a single satellite, we can move data from the poles in around 90 minutes. As new satellites are added, this number reduces.

How would extreme weather interfere with the type of satellite connectivity Kepler provides? Is there a danger that connectivity might be lost if the weather was too challenging?

Weather, especially at the poles, is always a factor to be considered. However, at this stage, when we're not providing real-time connectivity and instead offering a store-and-forward service, any loss of connectivity would have minimal impact as even if an entire pass was missed, you'd simply wait for the next pass to occur and transfer your data then. It's also worth noting that Ku spectrum is less susceptible to 'rain fade' then Ka-band.

Kepler’s solution is 100 times cheaper than existing terrestrial and satellite connectivity. How are you able to bring costs down to this extent?

As mentioned above, CubeSats in LEO are orders-of-magnitude less expensive to deploy than traditional GEO satellites.  Similarly, satellites can provide coverage where terrestrial networks are either cost-prohibitive or simply impossible to install due to the terrain.  Our value is enabling connectivity and enabling the movement of GBs of data where it previously wasn't possible.

Have you seen much interest from the Arctic shipping industry about your solution? What would be your message to shipowners sceptical about Kepler Communications’ technology?

A majority of our early technology demonstrations and deployments are taking place with polar shipping vessel operators. There are a few reasons for this: first, because of our polar orbit, we are providing high-bandwidth coverage where none existed previously. Second, many maritime operators already have Ku-band antennas installed, which makes adding our service relatively easy. We can repurpose existing Ku-band antennas to make use of our network so no major hardware changes are required on the ship. For anyone skeptical of the value, I'd say let's connect and take a look at your data requirements and see if we can either help you move more then you're able to today, and perhaps reduce your costs while we are at it. Our solution at the early stages has a unique value proposition and isn't applicable to all problems - we'll help you identify if it's a fit as our top priority is finding users who will benefit and will play a role in shaping future iterations of the solutions.

What stage is your polar connectivity project currently at?

We are currently undertaking field trials with early customers. What this means is that the customer has the opportunity to try out the service, and tell us exactly what additions they want to see for future improvements. We want to make sure early customers are rewarded with a solution that works perfectly for their needs and gives them long term value.

Where does the polar project fit in with your company’s broader offering and vision?

As mentioned above, due to our polar orbit our level of service is greatest at the poles, which makes them a perfect entry point for our service. As a result of the conversations we're having, we're also gaining valuable insight and feedback into our future IoT offering, which is going directly into the development roadmap. IoT, as the buzz suggests, hold great promise for industries and applications around the globe, and the Arctic is no exception. We are seeing applications in asset tracking, weather stations, remote sensor networks, ice monitoring, etc. The polar regions are perfect for IoT because of the benefit of remotely monitoring and controlling assets where sending a human is either dangerous or impractical for parts of the year. It is well suited for satellite IoT because other IoT solutions, such as low-power mesh networks, will only work if there's satellite connectivity back to base. We believe IoT has tremendous potential, potential that can only be fully achieved with a satellite link.