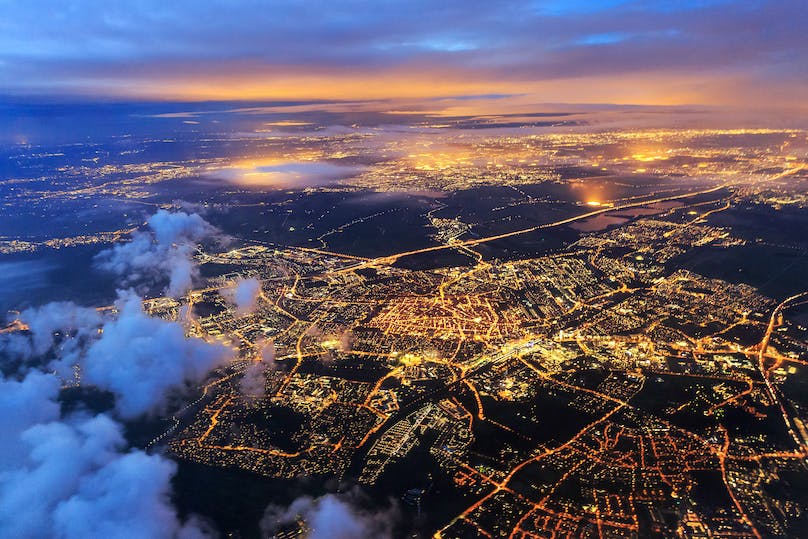 The numbers don’t lie, the air travel market has almost tripled in the last 20 years. This growth has been aided by the average growth in passengers’ living standards, more open trade, and economical growth. This trend, however, may not continue for the next 20 years. In this article, Brian Pearce, Chief Economist of International Air Transport Association (IATA), explores the new macro-economical trends that are likely to impact aviation.

Over the past two decades the number of commercial airline (and airport) passengers worldwide grew by an average of 5.5% each year, which almost tripled the size of the air travel market over that period. That expansion took place despite major shocks such as the terrorist attacks of 9-11 and the economic dislocations caused by the bursting of the dot.com bubble and the global financial crisis. Such shocks are, by their nature, unpredictable. But, even if we exclude similar future shocks, should we expect the next 20 years to grow at a similar pace? The industry’s ‘rule of thumb’ for growth has been ‘around 5%’ for a long time.

A large part of past growth in air travel was driven by an increase in trip frequency, a rise in the average number of trips by air taken annually by each member of the population, as shown in table 1. Back in 1998 the average member of the world’s population flew once every four years. By last year trip frequency had risen to one trip every 1.7 years. Trip frequency varies dramatically across countries, largely reflecting living standards, from an average of once every 5 months in the US to only once every 7.5 years in India. But the average for all markets has been growing steadily over the past two decades. 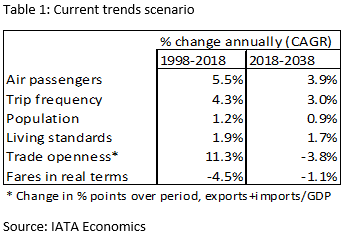 That rise in trip frequency was driven partly by the 1.9% p.a. average rise in living standards (measured by GDP per capita). But there has also been a lot of price stimulation over this period with air fares in real or inflation-adjusted terms falling by more than half or an average of 4.5% a year. Cheaper air travel was helped by a long period of liberalising trade and aviation policies, which was reflected in the 11.3%-point rise in the proportion of world trade in GDP. This openness increased competition, drove prices down, and boosted new city-pair connections (which is equivalent to a fare cut as travel times fall).

The next 20 years look less buoyant, even in the absence of damaging shocks. The biggest change is in trade openness, reflecting rising protectionism and, more recently, explicit trade wars. Trade openness is forecast to decline over the next two decades. In this environment there will be less opportunity for price stimulation, although prices will continue to fall as technology advances, and so the boost to future air travel growth from this is expected to be around one-third of the impetus of the past two decades. Population growth is expected to slow. Better living standards rely on productivity gains, which have also slowed and are expected to be slower over the next twenty years than the past two decades. All together the drivers of our ‘current trends’ scenario look set to deliver average growth of just 3.9%. That will still double the size of the air travel market in twenty years’ time, but that is not the scale of expansion of the past twenty years, when the market tripled.

A faster expansion is possible under some scenarios. But we estimate that a return to 5.5% p.a. average growth in passenger numbers would take a major shift in economic and trade policies, a return to the pattern of globalisation and liberalisation that we saw before the global financial crisis. A decade has passed since we last saw such a policy environment. Given that we are currently in the middle of a trade war between the US and China, on the brink of the UK leaving the European Union, and seeing other effects from the rise in populism, it seems that this scenario has a rather low probability. 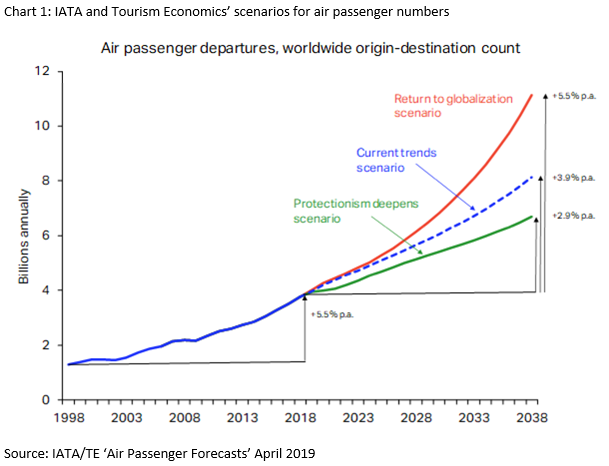 The consensus view, which we interpret as close to our ‘current trends’ scenario, is expecting a resolution to the trade wars leading to a partial rebound in trade openness and a slightly more dynamic economic growth path. That view might be optimistic. Increased tariffs and retaliatory measures may be a new way of doing trade business, rather than temporary. That is the basis of our ‘Protectionism deepens’ scenario. There is still growth but with 2.9% p.a. average growth air travel markets will not double in the next twenty years.

The growing pressures from climate change have also increased our conviction that future growth will be significantly slower than in the past. The industry is addressing the issue of its CO2 emissions with the CORSIA cap-and-offset scheme and by investing in sustainable aviation fuels. But the ‘Flygskam’ movement in Northern Europe shows it is possible that at least some age groups in some high-income countries will decide to reduce the number of flights they take, over and above the impact of governments imposing climate-related costs on air travel.

This could slow or stop outbound air passenger market growth in Europe and possibly other high-income countries. However, it seems less likely to stop the growth of inbound flows from Asia and other emerging markets. The pressure on airport infrastructure is still likely to grow but the path is less certain than ever. Addressing these growing uncertainties with flexible and modular construction options look increasingly sensible.

Join Kate Markhvida, Senior Economist, IATA, at GAD World where she will explore the growth opportunities under the threat of economic downturn.