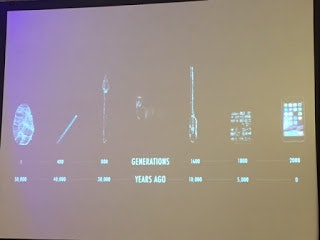 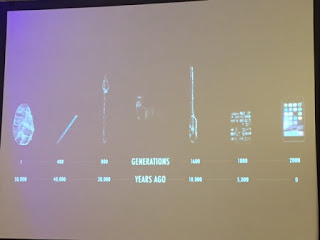 Human
Evolution of Innovation
By
Kevin Ashton
Ashton opened the conference by taking a picture of the crowd
and publishing it on Twitter, which he remarked was revolutionary a decade ago.
"Innovation moves from ridiculous to miraculous to
monotonous at light speed because we forget how exciting the present moment can
be," Ashton taunts the audience.
The driving question is how do we get from
ridiculous to monotonous so fast? How did we get to here?
This story begins with a Hand Axe, a rock, the
first human tool. Early humans''many species of humans''made and used these
tools. Axes were the first general-purpose tool. The technology didn't change
for millions of years.
Contrast that rate of innovation to all of the
changes from 50,000 years ago onward. This timeline is roughly 2,000
generations of humanity.
'What happened 50,000 years ago'? Someone decided
to make the hand axe better'and it was the change that changed the world. It
took 20,000 develop a spear, and '10,000 after that point, we domesticated our
first animals. Five thousand years ago we had the first writing'and the first
iPhone came 5,000 years later.'
Is there a process that says that innovation has
sped up? 'The answer is no," says Ashton. Population numbers have grown from 25
thousand to 7.5 billion in the same time. "When we invented agriculture there
were only five million of us, and 50 million when writing was developed.' Enter
the idea of knowledge workers.
Ashton does not believe in the 'myth of overpopulation,'
he says, 'What you see here is, the more population we have, the more we can
sustain. We have more calories and more food than ever.'
'I encourage you to step back and think about
innovation as how the human race thrives and survives.'
In a letter Mozart described his creative
process, and here is a paraphrase: 'all of my best music comes to me in a
moment if I am in a good mood and by myself'and it comes to me fully formed and
all I have to do is write it down.' The timing of this letter was the ideal,
Romantic alternative to the rise of Darwinism, ushering in the role of the Genius (defined by Ashton with a wry grin as 'a special kind of white guy who has flashes of inspiration.')
Ashton then debunks this myth of genius'as the
letter is a fake, written for sociopolitical reasons. Creativity is not magical
and special. It is open to everyone who wants to work hard.
Ashton then revisited the Wright Brothers story.
What is the problem of flight? 'Balance.'
Then, the Wright brothers took their knowledge of
bicycle balance and applied it to the problem of sustained flight, hence, 'how
to fly a horse.' In 1900, they fly a glider, a prototype, fly it, and made some
incremental changes. They added propellers as a later phase in solving the
problem.
There was no magic moment. 'They took a step and
then another step, and very gradually solved the many problems until they have
something that works.' This is how human beings create'not in a flash of
genius.
Failing is a skill'you need to find a way to
mitigate risk and learn, he claims. Hence, the team that created the parachute used a
mannequin to test, evaluate, and learn. 'You can't fail smart if you get fired,
die, or end up in jail.' Later, another inventor demanded he demonstrate his
parachute himself'and died in a bad landing. The lesson: go slowly as needed
and manage the pressures for speed and glory.
'Which brings us to the iPhone, which did not
appear out of nowhere,' Ashton said. The iPhone lineage goes back to touch
pads, track pads, and the LG Prada. 'The reality is that a whole bunch of different
things converged, all of these incremental steps were taken and put
together'and that is how innovation happens.'
'Each time you invent a new tool, you invent a
new category'think about that. The hand axe had to happen to have the spear and
the spear had to happen to lead to the domestication of animals. The same story
is true in your work,' claims Ashton.
Don't forget that 'milk is a technology and
cheese is a technology.' Today we have gone from a hand axe to traveling to different moons
and planets, into outer space.
Michael Graber is the
managing partner of the Southern Growth Studio, an innovation and strategic
growth firm based in Memphis, TN and the author of Going Electric. Visit www.southerngrowthstudio.com to learn more.