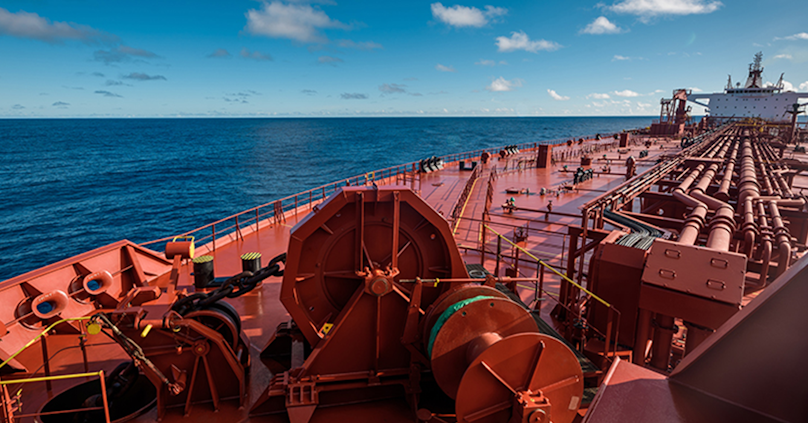 This leaves floating storage deployment as the biggest driver of fourth quarter of the year tanker earnings, amid stalling consumption of land and air transport fuels that will deepen crude and refined product contango spreads.

The International Energy Agency lowered its second half of 2020 oil demand forecast for a second consecutive month in its monthly report, saying 2020 demand would be 91.7m barrels per day.

The crude market outlook was “even more fragile” than a month ago and “the path ahead is treacherous amid surging Covid-19 cases in many parts of the world,” the Paris-based agency added.

“We expect the recovery in oil demand to decelerate markedly in the second half of 2020, with most of the easy gains already achieved,” it said. “The economic slowdown will take months to reverse completely, while certain sectors such as aviation are unlikely to return to their pre-pandemic levels of consumption even next year.”

The report makes grim reading for owners and operators of the global fleet of crude tankers, which last year shipped about 50m bpd of the world’s estimated supply of 100m bpd of crude and condensate.

Along with refined products, total international seaborne tanker trading was estimated at nearly 3.2bn tonnes in 2018, out of total 11bn tonnes, according to the United Nations Conference on Trade and Development.

At the height of lockdown restrictions in April and May, demand for refined products slumped by one third, while oil prices plunged to a 21-year low, triggering contango market conditions that saw tankers deployed for floating storage at record levels through to August.

Contango trades arise when the future price is higher than the spot price, typically when immediate demand for a product is very weak.

When the difference in the two prices is wide enough, traders can buy and store oil for later sale at a profit. Tankers can be typically used if land-based storage is not available or the chartering costs make such economics work.

Contango trades helped shield tankers from the worst of the lockdown-induced demand downturns by deploying as much as 10% of the trading fleet of panamax-sized ships through to very large crude carriers for floating storage.

But with these trades unwinding and Chinese port congestion easing, earnings had hovered near operating expenses for nearly six weeks by mid-to-late September, even as oil exports had rebound from some of the lowest levels seen in nearly 30 years through June.

The IEA’s assessment also places doubt over any seasonal rise in oil demand because of the northern hemisphere winter and increased need for gasoil and heating oil that usually accelerates tanker spot earnings at the beginning of October.

The key this quarter will be in the pace of demand for transport fuels, and one of these indicators will be teleworking, according to the IEA.

“Teleworking is now a significant component in assessing the level of oil demand,” it said, estimating public transport worldwide is down around 25% to 50% from January levels.

At least 20% of trips were work-related, the IEA said, citing monthly fuel statistics for Organisation for Economic Development and Co-operation countries, and Google data.

The agency lowered its demand forecasts for gasoline by 450,000 bpd and by 260,000 bpd lower for diesel, as a result of workers not travelling to the office.

Large product stocks will take another two to three months to absorb excess stocks from April and May, it said, with bearish fundamentals for refineries and crack spreads, especially for middle distillates which include gasoil, diesel and jet fuel.

Owners and operators of product tankers, already digesting hurricane-related refinery shutdowns at the exporting hub of the US Gulf, are likely to see further falls in regional business.

Whether contango trades for gasoil and diesel will shield them from further collapsing earnings is doubtful.

“Liquefied petroleum gas, ethane and naphtha demand is forecast to fall little this year on resilient petrochemical feedstock demand and residential use for LPG,” the report said.

“Fuel oil demand, which includes marine bunker as well as power generation and industrial uses, is forecast to decline by only 400,000 bpd or 6.3% in 2020. 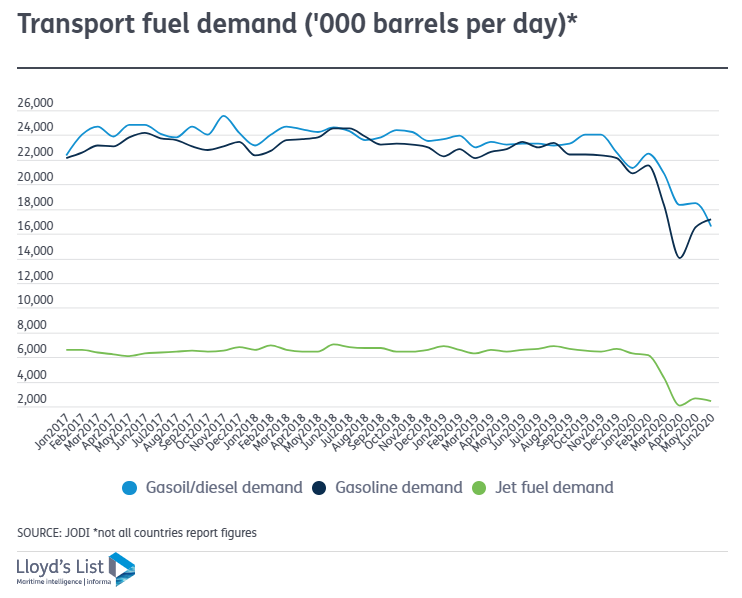 “Producing to meet this new demand profile means refiners must make further shifts in the yield slate — from gasoline and middle distillates to naphtha, fuel oil and other products.

“At the same time, geography will continue to be a major factor in refiners’ ability to survive. In the Atlantic basin, the demand recovery is expected to be slower than in the east of Suez.

“Next year, oil demand in the Atlantic basin will be lower than in 2010, while east of Suez demand is forecast to be above the 2018 level.

“In turn, refining activity is recovering faster east of Suez, almost reaching 2019 levels in 2021, but in the Atlantic Basin runs are expected to remain at the bottom of the range for the past three decades.” 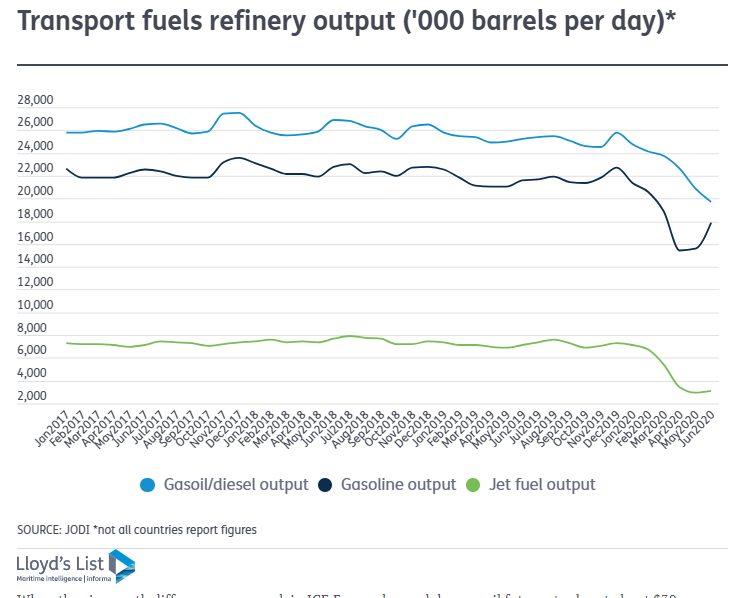 When the six-month difference, or spread, in ICE Europe low-sulphur gasoil futures trades at about $30 per tonne, contango conditions arise that support floating storage.

Calculations show that such a contango play, based on current VLCC time charter rates would yield a $2.3m profit over the period, calculations by Lloyd’s List show.

Savvy traders who forecast the steepening contango the earliest have already chartered vessels for storage in past weeks, data from shipbrokers reveals. But numbers and hype do not match levels seen in April and May.

Global diesel and gasoil exports fell month on month to reach the lowest in 11 years, and shipments of jet fuel plunged to 2004 levels. 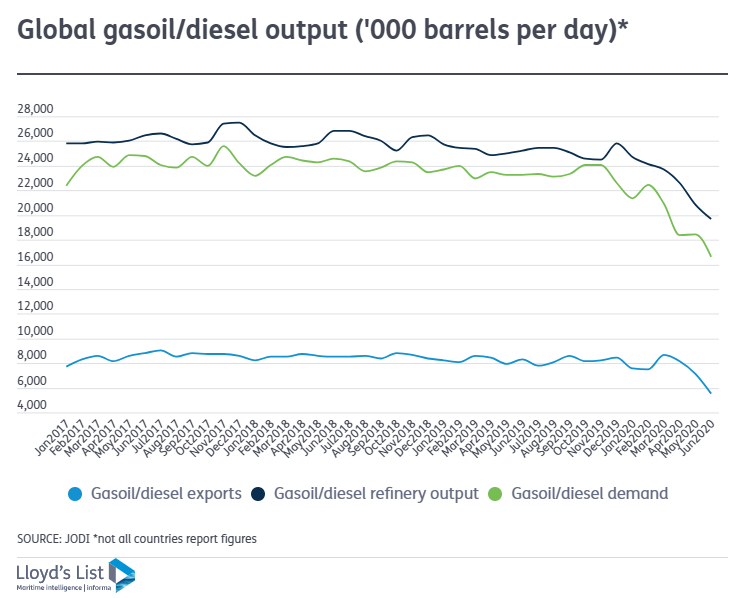 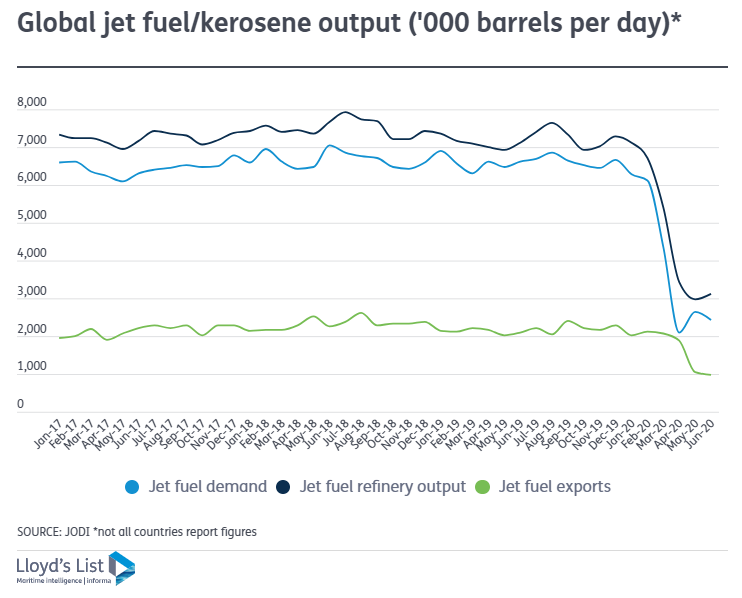 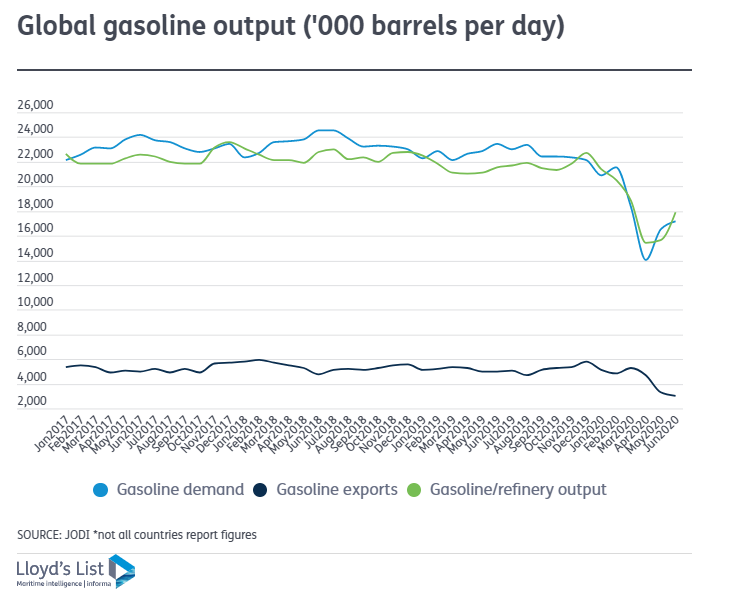 Preliminary statistics released today by the Joint Organisation of Data Initiatives cover the period just before any so-called second wave and show any recovery in middle distillate demand seen since April has stalled.

Middle distillates cover the so-called middle of the crude barrel, and include jet fuel, diesel and gasoil. They have been the most affected products by the pandemic, while overall July demand figures are a third lower year on year.

Total gasoil and diesel demand dipped 11% month on month, according to Jodi figures and compare with 23.3m bpd a year ago.