Disruption is removing a revenue stream from a market 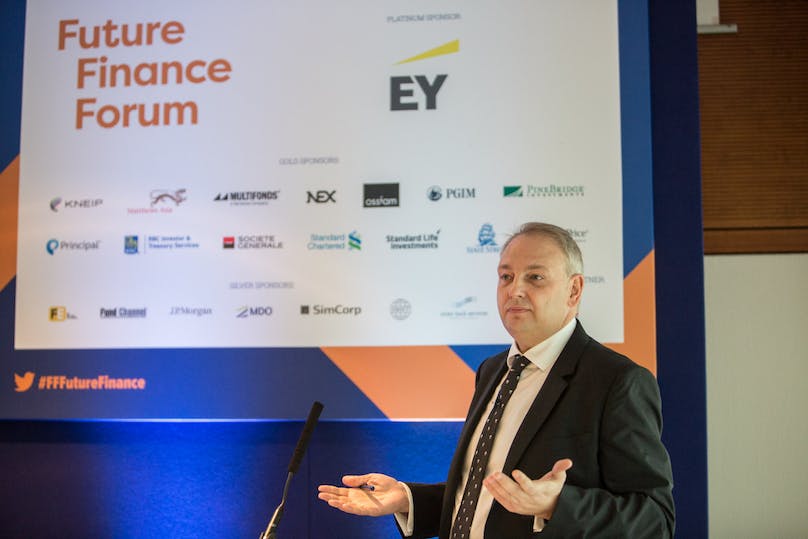 Day two of Fund Forum in Berlin saw Neil Ward, former general manager, Global Business Operations at Skype give a one-man talk entitled ‘What can asset management learn from Skype’s approach to digital disruption pricing and winning customer engagement.’ However that overly wordy session title doesn’t give Ward’s talk justice. An alternative title should have been, ‘Here is a congenial, slightly podgy middle aged man, in a tie (who won’t scare you), but will give you a beginner’s guide to digital disruption you should all pay attention to.’ (Again, too wordy – but it gets the point across)

Ward, a self-described ‘old-fart-nial’ (as opposed to a millennial) - who also admitted his knowledge of the fund management industry extended to knowing how it is spelled - gave a talk on digital disruption, I have seen many times before.

These talks are usually given by a hyper-young man who dances across the stage, shouting out gleeful warnings about how ‘your industry needs to innovate or die!’ Or a super slim, serial entrepreneur, fresh off the plane from Silicon Valley, who overdoses the audience with videos of young people dancing to holograms or babies playing with iPads in a way that usually makes the more traditional banking and financial services types tune out, disregard and disengage.

Whoever booked Ward was a genius. And he gave the best definition of digital disruption I have ever heard.

“Disruption is taking a revenue stream out of a market.” (Brevity beats wordiness, every time)

He spoke about his career, which started when UK telecoms giant BT, still charged £180 for a land line (I remember and still feel the anger). He worked for Virgin Media. Virgin decided to offer customers a free land line (if they also bought TV cable and broadband). But what that did was it removed BT’s revenue stream from the market. It disrupted. Later BT had to do a deal with Sky to gain those telephone customers back (a company Ward also worked for).

Whoever booked Ward was a genius. And he gave the best definition of digital disruption I have ever heard.

Most people know Skype as a free way to make video calls to their friends and family. In 2011 it was bought by Microsoft. As part of the acquisition, Microsoft renamed the Lync Server, Skype for Business, leveraging its own infrastructure to sell it through their extensive network of business clients for their Office tools. The consumer calls remained free. Skype sacrificed $1 billion worth of customer business in order to gain $3 billion worth of business clients. They removed $1 billion in revenue, disrupted themselves, and gained a larger revenue stream somewhere else.

However, Ward didn’t hold back on his warnings for the fund management industry. ‘All it could take is one of these firms to get together with a startup – which provides the right data and technology – to order to gain customer and market insights to remove a revenue stream and disrupt the market,’ he said.

So, what can the asset management industry do to gain a foothold on digital transformation? According to Ward, partnership and collaboration are paramount, but data is key.

Create a map of the market, with all the firms and organisations and businesses impacting the industry. Gather data to back up your assumptions and collate customer feedback. “If a ‘consultant’ advises that you install ‘a shelf this high’ – make sure you can come back and say ‘my data says I don’t have to,” he said.

Next, he advises taking advantage of the clubby environment of the asset management sector. “You all know each other, you all dance together,” he added. “Think of how you can partner together, for both glory and testing.”

So, what can the asset management industry do to gain a foothold on digital transformation? Partnership and collaboration are paramount, but data is key.

Finally, he advises not to think of digital disruption as something that will replace your business, but instead one that will enhance it. “The fund management industry is about people and relationships,” he says. “I do not believe a robot is going to take a billion dollar deal,” but a robot can automate the sales process and administration, allowing relationship managers to deal with dozens of clients at once, he added.

At the end Ward offered up a well-known threat to any industry now dealing with various stages of digital transformation. The big threat from ‘outside’. “If you guys don’t play hard – Google, Amazon, Microsoft will.”