Most of the debate associated to port-call coordination and optimization is related to container transports. As the nature of non-container port-calls differs, the characteristics of non-container segments need to be understood. The tanker industry largely offers a tramp service (like a taxi) with fixed, semi-fixed or unfixed routes without a pre-fixed timetable like in a liner service (like a bus).

This means unknown or unpredictable port visits until a freight contract is made by traders who decide load date and destinations depending on factors like oil prices. Due to fluctuations in prices and availability, there are often last-day changes of schedule which put pressure for port-call actors and resources to respond on time and create financial & environmental benefits to all involved.

With the boom of digital intelligence applications worldwide, there is a growing awareness, emphasis and pressure for collaboration and data-sharing to cut inefficiency and wastage. While the container industry has achieved much including better ‘berth on arrival’ records – thanks to its liner service nature, pressure is growing quickly for the tanker segment now. Above all, a tanker can spend up to 40% of travel time in port.

For example, among all cargo ships, the tanker segment has the highest share of ship arrivals in Singapore with over 45 tank terminals and almost 200 berths among them. As world’s largest bunker hub, many of these ships arrive in Singapore to re-fuel. While this contributes to the economy, it adds to the dynamic resource allocation problems in the port network, with an increasingly limited anchorage space.

The absence of a ‘port line-up’ system, usual in some other high frequency ports, also reduces the ability for terminals and carriers to increase efficiency and customer satisfaction. Instead, the terminals, berths and carriers work in silo without near time sharing of their schedule-changing data, and often result in chain-effect delays arising from resource re-assignment affecting ports such as Singapore. Relying on mainly manual systems especially for the more dynamic operations like berth scheduling and record-keeping, resulting in missing and erroneous data and lack of standards are also a growing concern for the terminals and carriers. 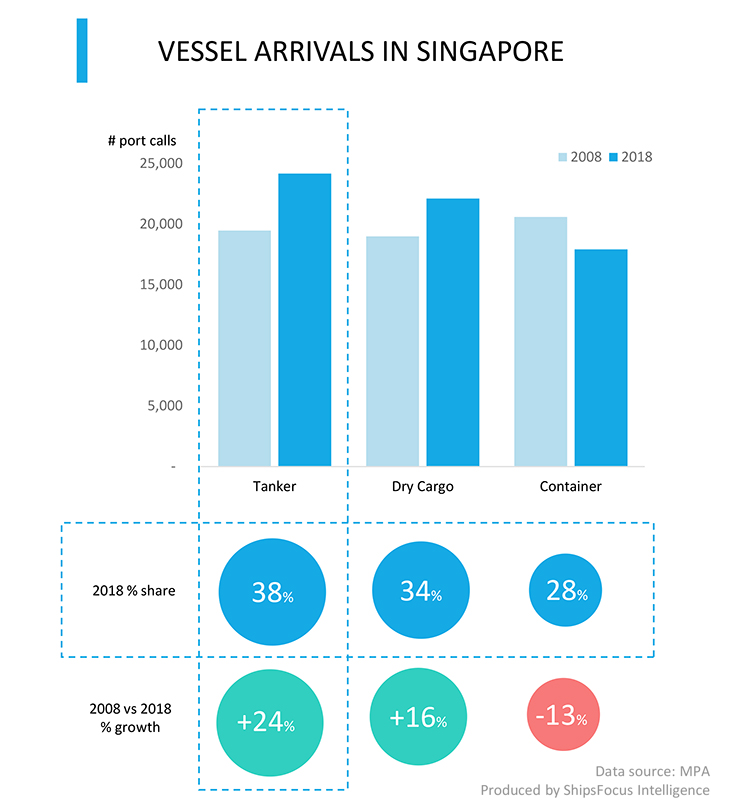 By using the principles associated with the Port Collaborative Decision Making (PortCDM) concept, port-call actors may establish a common situational awareness for the planning and progress of a port-call. This means that each of them knows about the port-call timing and changes at the earliest planning opportunity including plans of others that may, in turn affect their own plans and activities. The end result is a much better coordinated, synchronized and optimized port-call.

The PortCDM concept has been validated in nine ports as part of the EU sponsored Sea Traffic Management (STM) validation project, is governed by the International PortCDM Council (IPCDMC) and is now being implemented by a growing number of ports and port actors. Such validation demonstrated the benefits of providing port-call actors with the ability to share non-competitive scheduling and progress data and the value of data-sharing as substantially greater than any possible downside or cost of sharing the data.

The international time-stamp data-sharing standard S-211, managed by the IPCDMC  and adopted by the International Association of Maritime Aids to Navigation and Lighthouse Authorities (IALA) has been developed to enable the digital sharing of relevant data in a port-call process.

The time-stamp data-sharing standard aims at enabling actors to share business critical but not business sensitive data, the possible gains coming out of collaboration and data sharing are substantial.

Here are some timestamp data examples:

The PortCDM concept is enabling forward looking estimates of port-call time-stamps as well as actual times. It also enables and supports not only the implementation in individual ports, but also the port-to-port collaboration for even better overall results for the maritime transport eco system.

Tools, like the decision-support PORTVIEW, based on AIS provides access to data of ships, their positions, waiting times, and stay times in port to its users, is expected to enhance usefulness, predictability and accuracy of the shared data. With more collaborative efforts like ShipsFocus & Institute of High Performance Computing of A*Star machine-learning forecast, benefits increase as more useful data becomes available through tools building upon the principles of PortCDM.

Tank-terminal operators and carriers in Singapore do not yet make full use of their data and are largely reluctant to share their data. However, it has been acknowledged in the just-in-time pursuit by MPA Singapore that collaboration and data-sharing is key to transform the sub optimization from such a self-organized port ecosystem.

Standardizing data and enabling data sharing between key port actors is a basic key step. This will enable mutually and multilaterally dependent near-time coordination by the network actors. Besides contributing to enhanced capabilities of collaboration and coordination, the PortCDM concept aims to have applications like PORTVIEW glue the different actors in the self-organized port ecosystem together for the purpose of enhanced safety, efficiency, and environmental sustainability.

While there are many challenges for the tanker segment, with collaborative data-sharing and optimally using digital intelligence to lubricate beneficial sharing among actors, we will have much to achieve.

This article was originally published by Port Technology, and is republished with permission of the author.

Mikael Lind joins a distinguished speaker panel at Shipping2030 Asia (Part of Shipping Transformation Asia). Join us to hear from the industry leaders and change makers pioneering change in the shipping industry.