Fundraising in a competitive private market: here's how 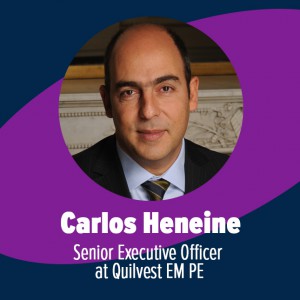 A more pertinent subject for this debate is probably “Fund raising from a less than ideal position,” said Carlos Heneine, Senior Executive Officer at Quilvest EM PE. Read on to find out what fundraisers, whether newcomers with little experience or old-timers with plenty under their belt, should know when fundraising in the private equity market.

For a GP with a stellar track record and a team that has stuck together over a long period, investing in a stable market, it does not matter how “competitive” the environment is. The fund will get raised in a very short period of time. Hence, trying to qualify for that description would be my advice to you and the content of a very short article.

The challenge is less the environment than the particular circumstances of each GP. You will face difficulties if you are raising a first-time fund or later vintages with a chequered history. What is to be done if you find yourself in such a situation?

LPs are less and less willing to take a blind pool risk unless they are signing up to a “Pop Star” GP that they fear to miss out on.

For those striking out on their first endeavour, be they a freshly constituted team or the slightly more comforting spin-off team from an established GP, the most obvious advice is try to have assets in the ground before you go to market. I know it sounds like a catch 22 because it takes money from a first close to be able to invest in assets. Fair enough, but guess what: LPs are less and less willing to take a blind pool risk unless they are signing up to a “Pop Star” GP that they fear to miss out on because it is likely to do a “first and final” close.

How do you square that particular circle?

There are a number of ways along a spectrum, which ends at one extreme with becoming a captive team to an institution with money but no resources. Short of that probably undesirable outcome, there are ways to negotiate terms with pools of money looking at being more than passive investors. You could agree economic concessions, a share of carry over the whole fund or even a piece of equity in the GP itself. In exchange, you will be allowed to make investments using the fire power of that anchor investor, which will form your “visible assets” for a close.

A less constraining option would entail offering co-investment priority to early committers and to make this even more concrete, you could propose the lion’s share of the first one or two deals with a promise to flip the balance into the fund at its first close. That is commonly described as a “warehousing facility”. Armed with these visible assets and potentially a first close of substance, you will then be in a far better position to continue your standard fund raising amongst more traditional pools of money.

The most appropriate approach is to be fully transparent about what happened to each individual investment.

It’s ironic, but it’s often better to be a first-time GP with a clean slate, perhaps with personal track records at other funds, than an established team with poor performance. Pitching a bright future to a sceptical audience is easier when they having nothing to go on rather than when you have to explain away a difficult history. Explained away it can often be, though. The most appropriate approach is to be fully transparent about what happened to each individual investment. Slice and dice the performance to show how each metric evolved over time. Identify the drivers of revenue, margin and EBIDTA for each firm and explain how and why they behaved as they did. Decompose performance to show the impact of currency, of multiple compression or expansion, the impact of leverage as well as the basic financials of the company. If you can show that you understand exactly what happened, what your contribution to that behaviour was and the lessons you learned and possibly applied along the way, you should have a receptive audience.

All that I suggested above to convince an active investor to back a first-time team applies equally well to an established one. However, before you go down that path try engaging your historic, albeit unhappy investors. They should certainly be willing to hear what happened to their money over the past few years. Don’t wait till the last minute to do so and if you do a good job at transparency and explaining cause and effect, to say nothing of showing contrition and humility, they might very well be ready to give you another chance.

A possible “final” string in your bow, and one that should be used in all circumstances and from the start of your process, is to seek the support of the DFIs. It’s their mission to put GPs in business. A team with a history, even a difficult one, that is cohesive, honest, hardworking and has shown an ability to source and execute transactions, is a rare commodity in many countries where DFIs are trying to help develop the PE ecosystem. Surely it is as important to the DFIs to keep them in business.

What if none of these strategies had worked?

If none of the above works because investors are behaving like a doubting Thomas, then you might want to consider “mortgaging” your next few of deals by offering most of the upside to your financiers with one objective in mind: building – or rebuilding - a track record.

If you can access good deals, which is the initial premise for your ambition to raise a fund, then you will find money for them. It might not be on terms that you like or with the ideal source of funding, but as long as it allows you to run your shop and keep the lights on, take the money. I have seen too many promising teams holding out for the perfect outcome and finally breaking up. Not all members of a team have similar risk reward profiles or timelines. Staying together by all means necessary and putting money to work is the name of the game. Eventually the cycle will turn, money might become less hard to come by but most of all you will hopefully have the stellar track record I was referring to in my introduction. In a competitive environment, live on to fight another day.