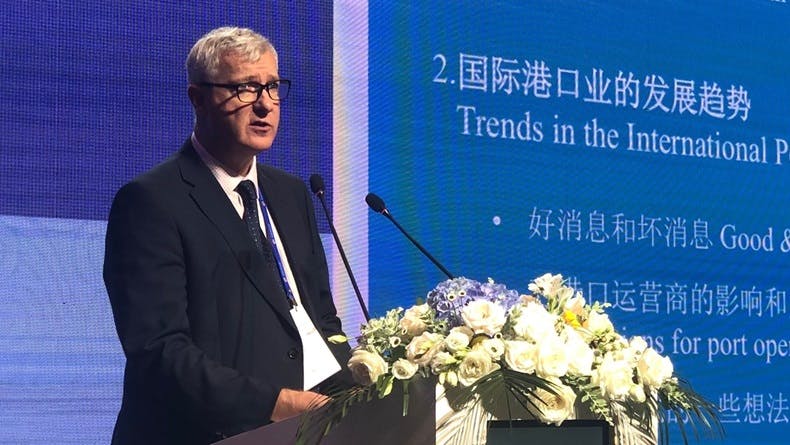 Various equipment and IT systems that constitute the automated terminals are unable to exchange information in a meaningful and efficient way, as they are provided by different suppliers using their own technical standards.

A lack of standardisation is impeding the automation progress at container terminals, according to APM Terminals Asia chief executive Tim Smith.

He argues that while the application is deemed as one of the most important solutions to box ports' slowing growth, it was also a complicated business that needs more common standards to achieve the expected benefits.

"If you want to deliver full automation in a large container terminal, it's actually a hugely complex challenge," Mr Smith told the 2019 China Maritime Forum in Ningbo.

There are only a handful of fully automated box terminals today in the world, including Netherlands' Maasvlakte II facility operated by APMT.

As a result, a substantial amount of big automation projects has so far sustained relatively poor financial outcomes, inconsistent performance and also quite often lots of time overruns.

One of the main reasons behind such disappointing results is the insufficient standards shared between different equipment and systems that constitute the automated terminals.

Many equipment and information technologies supplied to the port industry were customised or focused on solutions to individual terminals, said Mr Smith.

That is because suppliers often prefer to promote their own products using their own technical standards rather than working toward industry-wise solutions.

"There is a very wide variety of operating systems and equipment all working on a different system logistic, none of which talk to each other."

"There is a very wide variety of operating systems and equipment all working on a different system logistic, none of which talk to each other," he said. "As port operators, I don't think we push hard enough to try to get standard solutions."

A number of major carriers have already been gathered around the so called Digital Container Shipping Association, which aims to enable digital standardisation in the box shipping industry. APMT's parent Maersk, which controls the world largest containership fleet, is one of the founding members.

The organisation has yet to recruit terminal operators, but said it would be open to more players along the logistics chain in future.

At the current stage, Mr Smith said port and terminal operators could perhaps collaborate with industry associations, such as the International Association of Ports and Harbors, to increase standardisation in the sector "as an essential first step to achieve more efficient and reliable automation".

ATMT has had already started the initiative to standarise its own operations across a networks of 78 terminals globally.

But more joint efforts would enable the overall port industry to "move much more quickly to operational safety and efficiency improvement that automation offers to all of us." he added.