Live from FEI EMEA: Why should you consider a separate Research team? 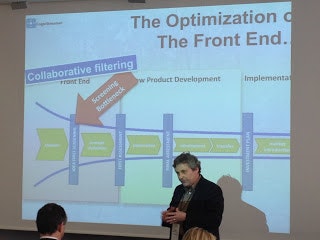 Alfred Yoakim, Head of Nestl' System Technology
Centre, addressed
in his presentation the Nespresso Story. At the beginning Nestl' had a great
product, but they had no clue about the coffee machines. In 1986 a new group was set up as an independent group - with freedom
to innovate in the traditional areas.

The
original team was working from 1986-1993, e.g. developing the Nespresso original
machines and system, filling the pipeline and developing new capsule generation.
The team has been replaced in 1993 until
1998, mainly focusing on quality
improvement and production aspects. The
original team was called back in to stimulate innovation.

In the
following years several different coffee machine types have been launched.
Several proposals for new launches were originally not supported by the Top
Management, which were very successful after launch, several times under a new
management.

The total
team didn't have even 10 members and worked as a mix from different disciplines
and age. They developed more than 300 concepts and 5000 patents over time.

The common
process went in a loop from Idea Generation to Prototyping further to Concept
Testing, closing again the loop for new Idea Generation.  After the concept tests the step of getting Marketing
& Commercial buy-in towards industrialization always needs to be passed.

Guiding
principles of the team included the realization of quick wins; Innovations
doesn't necessarily mean Invention or complex technology which helps to speed
up. But also putting the consumer into the center and acting with defined
End-Dates, making sure to have a leadership vision and a common sense. But also beware
of short term imperatives and going for renovation
instead of Innovation.

In2011 the
organizational change was made to transfer the team from a hidden group within
Nespresso to a recognized force within Nestl'.

Alfred
Yoakim closed his presentation by providing success factors based on his lessons
learned:
Make sure that the team works stand-alone and protected, is empowered and
funded, is free to innovate and explore and has Champions in addition to
Management support.

Frauke Lohr is running her own consulting business named Comsciencia, targeting customers from industry, academia as well as politics with special focus on innovation topics. She is currently attending the 6th annual Front End of Innovation EMEA in Z'rich, Switzerland on February 27-29, 2012, and covering the event live via the FEI Blog and Twitter.