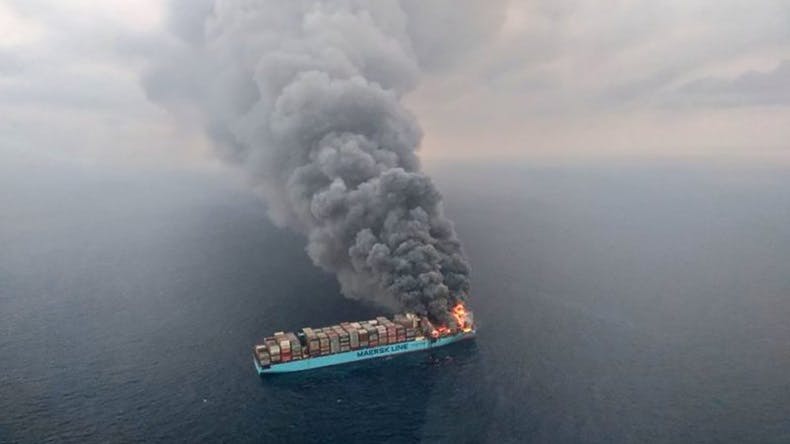 Maersk Line has issued new guidelines for the stowage of dangerous cargo to improve safety measures across its 750-strong fleet of vessels in the wake of the Maersk Honam disaster.

In March this year, a fire on board the Maersk Honam cost the lives of five crew members and was found to have originated from the cargo hold where dangerous goods were stored. This prompted Maersk to carry out an urgent review of its safety practices and policies in the stowage of dangerous cargo.

Under the new guidelines, cargo covered under the International Maritime Dangerous Goods Code will no longer be allowed to be stowed next to the accommodation block or main propulsion plant, areas determined to have the lowest risk tolerance.

This follows the decision by Maersk Line to temporarily prohibit the stowing dangerous cargo close to ship accommodation and engine casing shortly after the Maersk Honam disaster until a cause was established.

The guidelines, called ‘Risk Based Dangerous Goods Stowage’, were developed following the evaluation of 3,000 United Nations hazardous materials classifications to better understand and improve dangerous cargo stowage on board container vessels, according to the Danish line.

In conjunction with the American Bureau of Shipping, Maersk also said it led a workshop alongside other industry stakeholders to conduct a hazard identification study to validate the new guidelines.

The Risk Based Dangerous Goods Stowage principles have also been presented to the International Maritime Organization and the Danish Maritime Authorities, according to Maersk.

“All cargo aboard Maersk Honam was accepted as per the requirements of the International Maritime Dangerous Goods Code and stowed on board the vessel accordingly,” said Maersk’s head of fleet technology Ole Graa Jakobsen, in a circular announcing the implementation of the guidelines. “Despite this, as the fire originated in a cargo hold in front of the accommodation, which held several containers with dangerous goods, it had an unbearably tragic outcome.

“This clearly showed us that the international regulations and practices with regards to dangerous goods stowage needs to be reviewed to optimally protect crew, cargo, environment and vessels.”

Maersk said that it will continue to review its rules and policies for accepting dangerous goods and assess how to further improve them.

This article was originally published on Lloyd's List, 26 Sept 2018.