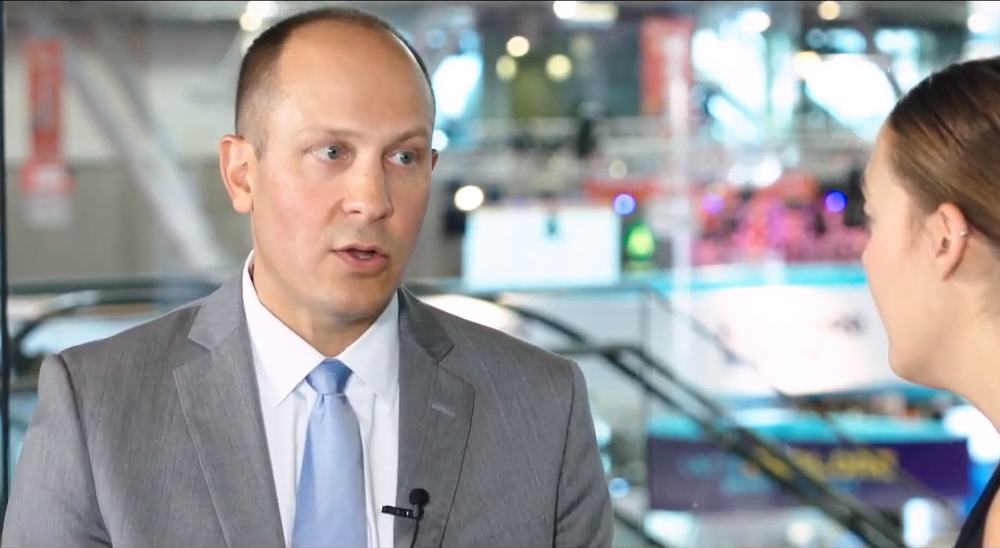 At Biotech Week Boston this year, BWB TV correspondent Sarah Lintern caught up with Chris Gemmiti, VP of Operations at Sentien Biotech to discover his view on the future of mesenchymal stem cells, the biggest hurdles in drug delivery and deciding whether to outsource or insource development.

SL: Sentien is developing allo MSC products. Can you tell us a little bit more about that?

CG: Sure. We at Sentien are developing allogeneic MSCs for a broad range of severe systemic inflammatory conditions such as acute kidney injury (AKI). Unlike some other approaches that deliver allogeneic MSCs intravenously and bring those cells to the blood, we actually load our cells into a hollow-fiber dialysis-like device, so our cells sit on the outside of these hollow fibers and the patient’s blood profuses through the inside of these hollow fibers. So in this way they remain shielded from the immune system, they remain encapsulated in this device but they can still send and respond to the patient’s own blood. So instead of bringing the cells to blood we bring the blood to the cells.

SL: At the moment the whole industry is exploding around CAR-T, but where do you see the future of MSC going?

CG: MSCs have taken some time to really get their feet underneath them as relates to the clinical mechanism of action. We have a much better understanding of that now, which has actually allowed the manufacturing and many of the operations to catch up. So I think that MSCs are really poised to reach their clinical and commercial potential and MSCs have a very complex mechanism of action and as such they can treat a very complex disease state such as AKI, which is where Sentien is.

SL: In terms of working with MSCs, what would you say are the main advantages and disadvantages?

CG: The main advantage of using MSCs is their broad mechanism of action. They secrete a wide range of cytokines, growth factors, EVs, and they’re dynamically sensing. So that’s probably their greatest strength, but, at the same time, could potentially be their greatest weakness as well. There’s a lot of characterization to do, complex analytical techniques, but even past that, they’re well characterized clinically; they’ve been shown to scale commercially and generally shown to be safe, so I think they’re really poised to really deliver on their commercial and clinical promise.

SL: You sat on our CDMO panel looking at insourcing vs outsourcing. What did you think were the key takeaways from that panel?

CG: At the end of the day, whether you are outsourcing your development or keeping it in house, you have to be the expert in your process. Your team has to really understand the critical process parameters, the critical quality attributes. That depth of understanding is really the foundation [on] which you can build. So when you have that knowledge, you can bring things in and keep it [for] yourself - and I think that’s the greatest amount of control that you can have - or you can outsource it to a CMO, and I think especially with the early-stage companies, outsourcing makes a lot of sense. You take advantage of everything that a great CMO offers you: infrastructure, analytics, quality systems and, most importantly, skilled people.

SL: You've been in the industry for 20 years which, for those people working in cell and gene therapy, is actually quite a long career in a space that hasn’t been around for very long. With your experience in the industry, what would you say have been the top 3 milestones to date?

CG: Certainly, I think there’s a lot in the eighties and nineties in terms of scientific breakthroughs, and what I think is actually even a negative milestone is the dot com bubble-bursting in the early 2000s. I think a lot of those early tissue engineering regenerative medicine companies were more like research institutes than real businesses, and so I think through ‘survival-of-the-fittest’, we really reoriented ourselves to push these forward as a business and make sure they’re commercially viable - so that’s a big one. The second is probably the 21st Century Cures Act. Not only did that establish the RMAT designation, but also put forward a lot of money for the FDA to resource a lot of technologies coming through. And I think the third, generally speaking, are the CAR-T and gene therapy approvals, whether it’s Yescarta or Kymriah. That can show that we can have truly transformative therapies that have a significant difference over standard of care and can be scalable and very attractive in which to invest, but also be commercially viable as well. 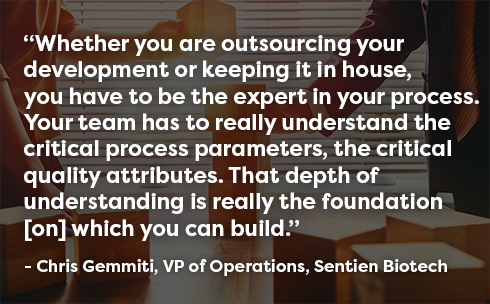 SL: What would you say are the biggest hurdles when it comes to getting a new drug, like Yescarta, to the patients?

CG: Ultimately, it has to work. It has to work scientifically and clinically. And I know that sounds simple, but I think for a long time in cell therapy, we have products that work maybe incrementally better than standard of care. These are really transformative - and gene therapies as well - that may even be curative. So once you can establish that - and that really comes from a deep understanding of the science and how these things work clinically - if you can do that, then the process may take some time, the approval may take some time, but I think ultimately we will get there. And we’re seeing now that there are still challenges of patient access and reimbursement, and those are real, but we are still early days with these transformative therapies and I’m confident we will get there.

SL: And I guess that’s why these things like outsourcing, cost of goods, and critical quality attributes will drive down what could be potentially the cost of the medicine, to then make it more accessible to patients.

CG: Absolutely. And certainly patient access and being able to deliver these to patients, payers, hospitals - that makes sense across the entire spectrum - is really key and something we’re seeing evolve in front of us right now.

SL: We’re in Boston, which is a huge biotech hub. It’s amazing for new science, especially cell and gene therapy, and you’re Massachusetts-based too. What do you think it is about Boston that makes it such a cool, exciting place with regards to science?

CG: Yeah, it really is amazing. I think you can point to this convergence of some of the key pillars of innovation: we have some of the top universities in the world that are producing smart people that want to stay here and continue to innovate; we have some of the top hospitals that are doing not only their own research but clinical research as well; you have investment groups that are VCs but also strategic partners, as well as the companies themselves. You bring all of that together - as well the state, the government has done a lot in terms of incentive and overall support - and you have a really amazing ecosystem.

RELATED ARTICLE: What can reduce the cost of CAR-T therapy? - INDUSTRY VOICES