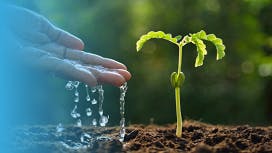 Nanobubble technology is rapidly emerging as a next-generation tool for precision agriculture. Generating significant market value in other industry sectors, its use in agriculture delivers new possibilities for improved fertilizer performance, resulting in greater profitability and sustainability.

Nanobubbles are tiny bubbles, invisible to the naked eye and 2,500 times smaller than a single grain of table salt. Bubbles at this scale remain suspended in water for long periods, enabling highly efficient oxygen transfer and supersaturation of dissolved gas in liquids.

California-based Moleaer owns technology that injects oxygen nanobubbles into irrigation water to deliver efficiency in oxygen transfer: more oxygen near the root zone increases nutrient absorption and plant resistance to environmental stress.
“An oxygen-enriched root zone improves root mass, increases uptake of key nutrients like calcium and potassium, and helps suppress pathogenic growth,” notes Nick Dyner, Moleaer CEO. "The technology also reduces biofilm, source water algae and pathogens such as Pythium and Phytophthora to optimize plant health and growth.”
Moleaer’s technology involves patented nanobubble generators that were designed and built using the company’s engineering team’s experience with agricultural applications. Dyner says they’re easy to integrate, install and maintain, without the need to overhaul an irrigation system.
“We’ve developed our solutions hand in hand with innovative farmers and horticulturalists around the world, from California to South America, to the Netherlands, and have proven their efficacy on everything from avocados to tomatoes,” says Dyner.
Recently, a southern U.S. company decided to try nanobubbles in its fertilizer products, with great success. RainAG partnered with Moleaer to market new nanobubble-infused fertilizers combining Moleaer’s nanobubble technology with RainAG’s patent-pending Rain Technology. The new RainAG nanobubble-infused fertilizers have been trialed and utilized across a range of commodity crops including corn, cotton, wheat and sugarcane, fruit and vegetable crops, and on turf and silviculture.
Tim Ford, RainAG general manager and part owner, notes that Rain Technology offers a revolutionary step change and disruptive economic benefit for growers.
“We know that plants need oxygen in the soil profile, so one of our founders initiated in-house research using the [Moleaer] units to nanobubble the fertilizer solutions and then make the applications – that’s where it all started,” he says. “We see benefit not just from a soil-applied or an injection via irrigation, but even from a foliar applied benefit with the nanobubbles.”
Ford says the nanobubble enhanced RainAG fertilizers have significant benefits, including increased crop yields by up to 16 percent in corn and 12 percent in cotton; increased crop profitability by more than $5,100 per acre of tomatoes; increased crop marketability by more than 110 percent in strawberries; reduction in fertilizer utilization; and reduction in off-target nutrient runoff and groundwater leaching.
“We see that across the board,” notes Ford. “We have data on tomatoes where we had a 30 percent increase in yield; we’ve seen 12 percent increase in cotton lint where nanobubbling is used alone; in carrots we had an 18 percent increase in number ones which is the most marketable carrot, and a 20 percent reduction in off-grade carrots. We’ve seen it on all the crops we’ve tested so far, and we’ve tested quite a few.”
RainAG has expanded its testing to seed treatments, “and we’ve seen benefit with that,” says Ford. “We also now have some new exciting revelations around treating dry fertilizer, where we’re sparging the nanobubble liquid onto dry fertilizer, and we’re seeing an increased benefit of adding that to the fertilizer.
“We also have some ongoing studies in that realm to determine how much fertilizer could the grower potentially reduce and not impact the yield. Because we do increase the yield when we sparge the dry as well.”
Ford adds that when combining Moleaer’s nanobubble technology with RainAG fertilizers, farmers are able to reduce operational costs, reduce risks from crop loss, and reduce the environmental impacts to local water sources from increased phosphorus and nitrogen levels.
Moleaer has deployed more than 1,000 nanobubble generators worldwide since 2016 for use in various industries. Using one of these generators, RainAG takes fertilizer from one tank, pumps it through the Moleaer unit, and then pumps the resulting nanobubble solution into another tank where it can stay for a significant period of time.
According to Ford, dry fertilizers treated with RainAG liquid nanobubble technology has a fast-drying process that eliminates issues such as clumping. Rain Technology allows farmers to readily store their dry fertilizer up to the time of blending – and go to the field without any worries.
“Applying nanobubble technology to liquid fertilizer provides an extended shelf life – which gives growers more flexibility in application timing,” he notes. “We’ve tested it out to 16 months and these nanobubbles will attach and stay involved in the solution for up to a year. We’ve tested product outside of a year and still had above the limit of what we looked for as far as dissolved oxygen.”
RainAG has established their nanobubble-infused fertilizer sales in seven U.S. states to date, and they continue with ongoing testing.
“We have trials set up in many parts of the U.S. with additional testing planned in winter vegetable growing areas later this year,” says Ford, adding that moving forward, RainAG looks to expand its footprint across more crop sectors in the U.S., plus Canada and other international markets.
“There are no barriers with regard to product labelling or anything like that; this is a mechanical application to the fertilizer, so the technology actually elevates the overall performance of the fertilizer, making it better and of greater value to the grower.”
By Janet Kanters, NAI Editor
(This story was first published in the Sept-Oct 2021 issue of New AG International. To read and subscribe, click here.)