Outlook for 2019 from a private equity point of view For the second consecutive year, S&P Global Market Intelligence conducted a survey among PE professionals(1) to gauge industry expectations for the upcoming 12 months. Questions were aimed at understanding the sentiment of junior and senior professionals across sectors, strategies, exits, and risks in the industry. Collectively, analysis of the results helps us frame the global level of optimism and what we can expect from PE firms in 2019.

The past year has been eventful, and many of the predictions indicated by surveyed professionals in 2017 did not come to fruition. As we step into a new year, some expected predictions were validated, while new developments may steer the industry in a different direction, notably around sentiment and strategies employed by investors. Transaction data from S&P Global Market Intelligence adds further support to many of the trends observed across the global group of professionals surveyed for 2019 outlook.

By 2018, investors enjoyed the longest bull market in history, as widely expected by 2017 surveyed professionals. Fast-forward to a Q4 2018 correction, and we quickly see eroding confidence with only 44% of respondents indicating an expectation of improving PE activity in 2019. Compared to a bullish 59% in 2017, sentiment has certainly plateaued. More surprisingly, 14% of respondents expect a deterioration in activity, a mindset only 1% of 2017’s survey participants indicated (Figure 1). 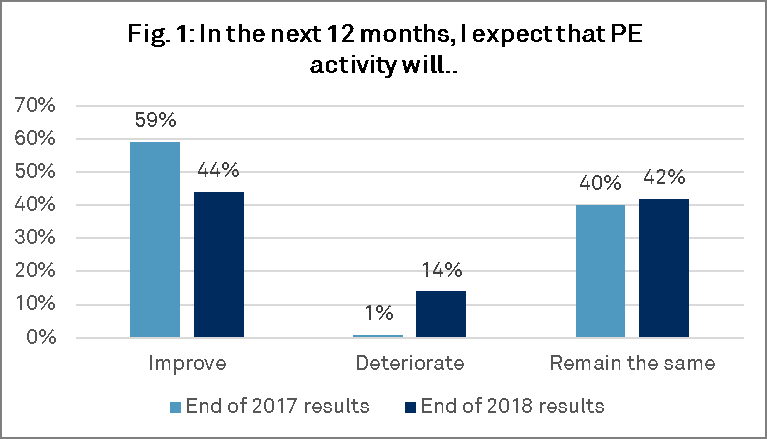 While industry issues, such as dry powder and a lack of buying opportunities, have been widely publicized, factors tied to local economies heavily influence the sentiment from respondents. According to Paul F. Gruenwald, Global Chief Economist at S&P Global, the outlook for the global economy in 2019 is straightforward: GDP growth will slow in aggregate and in most major countries, with the U.S. likely to see the rate of expansion fall to around 2%. At the same time, Chinese growth will be moderate and Europe’s growth will remain relatively low and stable(2).

In light of this, EU PE professionals are the most optimistic of the bunch, with a comforting 93% expecting conditions to stay the same or improve. In contrast, from the aggregate perspective, respondents in APAC, North America, and LatAm expect deterioration of 44%, 17%, and 13%, respectively, for investing conditions (Figure 2). Brazil was a notable exception, with all Brazilian respondents forecasting a better year for the PE industry in 2019. Interestingly, the senior professionals surveyed indicated a higher level of pessimism for 2019 investing, a trend that could have a profound impact on deal value and volume for the year. 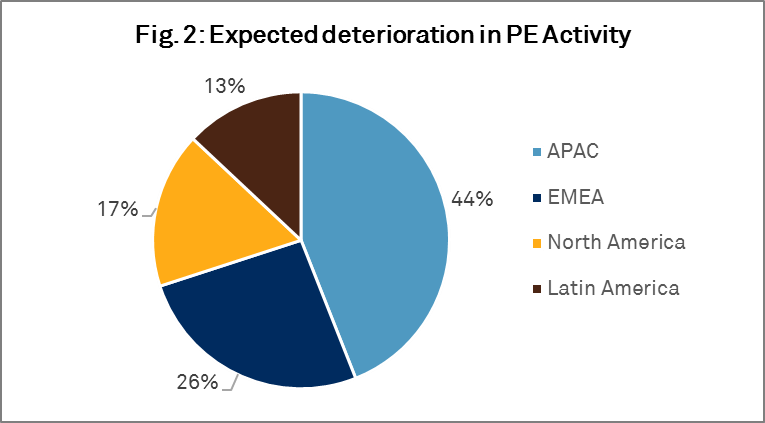 When it comes to identifying risks, unsurprisingly, issues related to sanctions, tariffs, and protectionism rose substantially: up to 28% of respondents in contrast to 16% the previous year. More broadly, 71.5% of global respondents indicated the economic environment as the largest risk for the second year in a row. Political upheaval fell a third from last year to 39% of respondents, and technological change, evidently overshadowed by larger macroeconomic risks, was indicated by only 3% of respondents, a steep decline relative to the 26% indicated a year prior.

Not surprisingly, protectionism concerns are largely isolated to professionals directly exposed to the global trade spat by being located in either China or the U.S. Outside of these countries, this risk is not seen as a major disruptor, and investors feel they are unaffected for the time being (Figure 3). Looking at risks from the aggregate global view, Figure 4 provides the summary of survey respondents’ concerns for 2019. 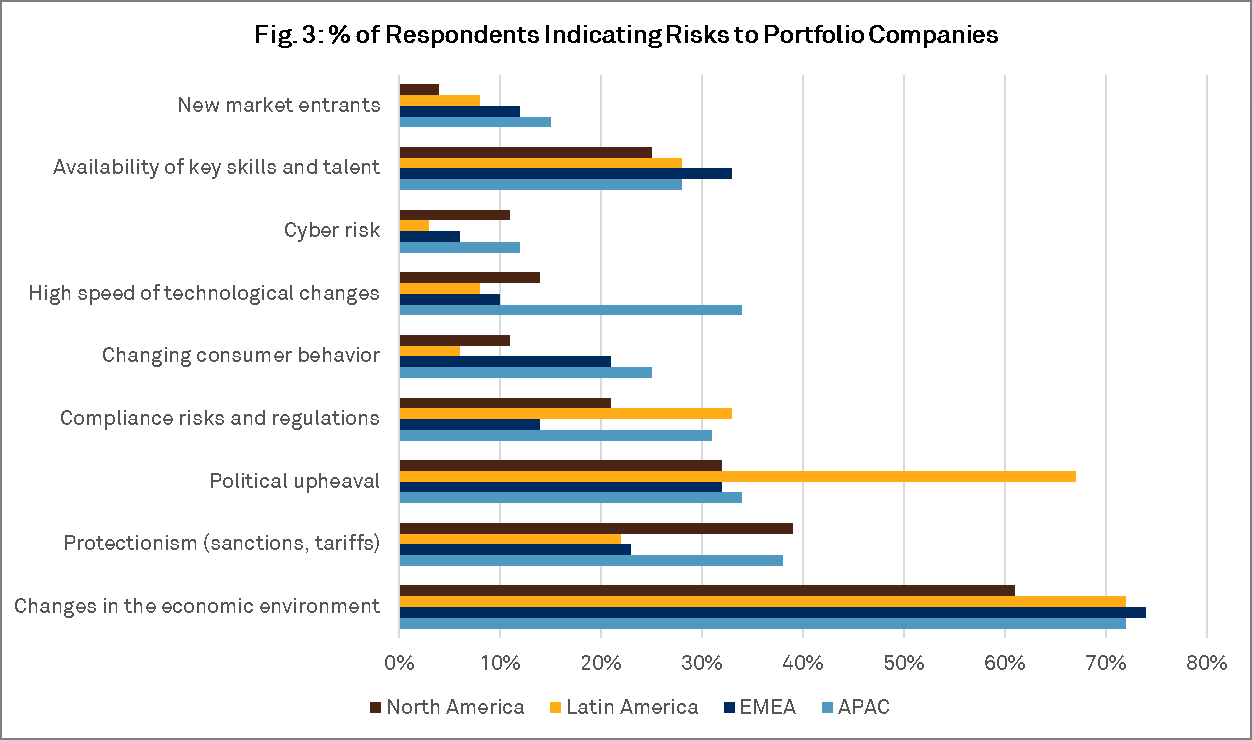 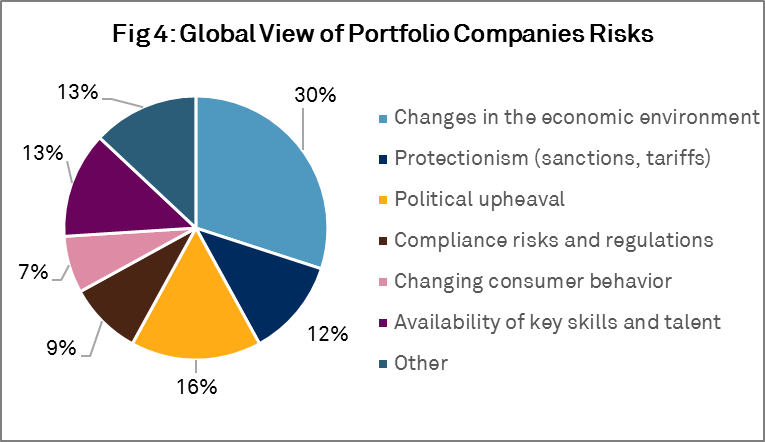 Despite the risk, the show must go on

The strong, double-digit growth of equity markets in recent years has privileged sponsors to monetize growing valuations, shortening investment horizons substantially. Shifting markets have normalized PE’s approach, with 26% focused on harvesting investments and a smaller 7% pledging to be exit-oriented. Fundraising, sourcing new investments, and deploying capital remain the primary drivers and are consistent year-over-year as primary sponsor activities. As for the ability to deploy capital, S&P Market Intelligence data saw a slower 2016 and 2017, where 13,714 and 13,995 transactions were reported. The year of 2018 proved fruitful from a deployment perspective, as total transaction volume surged to 14,765 announced deals (Figure 5). With an appetite for further investing and a record amount of dry powder, we expect GP investors to accelerate deal activity in 2019. 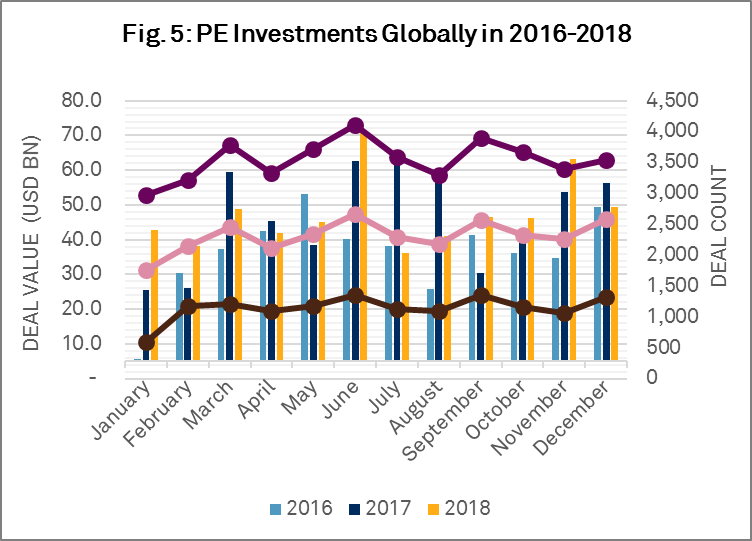 Having a closer look at the investing activities, respondents identified growth equity, buy and build, and add-on investments as the top execution items for 2019. Add-ons, not previously indicated as a core focus, highlights PE’s intent to shift towards platform investing and inorganic growth strategies. Geographically, 25% of EU and 26% of U.S.-based respondents are looking to execute add-ons in 2019. The larger appetite for add-ons is partially due to the changing industry focus, as Healthcare attracts significant interest and has historically been a sector prone to active growth strategies.

Industrials, the second most active sector for buy and build strategies, had an overwhelming concentration within Europe, notably investors located in Italy, the Netherlands, and Spain. From a leverage perspective, the positive equity market conditions translate well to favorable debt markets, with strong demand persisting for high yield debt. However, only 4% of respondents globally are planning to refinance portfolio companies extensively. China is a rare exception, where 78% of respondents expect to recapitalize. This is in contrast to North America, where over 50% of respondents are not prioritizing recapitalizations in 2019.

With an evolving landscape for 2019 investors, a shifting mindset exists between where investors are currently managing investments and the industries in which they indicated having an interest. Healthcare, as previously highlighted, has risen to the forefront as the top sector with 49% of respondents holding portfolio companies in the sector. Respondents in 2017 indicated Industrials as the top sector for seeking investments, an activity that did not come to realization.

There is strong support for firms to remain heavily invested in Healthcare, as an equal number of survey participants, 49%, indicated they would be seeking opportunities in the industry, as well. IT, Industrials, and Consumer Discretionary round out the top four sectors of interest with 41%, 39%, and 33%, of respondents indicating so, respectively (Figure 6). Energy and Real Estate continue to fall out of favor, with firms instead divesting and reducing exposure to these industries. 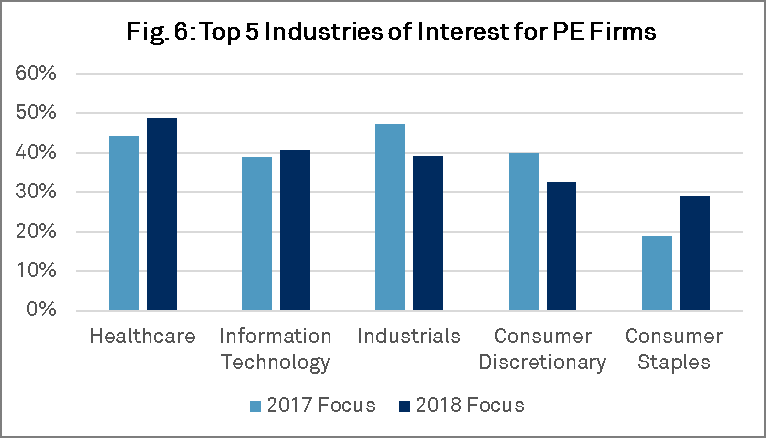 As an emerging trend, Consumer Staples has grown in interest for PE investors relative to 2018. According to S&P Global Market Intelligence data, transaction volume in the sector stood at 588, 655, and 669 deals in 2016, 2017, and 2018, respectively. Alongside Healthcare, there is an apparent interest from PE investors into defensive industries. Whether this is driven by market sentiment or other factors, the attention to secular industries is an apparent trend to be observed in the coming year.

Total exits recorded by S&P Global Market Intelligence in 2018 stood at 3,387 transactions, a decrease of 22% from the year prior. Predicted exit strategies for 2017 relied heavily on traditional M&A, despite favorable equity markets (Table 1). The benefits of an immediate exit via M&A, alongside other factors, deterred many investors from pursuing IPOs in 2018. Despite the lack of IPOs, respondents indicated a forward-looking preference for this exit route. Brazil and the UK led the group in favoring IPOs for 2019. With uncertainty around the global economy, it is difficult to predict how long capital markets will permit favorable selling conditions as an appealing alternative to an outright sale. 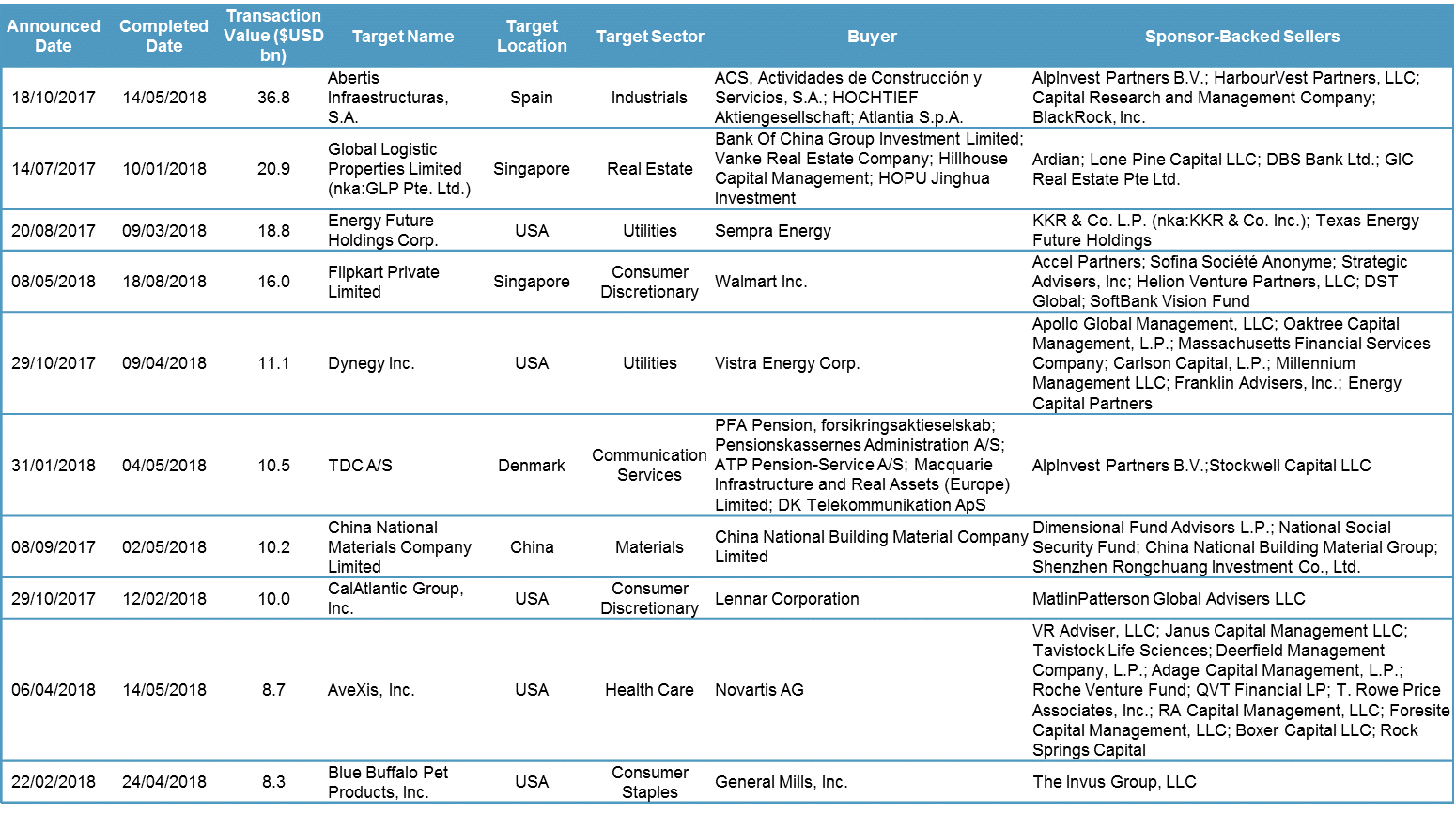 Beyond PE, many firms began to diversify away from core practices in 2018 as interest in other alternative asset classes, most notably private debt, began to arise. The focus has again shifted, this time towards secondaries(3), as liquidation strategies have evolved for PE investments. Although historically more common in the U.S., APAC, and EMEA regions have shown interest in exploring secondaries, as well. It is no secret that the PE industry continues to evolve, and those firms focused exclusively on their core investing approach fell 7% to 43% of all firms surveyed.

At the same time, APAC is the region maintaining its focus on core PE activities, in addition to investing internationally, notably within South East Asia and, not surprisingly, excluding the U.S. Infrastructure is rightfully a focus for developing countries, with 50% of respondents from Brazil looking to make an infrastructure investment in 2019, a trend seen throughout all of LatAm. As highlighted in our Latin American Deal Trends publication, Brazil is the largest and most active country in the region for both local and foreign investment, with local investors focused on infrastructure projects(4).

In contrast to 2017, sentiment has reached an inflection point, where both senior and junior professionals are prepared for a more challenging investment climate in 2019. The risks to overcome are unique to each region, but all tied closely to the impact localized issues have on the global economy. A slowdown may not be worrisome for all investors since valuations are expected to decline, allowing capital to be deployed in a more efficient manner. This includes a drift towards non-secular industries, such as Healthcare and Consumer Staples, and a tilt towards inorganic growth strategies.

Overall, a cloudy backdrop has instilled concern for investors. In lieu of this, the need to pivot strategies and address risks is apparent in how respondents are expected to conduct themselves in 2019. With capital ready to be deployed, we are excited to see how the year evolves and monitor investors’ continued resilience to earn returns above potentially lower yielding asset classes.