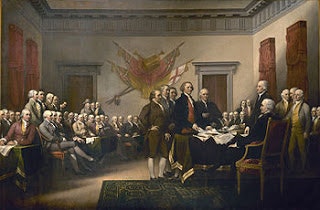 C. Engdahl
The Big E of Big E Toys'We hold these truths to be self-evident, that all men are created equal, that they are endowed by their Creator with certain unalienable Rights, that among these are Life, Liberty, and the pursuit of Happiness.'

The second sentence of the United States Declaration of Independence is likely one of the most recognizable phrases in the English language. It's an unbelievably important idea that is oft repeated. It was thought so important in fact that a revolutionary war was fought over it.

What's particularly interesting to me is the fact that historically wars are most often disputes about land, power, or even revenge. Certainly revolutionary wars are a bit different because they can involve the premise of self-governance. But even revolutionary wars are not inherently based on new ideologies. The American Revolution stands alone as a war about a new, powerful idea.

But social studies class this is not. A discussion concerning the merits or origins of the underlying premise of the Declaration of Independence is not forthcoming. What I would like to highlight is the possible, although improbable, thoughts surrounding the Declaration signing. I was looking recently at John Trumball's 1819 Declaration of Independence painting (the reason why is not exactly clear even to me) and began wondering what some of the Founding Fathers may have been thinking about this new powerful idea. (As an aside - not that this really matters for purposes of this discussion - Trumball's painting actually depicts the presentation of the Declaration to Congress, not the signing itself.) 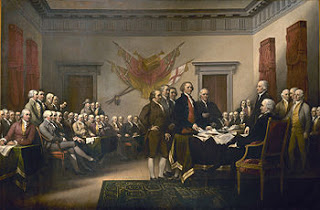 These are all obviously satirical ponderings. I have to believe the Founding Fathers certainly knew the importance of the idea and the stakes at hand. Their lives, literally, depended on the outcome of the revolution. The questions and thoughts fictitiously presented here are meant simply as a metaphor for the different types of questions posed by today's organizations throughout the world when conjuring new ideas.

Front-end struggles are typically fairly complex and rooted in various types of problems. Some organizations, like John Adams, may think they don't generate enough ideas. The Jeffersonians of the world are not certain whether or which ideas are any good. And others like Franklin may have a portfolio full of ideas but are unable to prioritize them effectively. Organizations operating in the spirit of John Hancock or Sam Adams may not be confident in their ability to handle the really great idea or simply don't know what to do with it in the first place.

No matter your situation, I imagine implementing a good idea development system could certainly be to your benefit. I'll not attempt to outline here what a good idea development system looks like. Perhaps another time. But note that I use the term 'idea development' and not simply 'idea generation'. It's my impression that organizations, when they decide to place emphasis on the Front End of Innovation, decide to concentrate primarily on idea generation, when in fact they're likely deficient in more important elements of the process. Generating more ideas in my estimation is the easy part of the front-end process. What organizations truly lack is the means to develop ideas once they're captured. Not only must you generate ideas, but also must you have the methods for discussing, evaluating, prioritizing, communicating, and acting on those ideas.

It's not enough to simply generate ideas.

I wonder whether the United States would even exist if the Founding Fathers simply generated ideas.