Protect your crew and cargo; ensure effective planning, prevention and response to maritime casualties - including search and rescue operations. 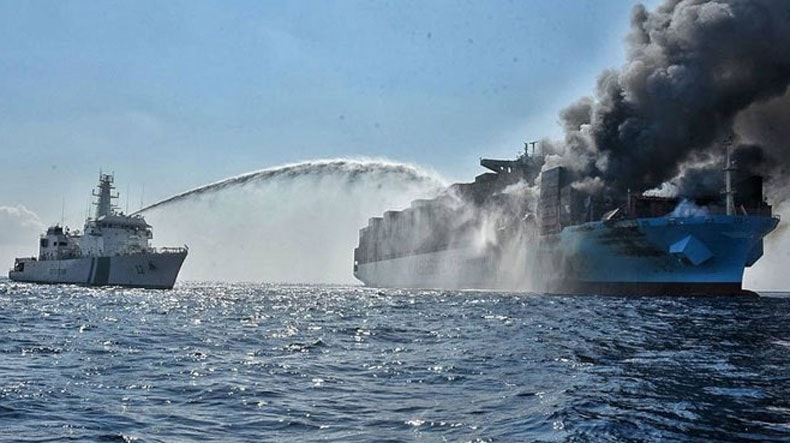 With the incidence of fires on very large containerships on the rise, with about one occurring a month, salvors face huge difficulties due to the vessels' sheer size and the volume and inaccessibility of the cargo. A huge range of skills must be summoned, including dangerous goods specialists, waste experts, chemists and gas technologists.

Salvors face enormous safety concerns in the aftermath of fires on containerships as they rummage in a fearsome cocktail of hazardous debris and they raise serious questions for the industry as boxes are packed ever tighter, goods are misdeclared and architects design vessels with increased teu capacity.

The afternoon of the International Salvage Union Associate Members' Day event in London last month was not for the faint hearted, as attendees learned something of the practical problems following fires on very large container ships.

These are happening at a rate of one per month at present, but the difficulties of the salvors are exacerbated by the sheer size of the ship and the volume and inaccessibility of the cargo.

It took six weeks to extinguish the fires that engulfed the forepart of the Maersk Honan as it was slowly towed through the Indian Ocean towards Fujairah, before being anchored off Jebel Ali port in Dubai for salvage operations. The blaze killed five of the ship's crew, completely gutted the accommodation island and destroyed the entire contents of the forward three holds, above and below decks.

It seemed a miracle that the ferocious heat did not ignite the bunker tanks or burn through the shell plating, but that was almost certainly due to the efforts of the salvage teams.

The pictures shown at the salvage union event by Richard Janssen of Smit Salvage illustrated the destructive power of that fire as it incinerated its way through the cargo, leaving a tangled mass of cell guides, corner posts, twisted metal and vast quantities of ash.

Once the ship was safe, the next phase he described as "excavation", with some 28,000 tonnes of debris to shift, sort and categorise into what could be recycled, what was still hazardous and what was waste.

All sorts of different skills had to be summoned - experts in waste, dangerous goods specialists, chemists and gas technologists, along with the teams that would grab the wreckage out of the holds.

Mr Janssen described the process as "never quite sure what you are finding", with the operation requiring constant analysis, with continuous movement within the chemical composition.

There were serious safety concerns, as they mined into the fearsome cocktail of hazardous debris, with the salvors using safe cabins within the hull, along with decontamination stations.

Occupational health was a major issue. There were, he said "lots of surprises" in a very large operation, with cranes mounted on two jack-up rigs alongside the ship, undertaking the excavation.

There was also "a lot to be learned" from an operation dealing with the aftermath of such a shipping casualty. The logistics were fearsome and complicated by the fact that there was no shore-side storage at Dubai and the "spoil" required a barge transfer to neighbouring Sharjah - and the agreement of both emirates' governments.

To bring any such ship into a port of refuge is a big ask, even though the aftermath might have produced some economic benefit for the region. The sheer mess of such a damaged ship ending up on anyone's doorstep might make any coastal state put up the shutters.

Resolve's Nick Sloane, who led the retrieval of the Costa Concordia cruiseship from its wreck site after it struck a rock off Italy in 2012, spoke about the sheer impossibility of the situation facing the tiny crews of these gigantic ships, when a fire was out of control.

He raised the question of whether even the best prepared professional salvors could cope with the sheer frightfulness of 20,000 teu ablaze, along with up to 20,000 tonnes of bunkers embarked.

He asked the audience to imagine the colossal blast that devastated the Tianjin container yard in China being transferred to a big container ship and showed some terrifying pictures of the wrecked Hanjin Pennsylvania, which saw 40-foot containers blown clean over the bridge after fires and explosion, and the terrible damage to the Hyundai Fortune.

Is there anything that can prevent the spread of container fires, once they catch hold? He suggested enclosing bays of vulnerable hazardous cargo with a sort of "cofferdam" of containers filled with fire-retardant material, providing a sort of fire-break.

Will it happen? It would mean the sacrifice of revenue-earning cargo space, but it surely must be food for thought. It is difficult to think of any other solution, short of banning the shipment of any cargo that might heat, burn or explode.

Actually, getting to grips with a major container fire, said Gert-Jan Langerak of Falck Safety Services, required both experience and good equipment. He didn't mention it, but it also demands a lot of courage among those involved in the mobile first intervention services, who have to get down and dirty in some really horrible places. He spelt out his aims of making the situation safe, containing the fire and eventually extinguishing it, which seems simple, but can take months of hard and hazardous work.

He spoke about the need for careful risk-assessment, the likelihood of smoke and toxic gases, the importance of cooling and containing rather than an instant attack on the centre of the fire. A spray of water, he said, was always better than a deluge.

This was very specialised fire-fighting, far beyond the capabilities of anyone on board a ship, as he showed video of access hatches being cut in hatch covers and even coamings, before the teams chopped their way into smouldering boxes below decks.

He noted that aboard very new ships, containers were squashed up close to each other, making access very difficult. There was, he said, a need to "educate" people about the magnitude of what might face fire-fighters.

Maybe education is the crux of the problem.

If those who mis-declared their hazardous cargo, or provided unsafe stowage were more aware - saw the same pictures as we were shown by the ISU - and the consequences of their action in the resulting deaths and damage, they might learn their lesson.

But isn't it worth thinking, at a time when some clever naval architects are designing ships capable of carrying 25,000 teu, that ship owners, who are the main beneficiaries of super-scaling sea transport, should consider the mess they leave behind them, aboard ships of gigantic size, when things go so badly wrong.

This article originally appeared on Lloyd's List and is reproduced with permission.