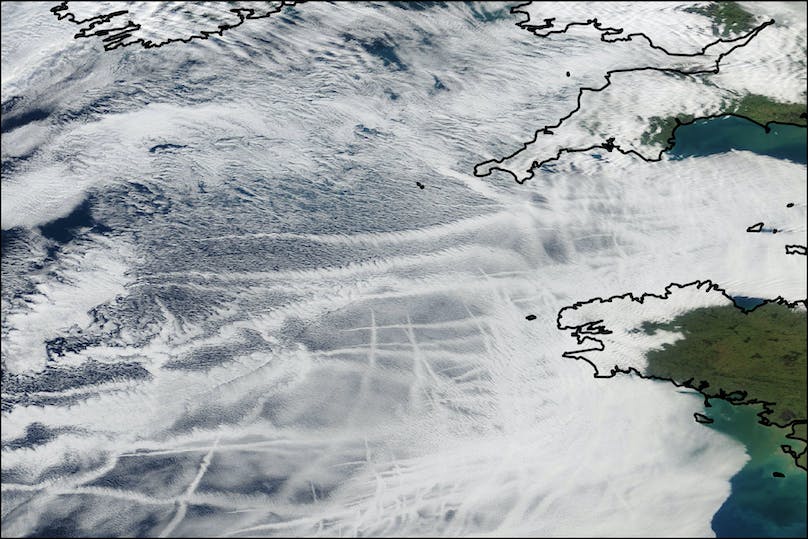 When ships burn fossil fuels, they release airborne particles containing various naturally occurring chemicals, including sulphur. These particles are known to modify certain types of clouds, which can affect climate.

Better knowledge of how these particles, and particularly the sulphur components, affect clouds could help scientists to create more accurate climate models, and shipping’s regulators to potentially monitor the sulphur content in emissions from ships.

In the latest study, satellite tracking was also used to show the impact of restrictions on sulphur in fuels, revealing the impact of ships on clouds largely disappears in ECA zones.

By analysing a huge dataset of ship tracks observed from satellites, we can see that they largely disappear when restrictions are introduced, demonstrating the strong impact of aerosols. - Dr Edward Gryspeerdt

This information can be used to build a relationship between cloud properties and the sulphur content of shipping fuels. Importantly, this could help monitor compliance with sulphur regulations that come into force on 1 January 2020.

An experiment of opportunity

Emissions from ships contain several chemicals, including sulphate aerosols – small particles of sulphur and oxygen. The aerosols can act as ‘seeds’ around which water droplets accumulate, causing changes in cloud properties that are visible to satellites.

This means that ships can change clouds, leaving lines – known as ship tracks – in the clouds behind them as they sail.

However, exactly how these aerosols impact the properties of the clouds is not precisely known. This knowledge is important because the kinds of clouds that the emissions affect can influence climate warming, and is therefore important to capture in climate models.

Aerosols are emitted from many sources, such as factories and cars, but it has been difficult to match these outputs with the influence on clouds, as there are many other factors at play. 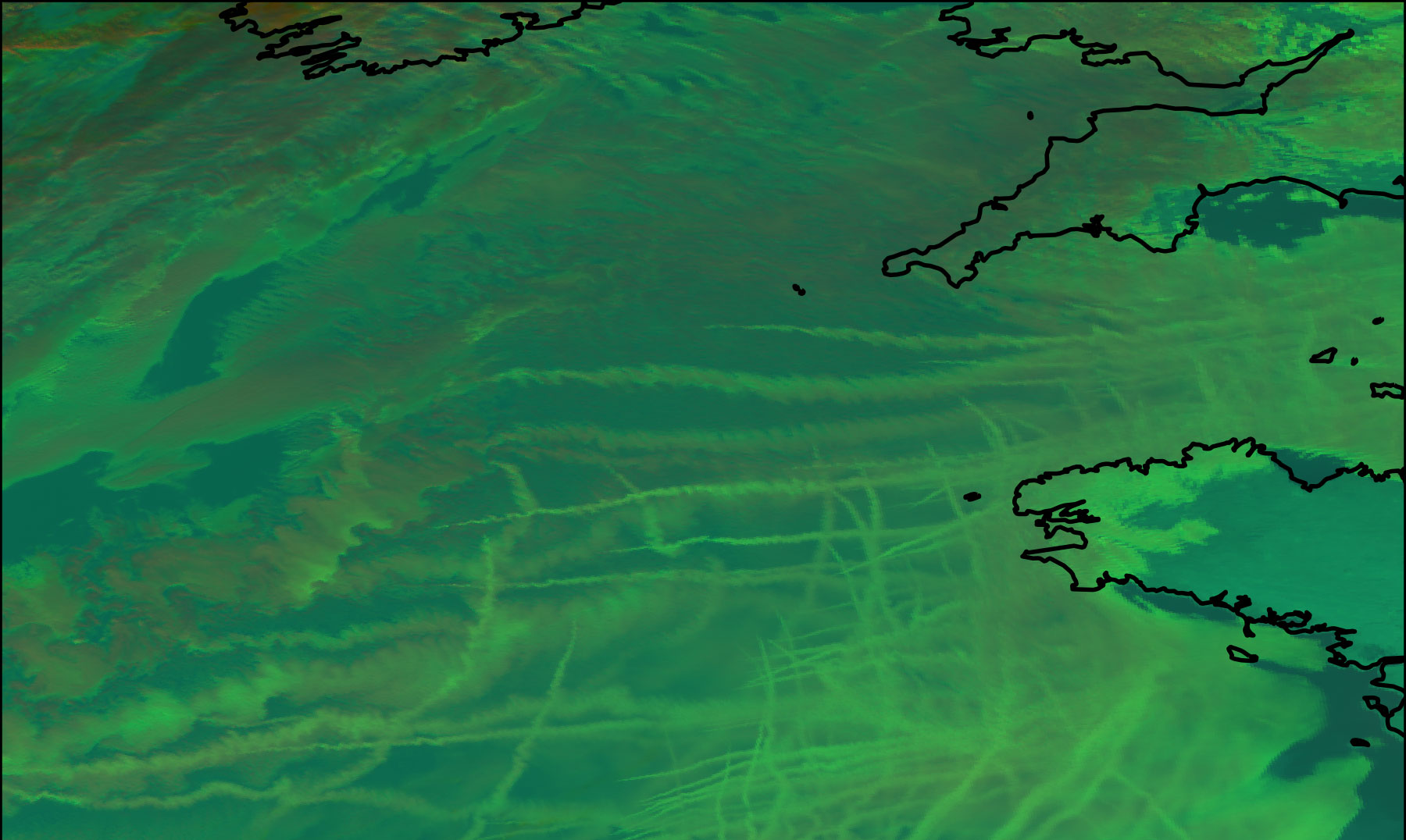 False-colour image of clouds off the coast of Cornwall, using near infra-red frequencies to highlight the presence of ships. Image Credit: Dr Edward Gryspeerdt, with data from NASA.

However, with ship tracks, the relationship is more straightforward, enabling researchers to tease out the links between aerosols and clouds more easily.

Lead researcher Dr Edward Gryspeerdt, from the Department of Physics at Imperial, said: “Ship tracks act like an experiment that would be impossible for us to do otherwise – we cannot inject sulphate aerosols into the atmosphere at such scale to see what happens.

“Instead, restrictions on the amount of ship sulphate emissions can contain provide us with a perfect experiment for determining just how important the aerosols are in cloud formation. By analysing a huge dataset of ship tracks observed from satellites, we can see that they largely disappear when restrictions are introduced, demonstrating the strong impact of aerosols.”

Detecting ships not in compliance with regulations

The team studied more than 17,000 ship tracks from satellite observations and matched them to the movements of individual ships using their onboard GPS.

The study period covered the introduction of emission control areas around the coast of North America, the North Sea, the Baltic Sea and the English Channel, which restricted sulphur in ship fuel to 0.5 percent, leading to fewer sulphate aerosol emissions.

The researchers found that in these areas, ship tracks nearly completely disappeared compared to before the restrictions, under similar weather conditions. 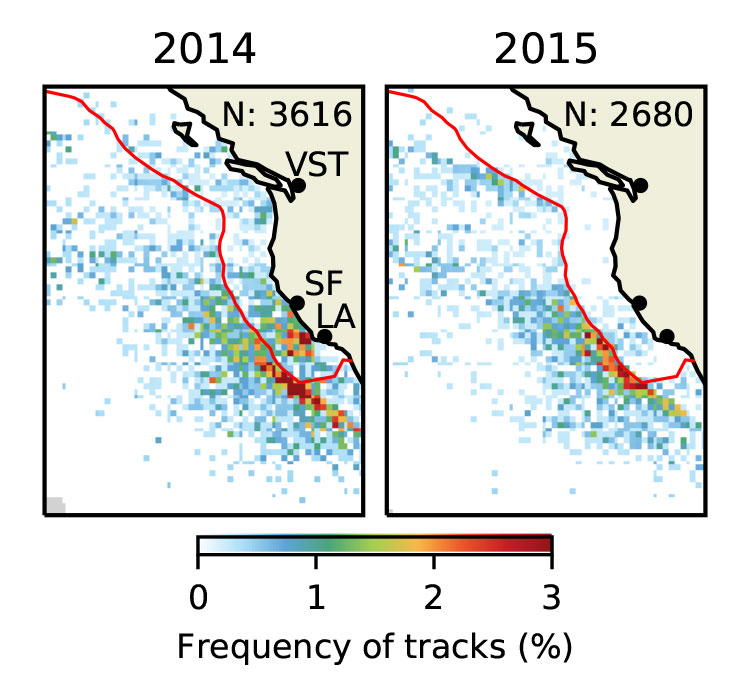 The frequency of ship tracks off the coast of California decreased almost to nothing as new regulations on sulphur emissions were introduced in 2015 (within the red line). Image Credit: AGU

This shows that sulphate aerosols have the most significant impact on cloud formation, as opposed to other components of the ship exhaust, such as black carbon.

The result also means that a ship not in compliance with the regulations, by burning the current high-sulphur fuels without exhaust treatment, could be detected because it would create a measurable difference in the satellite-observed cloud properties.

Co-author Dr Tristan Smith from UCL Energy Institute said “Currently, it is hard for regulators to know what ships are doing in the middle of the ocean. The potential for undetected non-compliance with the 2020 sulphur regulations is a real risk for shipping companies because it can create commercial advantage to those companies who do not comply.

“This study shows that science and technology are producing significant advancements in the transparency of shipping, and helping to reduce risks and unfairness for responsible operators.”

As well as exploring how the method could be used to identify ships that may not be in compliance with the 0.5 percent limit, the team now want to more precisely relate known ship fuel compositions to ship tracks, allowing them to more accurately predict the influence of sulphur aerosols on cloud formation on a larger scale, ready to feed into climate models.