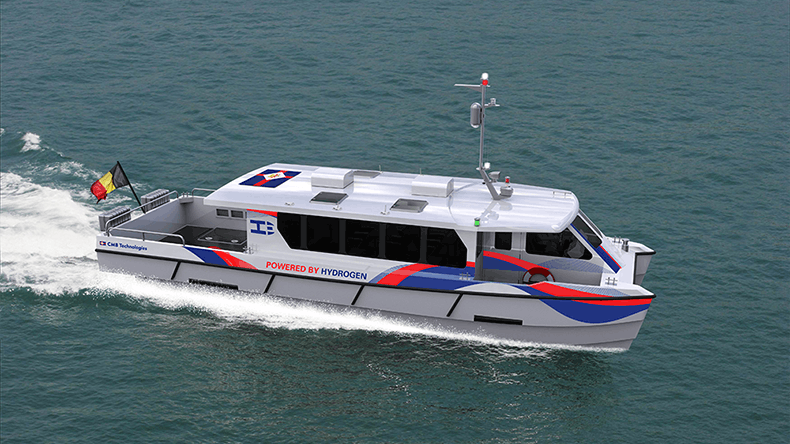 Hydrogen is competing with other alternative fuels such as LNG, LPG, methanol and biofuel as shipping seeks to meet the International Maritime Organization target to lower greenhouse gas emissions by 50% by 2050.

CMB today revealed its expansive investment in hydrogen technology that sees the Belgium-based shipowner lead the design and development of hydrogen-fuelled engines, as well as construct the first ships using the lower- or zero-emission technology.

Technologies and innovation subsidiary CMB Technologies is developing a hydrogen-powered crew transfer vessel for Ijmuiden-based vessel operator Windcat, the company said. It has also acquired the UK-based engineering firm that produced hydrogen combustion engines for the CMB-owned passenger shuttle boat, Hydroville, launched in 2017. Hydroville uses hydrogen to power a diesel engine and serves as a platform to test the technology.

Separately, CMB said the BeHyrdo joint venture with ABC Engines, formed in 2018, will commercially launch a hydrogen medium-speed combustion engine in 2020 for smaller ships including tugs, ferries and barges.

“People don’t believe in hydrogen for deepsea shipping because there’s a perceived storage problem. It does take up a lot of space… but green hydrogen will ultimately be the solution over liquefied natural gas,” CMB chief executive Alexander Saverys told Lloyd’s List.

“We are investing in tomorrow’s technology with today’s application for small ships and hope that further down the line we can expand this technology to deepsea vessels,” he said.

The cost of these investments was not disclosd, but Mr Saverys said there were no subsidies underpinning any companies.

Hydrogen is competing with other alternative fuels such as liquefied natural gas, liquefied petroleum gas, methanol and biofuel as shipping seeks to meet the International Maritime Organization target to cut greenhouse gas emissions by 50% by 2050.

Renewable or so-called green hydrogen is recognised as the cleanest fuel, class society DNV GL said in a recent paper on alternative shipping fuels. But liquefied hydrogen has low energy density, meaning that storage volumes required are very large, thwarting its commercial application for deepsea shipping — for now. DNV GL said hydrogen would be feasible only with massive subsidies.

LNG is emerging as the favoured alternative fuel, with hundreds of millions of dollars being committed. Shell’s shipping subsidiary is tendering for LNG-powered very large crude carriers, and miner BHP Billiton for LNG-powered newcastlemaxes, according to Mr Saverys.

While LNG had advantages in reducing SOX and NOX emissions as the cleanest fossil fuel, it was not the ultimate solution for greenhouse gas emissions, he said. Methane leakage for natural gas was at a rate of 1.7% along the oil and gas chain, according to the International Energy Agency, equating to 76m tonnes of emissions in 2015.

CMB’s newly acquired engineering business will be renamed CMB Revolve Technologies and sits alongside BeHyrdro. The company owns and operates 93 dry bulk vessels, and has container transport division Delphis and chemical tankers via the Bochem subsidiary.

Join the discussion about the future of hydrogen in the shipping sector at the Future Fuels for Shipping seminar, from Lloyd's Maritime Academy.