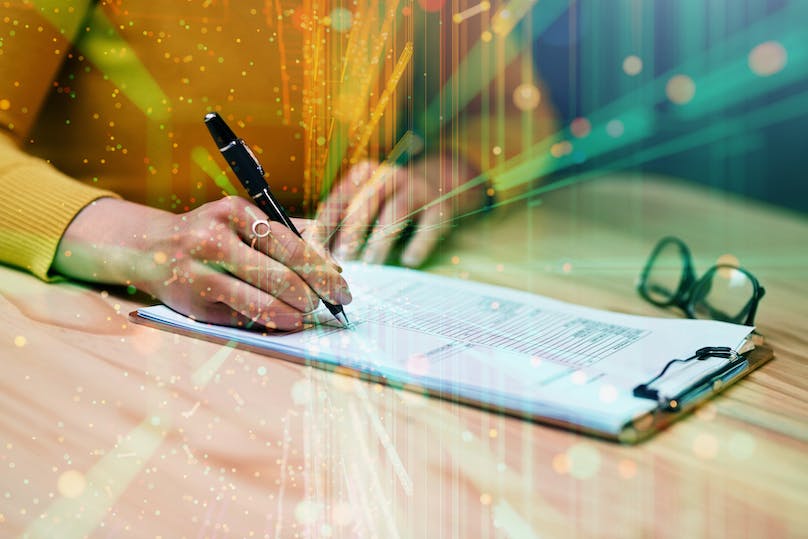 The true scope and success in the implementation of smart contracts in capital markets, and in particular in the financial derivatives, depends on technical factors and sociological. On the one hand, the technical capacity of smart contracts enables us to facilitate the negotiation and execution of transactions and increase the efficiency and transparency of the market. On the other hand, the power relations inherent to these markets and contracts will influence the design and implementation of smart contracts. What are the latest developments in this area? Ligia Catherine Arias-Barrera, Ph.D. in Law, University of Warwick, explores the key issues arising from personalised contracts and what that means for the financial regulatory agencies and risk management.

Smart contracts, as an application of decentralised blockchain technology, have been modifying the way in which contractual agreements are used. They are digital contracts1 that can be rigid, modular, dynamic and, in any case, less ambiguous than several of the traditional legal contracts. However, their adoption is not free from limitations and, to that extent, they are perceived as less private and quite complex for the vast majority of their users. Its high level of complexity can cause information asymmetry issues to persist between expert designers and users, as well as the late adopters of smart contracts.

In this sense, the smart contract is not per se a mechanism of transparency and efficiency that contributes to solving or, at least, reducing the impact of the information asymmetry that affects the vast majority of contractual relationships in the financial system. Likewise, the traditional problems associated with electronic data interchange (EDI)2, regarding their inability to change the way in which the parties assume and execute their commercial obligations, and the restrictive incorporation of terms and conditions of traditional legal contracts in electronic format, seem to have been overcome. The current version of smart contracts allows the creation of true computerised contractual terms3.

The law is impersonal and to that extent it cannot be designed to serve individual interests. However, this truth of yesteryear could find its most prominent exception in the adoption of innovation technologies focused precisely on the generation of tailored rules4. Cass Sunstein argues that the future, which is already present, will bring new waves of tailored rules due to the expansion of access to information promoted by new technological developments5. The discussion about the implications that the adoption of new technologies may have on the personalisation of the law (including the role of the law) has even come to consider that with the advent of new technologies, the criterion of the reasonable person could be abandoned as a parameter for determining individual liability. Thus, it is likely to be replaced by a subjective analysis of the tendency of each individual to create or reduce risks6.

In this sense, aversion or sympathy for risks is closely related to decision-making processes7. Thus, according to the prospect theory of Kahneman and Tversky8, there are two patterns that govern decision-making:

These individual peculiarities in decision-making and the asymmetry between assumption and generation of risks could strongly influence liability judgments as a manifestation of the possible customisation of the rules.

Following this trend, and particularly in the case of smart contracts, Wright and De Filippi have coined the term ‘lex cryptographia’9 to mean that with the adoption of new technologies there will be rules managed by smart contracts. These sort of rules will no longer be controlled by government regulatory agencies or by large companies or multinational associations. Instead, they will be controlled by information systems based on blockchain. The center of regulatory decisions will no longer be in regulatory agencies. Therefore, it is urgent to understand, from the legal theory perspective, how to regulate and shape the adoption of such systems.

What do smart contracts mean for risk management?

Several questions may arise from this change of control in the issuance and compliance with standards. We recognise that the discussion regarding fragmented regulatory spaces is not new. However, when the decision-making prior to the determination of the content and enforceability of the contractual clauses will be controlled by a decentralised blockchain, which in turn will follow the instructions given by the contracting parties and other participating actors, additional questions come to light. For instance, how do we avoid the negative effect of information asymmetry when it comes to investment decisions, i.e., the event of an expectation of profit or an expectation of loss. Following the guidelines of prospect theory, the decisions of individuals are not necessarily rational and do not always show an aversion to risk. On the contrary, decisions usually take into account the probabilities of profit and loss, which always involves a bet against tolerable and accepted risk. What determines the position taken is not the element of uncertainty but the need to avoid, at all costs, the assumption of losses. In other words, decision-making for even the most prudent is not tied to the amount of probable risk but to avoiding the occurrence of the loss.

Then, it is perfectly possible that the same decisions are made in different situations and that is why decision-making is not about seeking or being risk averse. It is about the utility or benefit that is sought or at least avoiding any loss situation. This formulation is known as the failure of invariance10 which is clearly reflected in one of the Wall Street maxims: you never get poor by taking a profit. If the design of a smart contract followed this logic, it would be programmed to reduce losses, something that does not necessarily coincide with investors’ interests, who assume losses as errors in investment decisions. However, in most cases the investment decision involves an amalgam of situations that in turn involve making other decisions. The failure of invariance simplifies the decision-making process as a whole, while not considering that the multiple decision-making steps included in the larger investment decision can be contradictory. In this scenario, the design of the smart contract must be in the capacity to receive those decisions and to translate them into code language. The challenge is to integrate these multiple contradictory decisions, reflect them in these digital contracts to prevent them from being reduced to becoming a simple replica of the limitations of the contracting parties’ decisions. In turn, an additional challenge is to prevent this new form of personalised decisions and regulations from threatening the integrity of the legal system and the certainty that it generates.

An illustrative case is the approach that speculators would have when they are designing their smart contracts. The very nature of speculators would place them as subjects prone to assuming very high risks in order to obtain long-term profits, taking advantage of the impact that price volatility can have on a market. Its advantage is offset by the aversion to risk inherent to other types of market participants who seek, in certain products of the financial system, e.g., derivative contracts, protection, and guarantee mechanisms. Aristotle11 explains it in Book I of Politics by defining option contracts as a “financial instrument that involves a principle of universal application” and the use of certain conditions to acquire fortune. The decision-making behind these types of contracts, as well as the way in which they are reflected in the content of the contract, show the diversity of interests of market participants. If the door is opened for smart contracts to be a source of personalised standards tailored to the parties without greater control of the legal system, conflicts of interest will prevent a correct and orderly adoption of this technological development. The constant interaction between the use of derivative contracts for risk management and financing mechanisms and their speculative function, shows that this market is particularly interesting to highlight the benefits and risks associated with the adoption of smart contracts.