Taking the Id Out of Idea 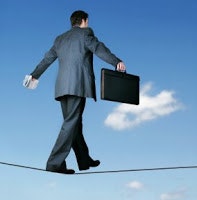 It perhaps would have been more appropriate to title this post 'Taking the Ego Out of Idea'. But this to me didn't seem as clever a title. My apologies to Freud. And in the discussion that follows, I actually use a more modern-day, less clinical definition of ego than the one originally presented by the good doctor. Again, my apologies to Freud.

The ego, as postulated by Freud, is the psychic apparatus that represents what may simply be called reason and common sense. Acting in accordance to the 'reality principle', the ego contains the executive, intellectual-cognitive functions used primarily to prevent the neurotic, sometimes negative, more instinctual elements of our personalities from surfacing at inappropriate times.

A more common definition of ego used in everyday life centers around the idea of self-worth. Although ego is technically a neutral term (from Freud's perspective, it mediates between the id and superego) we often hear people use it in slightly negative contexts to refer to a person's overdeveloped sense of self-importance. Sometimes you'll hear a somewhat benign comment like 'you've hurt his ego' (as in self-esteem). But more often you'll hear something like 'he's got a really big ego' or 'he's going on an ego trip'. Such statements don't reflect positively on the target of the comment.

I'm of the opinion that ego - the over developed sense of self-importance - should be removed from idea development and subsequent product development processes. As with so many other endeavors, ego just seems to get in the way most of the time. It can cause people to make bad decisions. It can cause conflicts and problems that could easily be avoided.

I feel as though I'm walking a fine line here by suggesting ego be eliminated from the idea development process. I whole-heartedly believe idea development should be a personal and passionate experience. A person should feel that their ideas are important and strive to develop them with vigor. There is a difference however between making a process personal and taking it personally.

I have had the great fortune throughout my career to have developed a wide variety of new products in many different industries. One product that was particularly gratifying to develop was the charades-based board game Stumblebum. As the founder of Big E Toys, I personally took this product from initial idea, through concept and product development, to store shelves. It was, as you might expect, a very personal, satisfying experience.

Throughout the testing process for Stumblebum I distinctly remember the necessity to continually remind game testers that they weren't going to hurt my feelings if they provided critical feedback. Much of the initial testing happened to be performed with friends and family, then friends of friends, and so on. Perhaps the sensitivity demonstrated by testers was inevitable given the participant pool. That being said, I found myself telling them 'you're not going to hurt my feelings. I need you to be honest about your thoughts, feelings, and experience with the game. It doesn't do me any good if you simply tell me you like it.' Fortunately I hit the mark with Stumblebum. Initial testers of the game truly enjoyed themselves and now the game is enjoyed by countless others throughout North America. Although the development of Stumblebum was a very personal experience for me, I did not take the inherent ups and downs of the process personally.

As idea and product developers we must be passionate, but not cling to poor or deficient ideas simply because they are our own. Remember to check your ego at the door.