The Back End of the Front End of Innovation 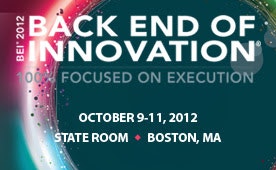 Once a company's creative juices are flowing, guided by ideation processes and supported by systems, a steady stream of ideas passes through the front end of innovation towards the point at which the $64,000 question can be posed: to implement or not to implement?

By this time, an idea will have been nurtured, developed, tended and nursed. It will have survived the rigours of peer comments and early review, and it will have grown from a seedling to something that looks like it could, perhaps, survive the natural selection of the product development world.

With this intellectual investment in mind and balanced against a company's capacity to develop new products, "to implement or not to implement?" is clearly a decision that can't be taken too lightly. Tests and schemes are available to help determine whether an idea should be developed further or not. Ideas passing the test are taken forward as concepts, subjected to more scrutiny in Stage-Gate' processes, and, if their initial promise holds up, are taken on into product development initiatives to fill the shelves, warehouses, showrooms and web sites of our world.

In contrast, those ideas that didn't quite make it remain in a state of limbo, waiting for a future review that might transplant them into further development, and wilting as time passes.

My guess would be that this shadow world of ideas-in-limbo is a large, untapped resource that could be put to use, given the right licensing and protection models. Rather like the trading of unused furniture via ebay.com, the trading of un-implemented ideas via an ibay.com might reveal some interesting opportunities which would otherwise never see the light of day . There are existing approaches in the non-profit world.

Why not discuss this with Sopheon at FEI Europe in Amsterdam next week? Or if you're interested in best practises in the area of idea development, click here.