In 2019, McKinsey asked companies to prepare for the possibility of a recession. Of course, we had no idea then that the Covid-19 pandemic would be the trigger, nor that the recession would cut as deeply as it has. But it was clear then that the foregoing growth cycle was already of unusual duration. The pace was slowing, furthermore, and the potential for shocks was greater than for renewed growth. In the same article, we discussed what top-performing companies had done in the previous downcycle, the financial crisis of 2008–09. We looked at 1,500 public companies in Europe and the United States, analysing performance on a sector-by-sector basis. Companies in the top quintile of their peers through that crisis were dubbed the “resilients”.

Once economic and business results of the second quarter of 2020 became known, we began to hunt for the clues that were contained in nearly 1,500 earnings releases across Europe and the United States. This article seeks to understand whether the shape of the next class of resilients is visible in the data, and what lessons this would hold for companies within each sector.

The present downcycle: Six times faster than the previous one

Today, we are in the middle of the deepest recession in living memory. As pandemic-triggered lockdowns took hold around the world in early 2020, economies contracted quickly. The International Monetary Fund and World Bank foresee a global contraction in economic output in 2020 of around –5 percent; the Organisation of Economic Cooperation and Development estimates an even worse result, at –7.6 percent. At any rate, the drop will far exceed the last global contraction, which was –1.7 percent in 2009.

The distress has hit all industry sectors, some harder than others. Yet even in the relatively protected sectors of healthcare, pharmaceuticals, and technology, companies are seeing moderate declines in revenue. Heavily affected sectors have experienced revenue declines of between 25 percent and 45 percent. These include transportation and tourism, automotive, and oil and gas—sectors containing some of the largest employers in Europe and the United States.

We recognised that this downturn was driving stress into the economy at a much faster rate than was experienced in the financial crisis of 2008–09. To measure the extent and speed of the damage, we wanted a sounder guide than stock-market performance. An investigation of the companies in our database using the “Altman Z-Score” yielded promising results. This measurement was developed in 1968 by Edward I. Altman, now a professor emeritus of Finance at New York University’s Stern School of Business. It is an equation originally designed to predict the probability of corporate bankruptcy. A company’s Z-Score goes up if it has a well-established ability to grow margins (measured as EBIT1/assets) while increasing revenues (measured by revenue/assets) and maintaining optionality (measured by retained earnings/assets).2

We calculated the Z-Scores for approximately 1,500 European and North American companies in our database for both the last downcycle (2008–09) and the current one.3 We used three categories in the results: “good standing,” “gray zone,” and “experiencing stress.”4 The Z-Scores revealed that in the financial crisis of 2008–09, 30 percent of companies moved to a higher-stress category by 2009, compared with where they were in precrisis 2007. Only 3 percent of observed companies improved their standing. By comparison, in 2020, 25 percent of companies had moved to a higher-stress category and 3 percent improved. The dynamics of 2009 and 2020 differ in one glaring respect: in the last recession, this movement occurred over 18 months, while in the present crisis, the economy has arrived at about the same point in three months’ time—six times faster. 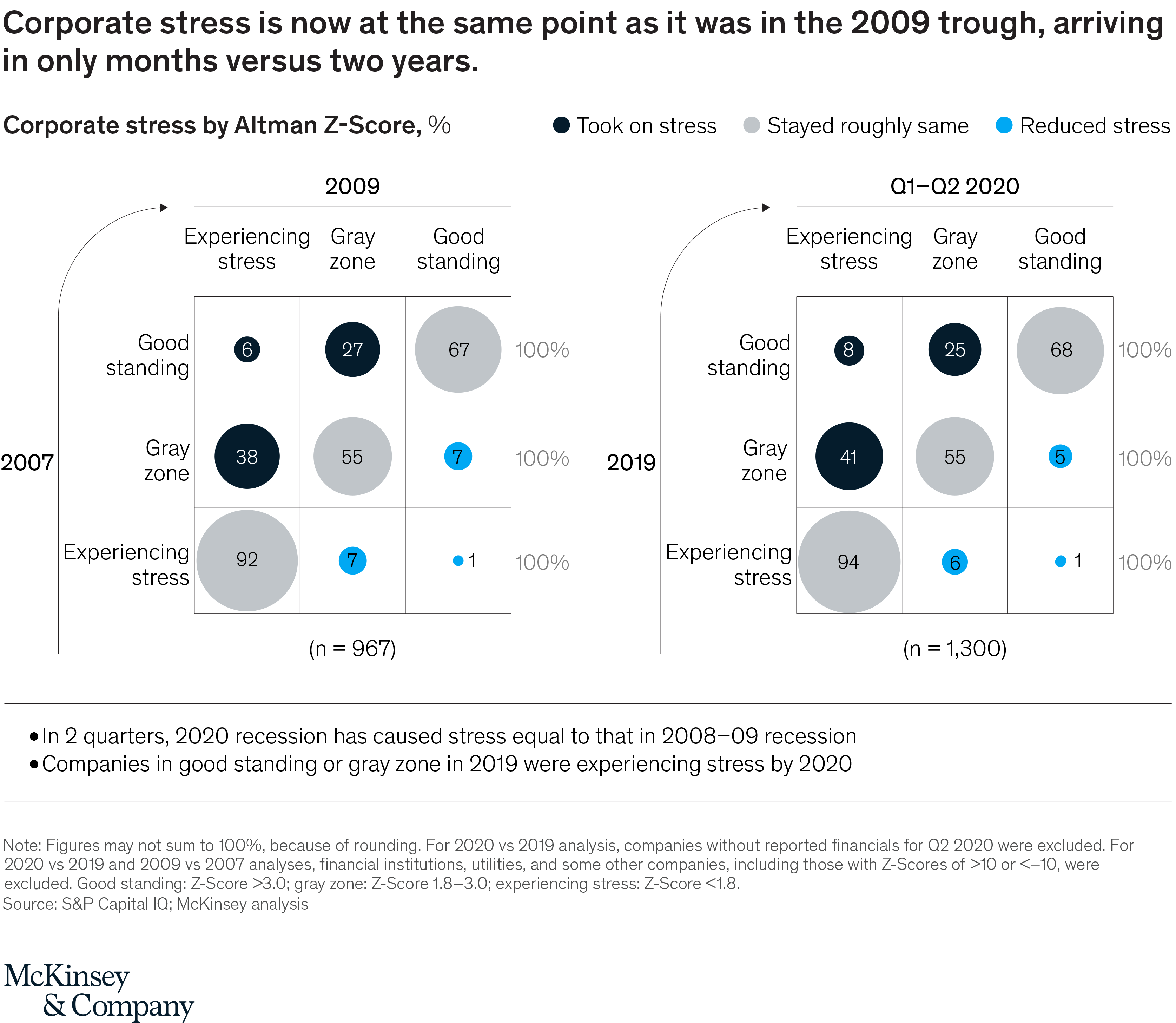 Fast and deep—but for how long?

Our recent conversations with business leaders suggest that the high level of external uncertainties— political, social, and epidemiological—will likely be with us well into 2021. This will be true whether or not a Covid-19 vaccine becomes available during that time. New challenges can also be expected, such as when governments pull back on the levels of fiscal stimulus that might have been nourishing green shoots of recovery.

Leaders can thus assume dynamic business conditions through 2021 as they begin this year’s planning cycle. Wise planners will prepare for a number of outcomes, including a further drift in present conditions or a worsening downturn. In our view, however, they must also be open to the appearance of more positive trends and ready to shift quickly to a growth stance. This means building optionality balanced with tangible, trigger-based growth bets into their plans.

Leaders can do this by taking an owner’s view of their business, comparing it to their peers’ rather than their own past performance. Peer benchmarking can more readily become the starting point for developing a strategy to achieve full business potential. Companies need to know: What are tomorrow’s resilients doing today to achieve “escape velocity” when the time comes?

In this crisis, business leaders sometimes take solace in the relative ebullience of the stock market or the fact that peers are suffering from the same issues that they are. A quick look back tells us, however, that stock markets are poor predictors of success during a recession. The companies that led equity markets during the recessionary trough of 2009 did worse by the end of the cycle relative to the companies that made up the middle tier. 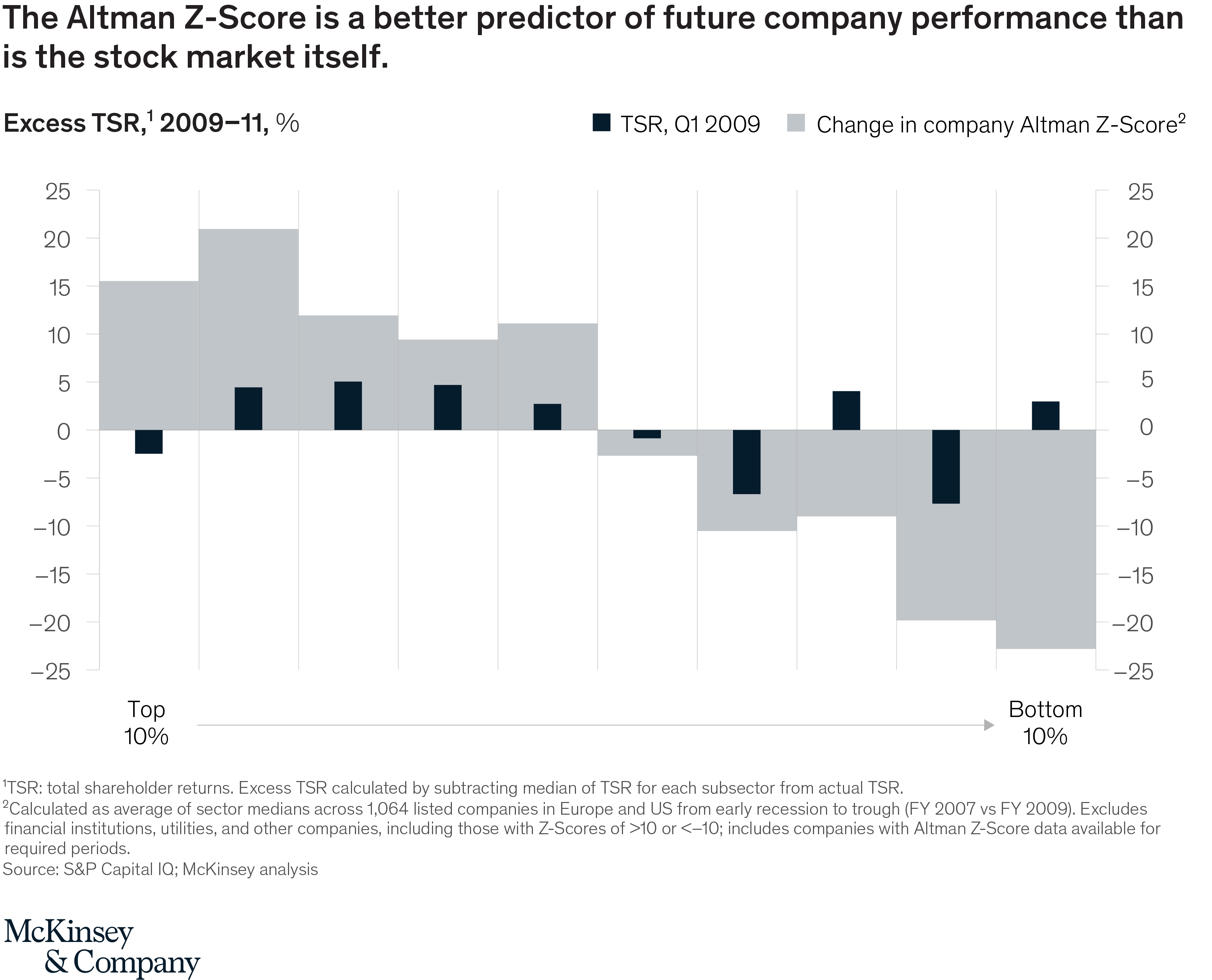 The Altman Z-Score turns out to be a better directional indicator of post-downturn market performance than does the market itself. The Z-Score helps highlight three outstanding attributes of resilience: margin improvement, revenue growth, and optionality (retained additional optional investment opportunities).5 Our research clearly suggests that coming out of the trough of the last recession, the top performers had achieved balanced improvements in all three of these measurements of organisational health— irrespective of whether they had spikes in any one of them. We have concluded that to be counted among the new resilients, companies must find this balance. 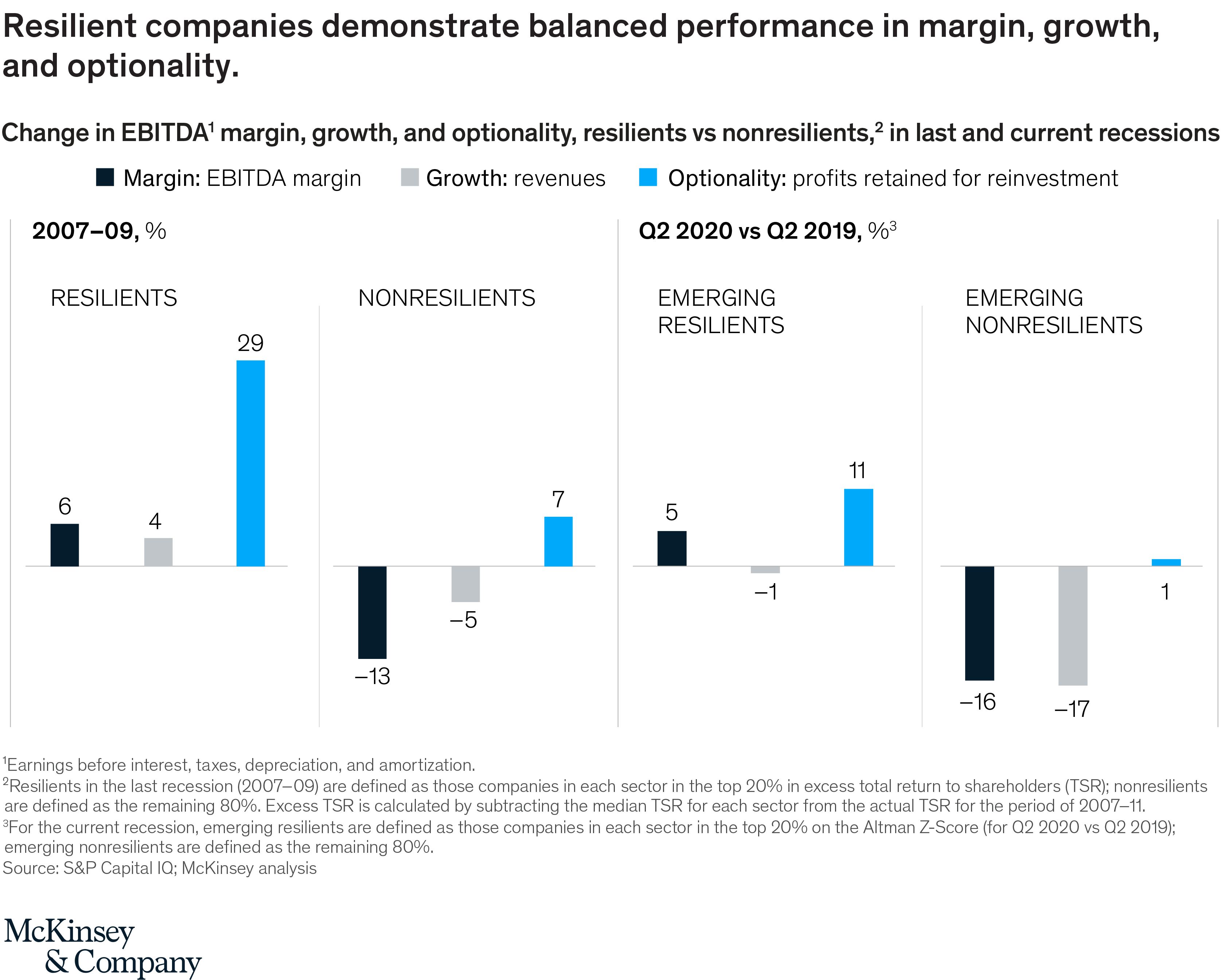 Learning from the emerging resilients

In every sector, we identified the top 20 percent of companies that have driven the highest increases in their Z-Scores through the 2020 recession. We then compared their performance with that of the rest. This is what we found:

The gap in margins between the emerging resilients and the rest of their peer group is striking. The typical emerging resilient in 2020 has increased the EBITDA6 margin by 5 percent while the rest have lost –19 percent by this measure, a gap of nearly 25 percent. The difference is much greater than the EBITDA margin gap was among the resilients in the last recession. This would suggest that today’s margin leaders will dominate their sectors more firmly coming out of this recession.

The emerging resilients—and companies overall—seem to be leaving less optionality on the table today compared with what happened in the last cycle. Retained-earnings growth for emerging resilients is 11 percent today, whereas it was 30 percent at the time of the 2009 recessionary trough. For nonresilients, the optionality measurement is 1 percent in this cycle, while it was 6 percent in the last. 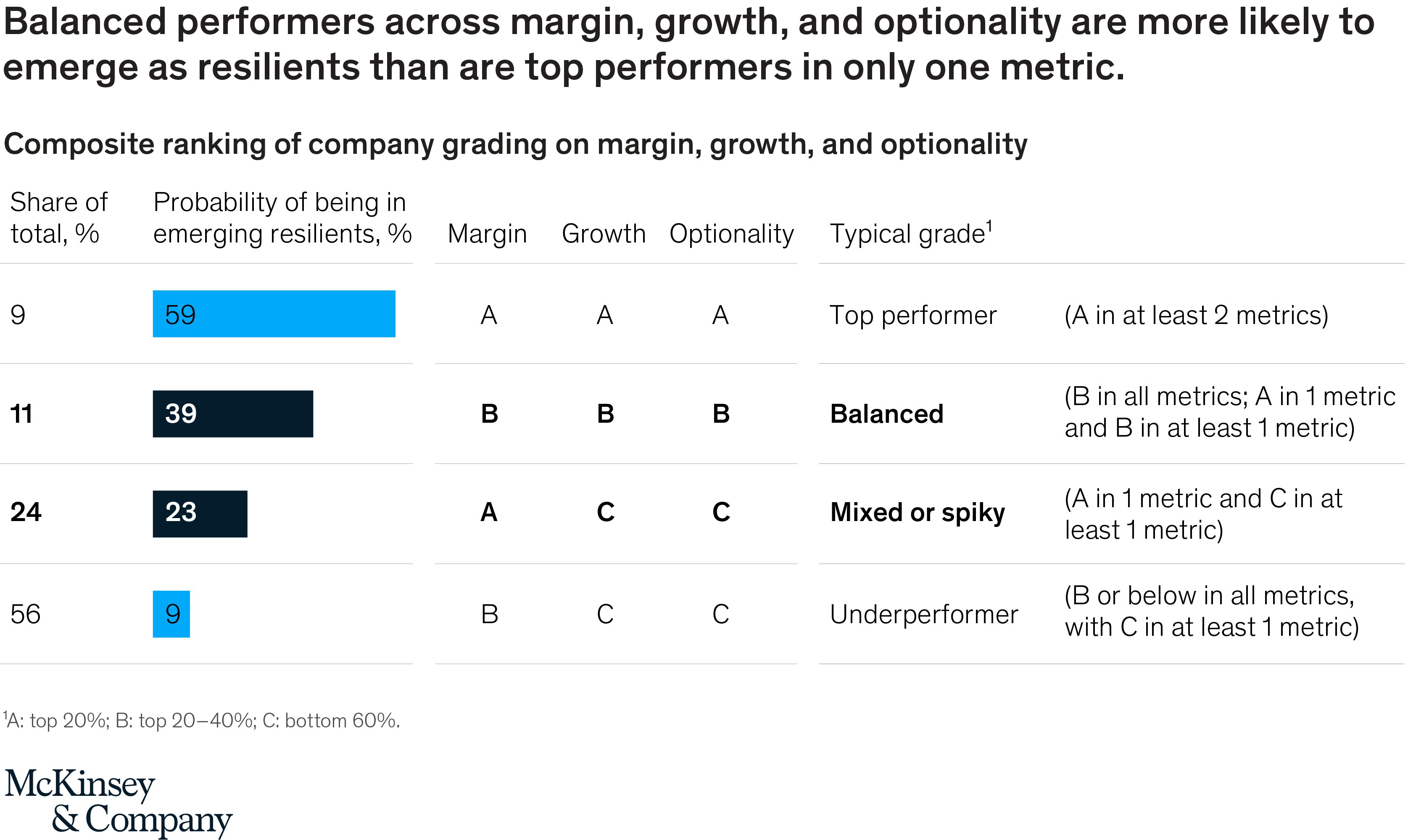 By sector, we discovered that the emerging resilients are more likely to demonstrate consistent, balanced performance across a number of metrics, as opposed to having a leadership spike in one and lagging performance in the others. This brings us to our final insight: tomorrow’s resilients are more likely to be the companies that are driving value added growth while balancing optionality, rather than those that focus most of their attention on maintaining operating margins, at the expense of other proportionate measures.

Using the Z-Score to zero in on what matters

Z-Score insights can help leaders take an ownership view and think more clearly about what their organizations can achieve—especially by freeing themselves of unnecessary traditional limitations. In this recession, we have already been afforded meaningful glimpses of the possibilities. Faced with a global health crisis requiring physical distancing and other restrictions, companies shifted quickly to remote operating models.

In a matter of weeks, companies provided the workforce with new flexibility and skills where needed while maintaining or even increasing productivity. They massively expanded digital and online capacities to maintain customer relationships and deliver goods and services remotely and efficiently. They reconfigured supply chains to drive greater resilience. And they set higher standards for diversity and inclusion, providing a much needed leadership stance on making social change happen through better corporate citizenship. Imagine what companies might be able to do in 2021.

Let’s start with the companies in the top quintile of their sectors according to the Z-Score. They are already creating the conditions that allow them to generate value-added growth while maintaining optionality. They are therefore best positioned to realize their full potential. For these companies, first on the planning agenda is setting high aspirations for 2021. These can be defined by bold moves to drive rapid revenue growth, portfolio reallocation, value creating M&A, and revamped technology spending.

Companies that are behind the top Z-Score performers in their sectors need to discover what is holding them back. They may be overemphasising cost cutting or pursuing a strategy of growth at all costs. They might be overprioritising investor payouts at the expense of their organisational health. They may be spreading their efforts thinly across many priorities instead of focusing tightly on driving margins and productivity. Leaders should also consider rethinking their supply chains end to end, especially to improve resilience.

Depending on their standing, lagging companies may need to focus their efforts on different drivers of growth. Almost universally, however, all companies will need to continue strengthening their organisation, so that they may provide more flexibility to the workforce while executing operations at full speed. The experience of most sectors demonstrates that companies which execute faster tend to outperform.

Companies’ experiments with creating new post-pandemic operations models are yielding some interesting results. Digital platforms are allowing some companies to share skills across operations, providing support in ways that were very difficult before. The same approach is also allowing workers to enjoy more opportunities while creating

an effective post-pandemic operating model that solves for speed and rapid decision making. These are the next-horizon powers that will drive productivity and propel the emerging resilients into the next wave of growth.

This article was originally published on McKinsey.com on October, 6, 2020, and is reprinted here by permission.