The History of the Heinz Ketchup Bottle 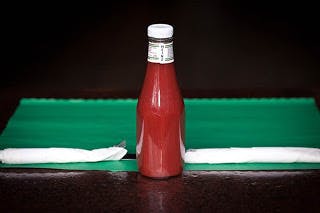 What do you think about when you see a bottle of Heinz
Ketchup? If you're like most people, you don't pay close attention to it. But
even commonplace objects have been designed, and simple questions about the
design of something as unremarkable as a bottle of ketchup can have insightful
answers.
So, what is the meaning behind the "57 Varieties"
label wrapped around the bottle's mouth, and why is it there? Why is a bottle
of Heinz Ketchup transparent, instead of opaque?  Today, we associate ketchup with tomatoes, but
according to Fast
Co.Design, ketchup was actually around for hundreds of years before anyone
even dreamed of using tomato.
The history of ketchup extends back to the 16th century,
when British settlers in Fuji were introduced to a sauce used by Chinese
sailors called ke-tchup. Local recipes for ke-tchup varied, but the
first recipe on record dates back to 544 A.D. and instructs any manufacturer
to, "take the intestine, stomach, and bladder of the yellow fish, shark
and mullet, and wash them. Mix them with a moderate amount of salt and place
them in a jar. Seal tightly and incubate in the sun. It will be ready in twenty
days in summer, fifty days in spring or fall and a hundred days in
winter." The original ketchup was in fact, fish sauce. But, when British
traders headed back to England with a taste for the sauce, anchovies were taken
out and replaced with walnut and mushroom ketchup.
As they experimented, the English enjoyed ketchup for 200
years before anyone thought of adding tomato. The resistance to tomato
ketchup can be chalked up to the misconception among Europeans that tomatoes,
which looked identical to deadly nightshade berries. Tomatoes were considered
an ornamental curiosity for gardens ever since Cortez had brought them back
from the Americas, but they weren't meant to be eaten. Then in 1820, Colonel
Robert Gibbon Johnson of New Jersey, stood on the steps of the local courthouse
and consumed a basket of tomatoes to prove they weren't poisonous. 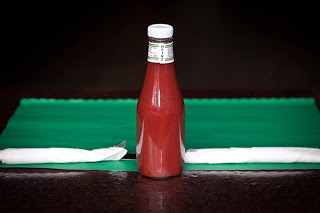 Image via Fastcodesign.com
In the 1830s that America realized tomatoes could be
delicious. In 1834, an Ohio physician named Dr. John Cook Bennett declared
tomatoes to be a universal panacea that could be used to treat diarrhea, bilious
attacks, and indigestion. Soon, Bennett was publishing recipes for ketchup,
which were then concentrated into pill form and sold as medicine. By 1876,
tomatoes had undergone a remarkable turnaround in the court of public opinion.
Tomato ketchup was popular and considered to be a tonic, a condiment that was healthier than
normal ketchup.
But, at the time, nothing could be further from the truth. "Filthy,
decomposed and putrid" were the words that cookbook
author Pierre Blot used in 1866 to describe the ketchup being sold at the
time. Prior to the Pure Food and Drug Act of 1906, the food manufacturing
business could be described the same. The reasons ketchup was such vile slop
are varied, but start with the shortness of the tomato season, lasting from
mid-August until mid-October. However, by the late 19th century, Americans were
used to expecting ketchup year around. A year's worth of ketchup could not be
made in two months, so manufacturers preserved tomato pulp to meet expectations.
Unfortunately, they did so with the same
lack of quality control that was endemic in the food manufacturing industry at
the time. The result was that ketchups in the 19th century were disgusting
filth, and only got worse in processing. To prevent the ketchup from moldering
further, ketchup makers filled their batches with harmful preservatives.
Then, because ketchup with the pulp sieved out is more
yellowish than anything else, coal tar was added to dye the ketchup red. This
was the state of ketchup when Henry J. Heinz released his first bottle in 1876.
But Heinz was a visionary, believed that "heart power is better than horse
power." Under his leadership, the H.J. Heinz Company was ahead of its
time. The factories were models of progressiveness. Not only were Heinz
employees given life insurance, death insurance, doctor services, but also
access to dining rooms, medical stations, and gyms.
Heinz's factories were such models of cleanliness that
30,000 visitors were allowed to tour the factory every year.  At a time when no one else cared, Heinz was
obsessed with making his products as pure as possible. In fact, when Heinz
began his career selling horseradish, he refused to sell it in the brown opaque
bottles common at the time. Instead, he used transparent jars, so that buyers
could see his horseradish's purity for themselves before they gave him a penny.
It wasn't until 1904 G.F. Mason, was
able to find a good preservative-free recipe for ketchup. Before then, Heinz
used many of the same preservatives as his competitors, even coal tar to dye
his ketchup red. By 1906, though, the nut had been cracked, and Heinz was
producing five million bottles of preservative-free ketchup every year. "It
is always safe to buy the products of an establishment that keeps its doors open,"
Heinz once famously wrote.
Every bottle of Heinz Tomato Ketchup sold is see-through is
no accident. It's a design statement: purity through transparency. Each bottle
of ketchup somewhat brags about the company's "57 Varieties" in a
small label wrapped around the neck. That there are 57 varieties of Heinz
products has never been true. Inspired by an advertisement he saw on a
train for a company that made "21 varieties" of shoes, Heinz combined
his favorite number, 5, with his wife's number, 7, to brag about his company's
breadth of products. When he first began to put the "57 Varieties"
label on his ketchup bottles, the H.J. Heinz Company already produced over 60
different products. So "57 Varieties" has always been playful
nonsense. But the small label that circles the mouth of every bottle of Heinz
ketchup sold? It's purely functional.
Naturally, ketchup is watery, because the tomato pulp that
gives it consistency is sieved out. As a result, commercial ketchup makers add
a small amount of xanthax gum to their ketchup recipes to thicken it. But this
ingredient has another side effect: It turns ketchup into a thinning fluid. That
ketchup is non-Newtonian is the main reason why getting it out of a glass
bottle is so slow. Allowed to flow naturally, ketchup only travels at a speed
of 147 feet per hour. The only way to speed it up is to apply force, which
through the principle of thinning decreases the ketchup's viscosity. This is
why you have to thump a bottle of ketchup to get it flowing from the bottle. If
you apply force to the bottom of a bottle of Heinz, the ketchup closest to where
you smacked will absorb the force of impact. It will flow freely, but the
ketchup that is clogging the neck and mouth of the bottle won't, leaving you no
better off than you were before. The solution is to trigger the shear thinning
effect at the top, not the bottom. That unclogs the mouth and lets the
ketchup below to freely flow.
All in all, a bottle of Heinz isn't just a container of
ketchup. It's a design classic because of everything besides the
ketchup it manages to bottle up: not just the history of a condiment or an
object lesson in physics but the guiding principles of a great man who
believed, more than anything else, that good design was transparent.
Amanda Ciccatelli,
Social Media Strategist at IIR USA in New York City, has a background in
digital and print journalism, covering a variety of topics in business
strategy, marketing, and technology. She previously worked at Technology
Marketing Corporation as a Web Editor where she covered breaking news and
feature stories in the tech industry.  She can be reached
at aciccatelli@iirusa.com. Follow her at @AmandaCicc.