VW innovates by looking back 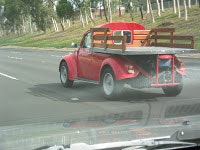 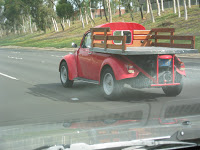 No, not another New Beetle. VW has just launched a viral marketing campaign based on the popular road-trip game of "Punch-bug" *(also known as "Punch-buggy" or "Slug-bug"). In case you don't know, the game works like this: when you spot, say, a red VW Beetle (or "Bug" as they're sometimes known in the U.S.), you punch the person next to you in the bicep and say, "punch-bug red," or whatever color the car is. I've been playing since I was a little kid, and have the bruises to prove it. That means the game has been around at least 40 years (Wikipedia notes that consensus has it invented in the 1960's) Now VW claims to have found "Sluggy," the inventor of the game. They even have an "interview" with him that documents the game's creation. I found it amusing. I wonder who will claim to have found the inventor of "shotgun," the rule-based game that determines who sits in the front passenger seat? The lesson? When your offering has some cultural value attached to it, apply some creative thinking to see what you can do to leverage it. While the campaign is too new for us to know if it will work, consider it stimulus for you to answer these questions: 1) What are some unusual ways people relate to our brand/offering? 2) How might we leverage perceptions of our brand/offering? 3) In what ways might we have some fun to get some attention? 4) How might we get people to blog about our campaigns? What other learnings can you glean from this marketing innovation?