What are the impacts of the Federal Reserve's policy intentions? 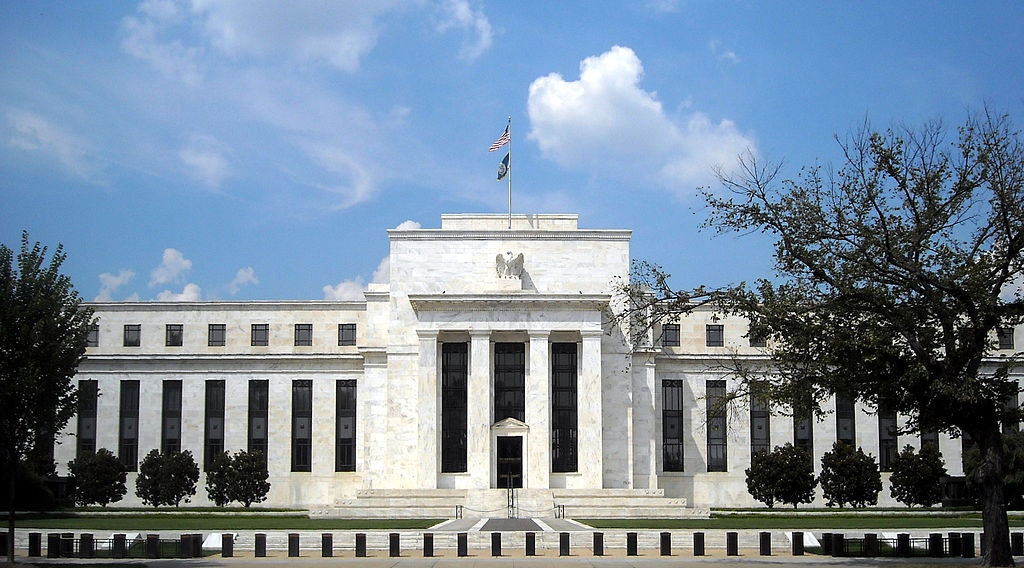 CIO and Managing Director at Boston Private Wealth, Shannon Saccocia gives her verdict on the impact of the Federal Reserve's policy intentions.

Lately, there are few destinies that seem more closely intertwined than that of the Federal Reserve and risk markets. As we enter year eleven of the market’s recovery following the Great Recession, investors are watchful of factors that could lead to the next downturn.

Atop that list is an overly aggressive Federal Reserve that could end an economic recovery by raising rates too quickly. Heading into the end of 2018, the Federal Funds rate had been hiked nine times in three years, and cracks were starting to show in the economy, especially rate-sensitive sectors such as autos and housing.

Chairman Jerome Powell and the Federal Open Market Committee (FOMC) were slow to get the message. As late as the December meeting, the FOMC was projecting two more rate hikes in 2019, and continuing to let their balance sheet decline by letting maturing securities remain un-invested.

The stock market strongly voiced its displeasure with this policy, with the S&P 500 posting a negative 13.52% return in the fourth quarter. High Yield bonds, another representative risk asset, returned  negative 4.53% in the fourth quarter, as credit spreads widened by 220 basis points or 2.2%.

"We have a modestly positive view on fixed income for the remainder of 2019, although that outlook is tempered by the gains that have already accrued to bondholders in the first quarter."

Fast forward to the end of the first quarter of 2019, since then Chairman Powell has frequently communicated “patience” in regard to future rate hikes. The FOMC is now forecasting zero rate hikes for the remainder of 2019, and their reduction of the balance sheet will conclude later this year.

Consequently, risk markets and the Federal Reserve have enjoyed a reconciliation of sorts in the first quarter of 2019. The S&P 500 has recouped all of the losses from the prior quarter, and lower yields and tighter spreads helped High Yield bonds (as measured by the Bloomberg Barclays U.S. High Yield Index) post their best quarterly return since the third quarter of 2009. 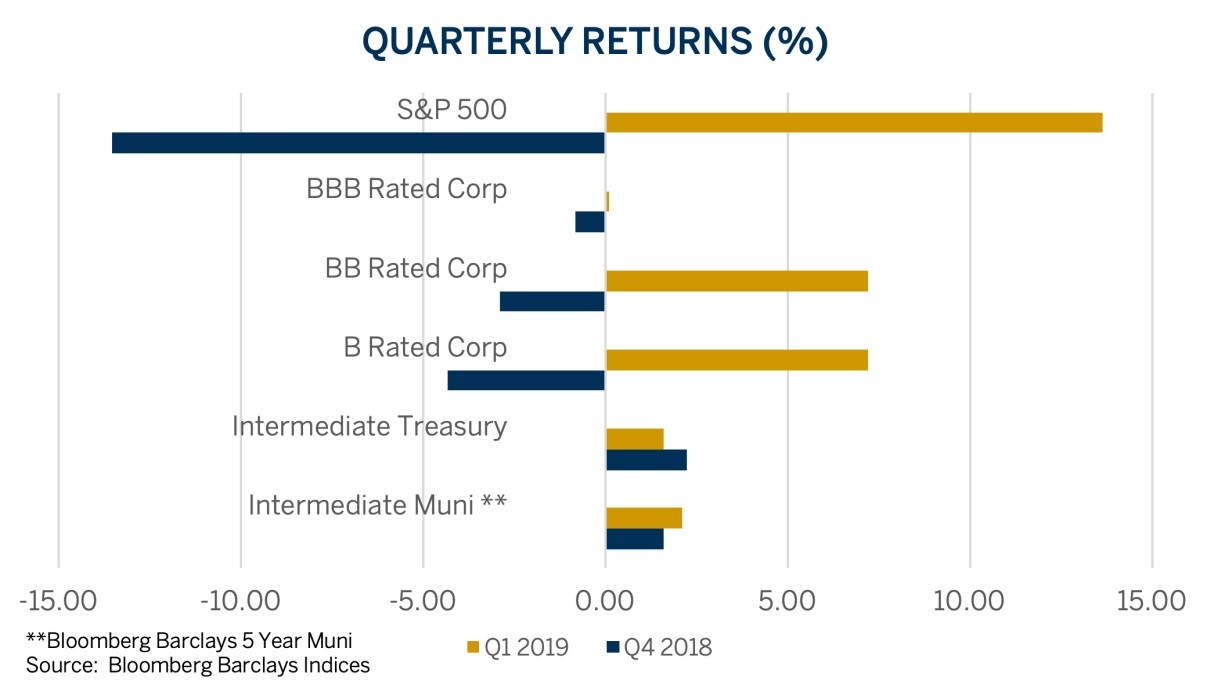 A move lower in interest rates and improving credit conditions also helped the Bloomberg Barclays Five Year Municipal Index generate a 2.11% return for the first quarter. Reduced supply and persistent demand for tax-exempt assets have been the major tailwinds supporting the sector.

Municipal credit remains strong on the whole with property, sales, and income taxes broadly higher. States have been adding to reserve funds and making an effort to tackle healthcare and other post-employment benefit obligations.

Even the much maligned state of Connecticut, has been awarded a positive outlook by S&P Global for Governor Ned Lamont’s proposed “Debt Diet”, which aims to shrink the state’s borrowing by 39%.

"The FOMC is now forecasting zero rate hikes for the remainder of 2019, and their reduction of the balance sheet will conclude later this year."

Credit quality is stellar, but unfortunately for buyers, valuations reflect this strength. The yield on an AAA rated ten year municipal bond is 1.93%, compared to its three month average of 2.08% as investors have sought the safety of municipal bonds.

A standard way to measure municipal bond value is to compare the yields to their taxable U.S. Treasury counterparts. Over the last five years the average ratio of 10 Year municipal yields to 10 Year Treasury Yields has been 91.6%1.   Currently that ratio stands at 76%, one of lowest levels on record.

Maybe more importantly than yield, municipal bonds have been mostly immune from the prevailing volatility in other asset classes, and historically this has also been the case.

When looking at five year quarterly returns of the major fixed income asset classes, municipal bonds have shown the highest tax-adjusted return per unit of risk. It is for this reason that we favor the asset class as we move later in the economic cycle, especially for high tax bracket individuals. We expect better buying opportunities to arise this year. 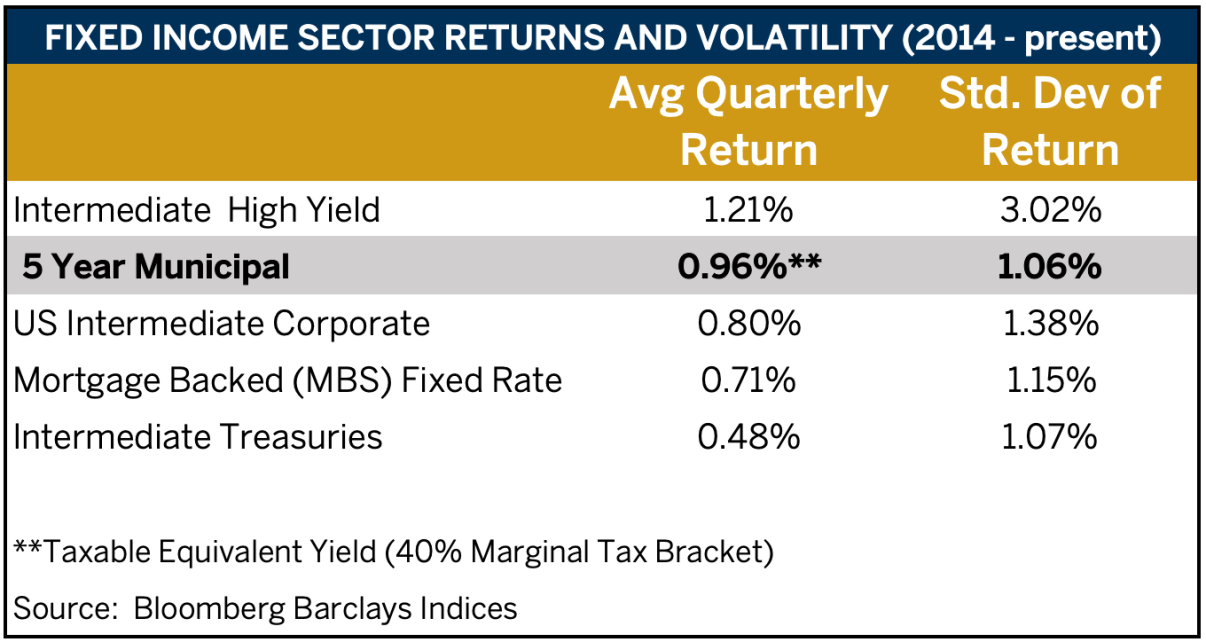 We have a modestly positive view on fixed income for the remainder of 2019, although that outlook is tempered by the gains that have already accrued to bondholders in the first quarter.

Along with that outlook, comes the belief that interest rates should drift modestly higher, yet it will be hard for the 10 Year US Treasury to move back above 3%. The U.S. appears once again to be the favored place to invest globally, and that should support the U.S. dollar, dampen inflation, and contain interest rate levels.

Furthering this view is the inaction of Federal Reserve, who appear poised to keep short term rates at current levels for the remainder of 2019. Over the last couple years, our focus has been to upgrade quality in portfolios and periods such as now are opportune times to do so.

Any increases in rates or weakness in credit will be treated as buying opportunities, but for now we find it prudent to trade out of riskier positions and limit duration exposure.

Paying particular attention to credit and issuer quality, both in corporate and municipal bonds, will help continue the positive momentum that has occurred already in 2019. 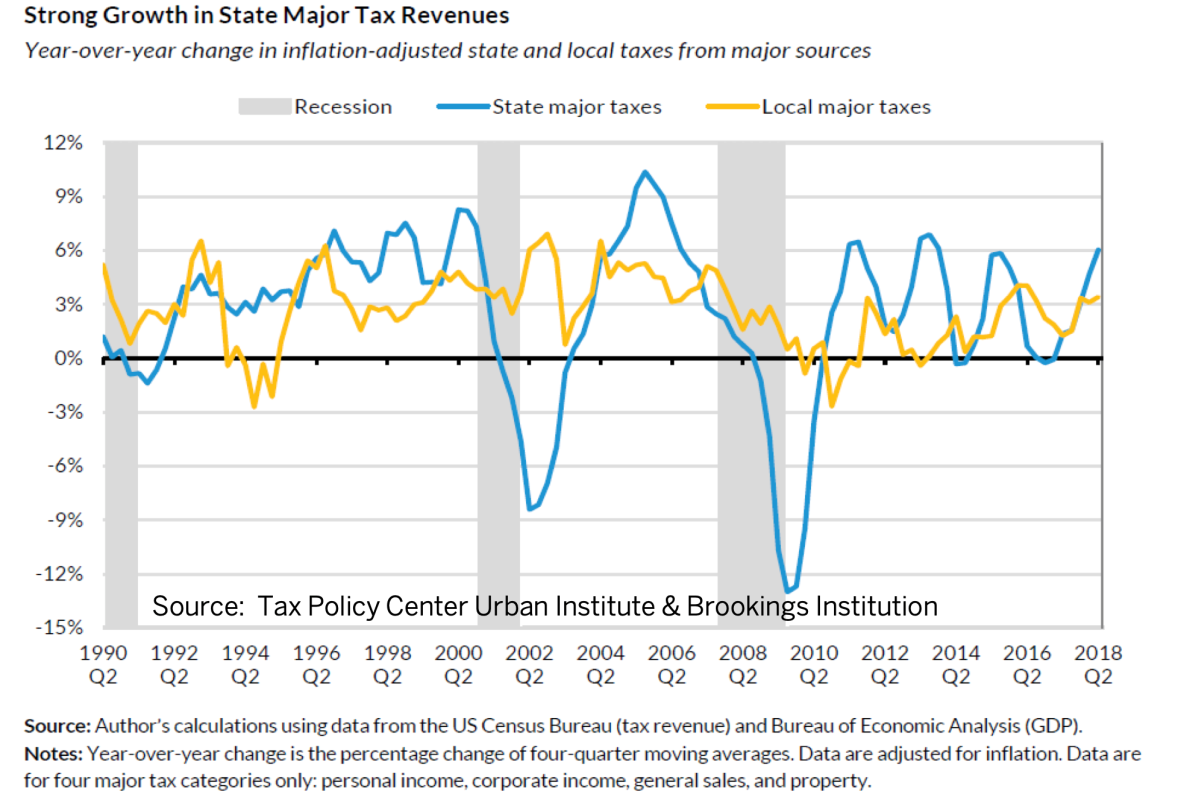