A Journey Toward Commercialization 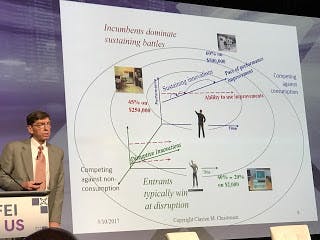 A Journey Toward
Commercialization
A Case Study in Xerox's Venture into Telemedicine
A BEI 2015 talk given by Denise Fletcher,
Xerox.
Xerox has more than 5,000 researchers and a deep history of
innovation. Xerox has six research centers across the globe.
Telehealth has reached market readiness. Forces converged to
make the market ready: doctor shortage, larger population, and Affordable
Healthcare Act.
Meanwhile, consumers are demanding more and better care,
'on-demand' care. As well, most people have access to smartphones. Finally,
regulations changed to adopt telemedicine.
Consumers seek care everywhere. They don't want to wait a
few days. As well, they want care that easy to access anytime, anywhere.
Xerox already works in 1,900 hospitals, with Payors, and
with large employers; so getting into the space made sense for the company.
Challenges arose:
'
Interoperability
'
Clinical workflow
'
Security and Privacy
'
Physician involvement
To enter the space, Xerox invested in HealthSpot.
The build out and operational cost of a clinic versus a
telemedicine kiosk were much less expensive, $250,000 less in fact on average.
The objective was to create value by handling coughs and
colds via telemedicine to reduce ER expenses.
Trying to move Americans to get the right care through the
right channel is key.
Most important, the market potential of Telemedicine was a
high-growth area.
Right now, this technology is being piloted in a Rite Aid in
Ohio.
In five years out we see this moving into the home, via
smart television instead of a kiosk. As well, we'll see more remote monitoring
devices.
Home-based telemedicine is where the future is heading to
make our lives easier.
Michael Graber is the
managing partner of the Southern Growth Studio, an innovation and strategic
growth firm based in Memphis, TN. Visit www.southerngrowthstudio.com to learn more.