Ambidexterity vs. Ecosystems: In Search for Sustainable Model of Intrapreneurship 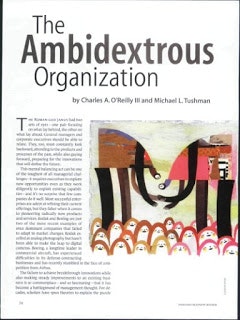 Innovation has climbed to the top of the corporate agenda in
many large organizations, but its practical impact on the corporate performance
has often been disappointing. Some would go as far as to
say that the corporate innovation is 'broken.'
This is perhaps an exaggeration. Large companies are
actually quite good in what is commonly known as incremental innovation, which
is a systematic improvement of already existing products or services; they're
also doing a decent job in streamlining operations and cutting costs. However,
it's definitely true that many corporations are much less successful in
creating new businesses--no matter how you'd call this type of innovation: breakthrough,
radical, transformational or disruptive. 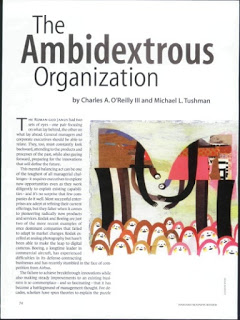 The reason is simple: a hallmark of any successful modern
corporation is a flawless, impeccable execution. However, while perfecting
execution and establishing the culture of predictability and control,
corporation lose the culture of entrepreneurship, the habit of experimenting
and taking risky bets. That's why transformational innovation, with its high
rates of uncertainty and failure, struggles to take root in the corporate soil.
Many experts and innovation practitioners see a solution to
this problem in bringing the spirit of entrepreneurship back in the corporate
fold; a special term, 'intrapreneurship,' coined
more than 30 years ago, is now actively used to describe this process. Being
intrapreneur means working for a large company, yet behaving as a small
company's entrepreneur, that is, cherishing risk-taking and
experimentation.
On October 8, in New York City, The Corporate Intrapreneur Summit
will take place, organized by the Institute
for International Research and Culturevate.
The Summit will bring together thought leaders in the field and practicing
intrapreneurs from more than a dozen of leading corporations. One topic that is
likely to come up in the discussions will be what models of intrapreneurship can
be used to get real results.
Back in 2004, Charles O'Reilly and Michael Tushman wrote an
influential paper for the Harvard Business Review titled 'The Ambidextrous
Organization.' O'Reilly and Tushman argued that corporations actually don't
have to choose between investing in existing (core) and new businesses; they
can do both (be 'ambidextrous') by creating corporate structures supporting both incremental and transformational
innovation. 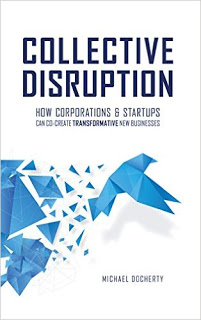 Critics of the ambidextrous organization concept pointed out
that the requirements for both types of innovation are so different, even
contradictory, that what makes companies great at optimizing the current
business makes them terrible at creating new business opportunities. For this
reason, ambidextrous organizations can't be but a rare exception (3M and Google
are traditionally mentioned as these rare exceptions).
An alternative to the ambidextrous organization approach has
also emerged. In his recent book 'Collective
Disruption,' Michael Docherty, the CEO of a consulting company Venture2
(and a past successful intrapreneur himself), suggests that corporations should
support transformational innovation by creating innovation ecosystems including
startups. In this innovation symbiosis of sorts, startups will provide large
companies with disruptive ideas along with a playground for testing and early
prototyping, whereas large organizations will use their resources to scale up
the most viable ideas.
Many would argue that differences between the two models of
intrapreneurship are more semantic than real. Both require more openness to the
external sources of innovation; both require more flexibility in relationships
with outside partners; yet both require the creation of some corporate
structures to facilitate the process. It's therefore very likely that a new, 'hybrid,'
model may emerge combining the best features of the two original concepts.
Hopefully, the upcoming Summit in NYC will make a significant
contribution to creating of such a viable model of corporate intrapreneurship.
About the Author: Eugene Ivanov is helping organizations of different sizes design
and implement internal and external innovation programs. He's an expert in
selecting and defining R&D problems that can be successfully solved by
crowdsourcing. He writes blog Innovation Observer and tweets @eugeneivanov101.