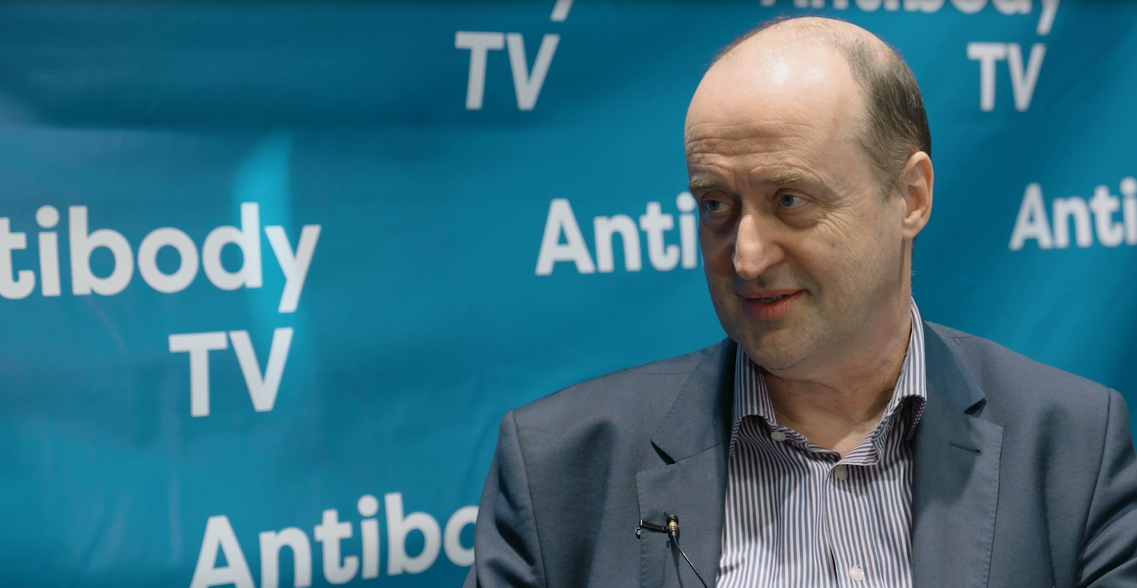 Founder and CEO of IONTAS Dr John McCafferty joined us at Antibody Engineering and Therapeutics fresh from attending the Nobel Prize Award Ceremony. We spoke to him about how his pivotal work on the development of antibody phage display technology helped contribute to the Nobel Prize in Chemistry awarded last year.

Back in 1988, George Smith published a paper demonstrating peptide phage display. Dr McCafferty explains that 'in essence he was able to show that you could take the gene encoding a short peptide, clone it into the filamentous bacteriophage of E. coli and do that in such a way that the peptide was presented on the outside of the virus and the gene encoding the peptide was on the inside.'

'We wondered if we could do the same thing but do it by presenting antibodies on the surface of a phage. It wasn't obvious at the time that it was going to work...but I was able to demonstrate not only that we could display a functional antibody on the surface of the phage, but also that we could enrich that phage particle against a background of others based on the binding of the antibody that was presented. So in effect we were able to use the binding properties of the antibody on the outside to isolate the gene which encoded it on the inside; that's really what the core power of phage display is all about.'

RELATED ARTICLE: What is an antibody?

This research was published in Nature in 1990, and jumping forward to 2018, this paper was cited by the Nobel committee when awarding Sir Gregory Winter and George Smith the chemistry prize for their work on phage display of peptides and proteins.

A revolution in antibody discovery

In 1990 when Dr McCafferty and his team started their work, antibodies were being generated by immunizing mice. However, researchers quickly realized that when injecting mouse antibodies into a human then humans generate their own antibodies against the drug antibody which will be recognized as foreign.

Dr McCafferty describes how phage display was able to 'unleash the possibility of actually isolating human antibodies directly. So we were able to make really large libraries - the current library we work with IONTAS is around 40 billion members - and the technology makes it very easy to actually fish in that library for antibodies to any desired specificity.'

Now used widely by big pharma and biotech companies, there have been 11 approved human antibodies from phage display, with a 'further 20 or 30' in the clinic.

The future of phage display technology

Looking at the potential of phage display going forwards, Dr McCafferty thinks 'we've only scratched the surface of the possibilities'. He's sure that in the coming years there will be many more human antibodies derived from phage display.

However, there are also other exciting paths developing as the industry continues to learn:

'In the very early days we were terribly excited about the ability to make antibody molecules and indeed we still are excited, but people have realized in the last decade or so that there's more to it than just generating a binder. You need to be able to produce high concentrations for subcutaneous injection and it needs to be a stable product. The community is waking up to the so called developability aspect.'

Dr McCafferty's own company IONTAS has developed a mammalian display platform that offers very early insight in developability problems 'so we can identify molecules that are likely to aggregate when we start working with them in higher concentrations or which are likely to cross-react with things that they shouldn't cross-react with'.