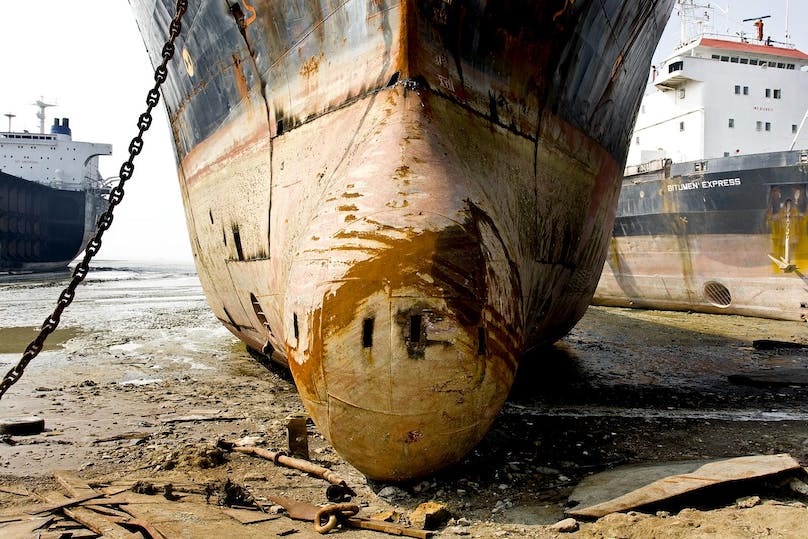 Beached vessels are driven onto tidal flats, where they are typically stripped by crews of low paid workers operating in dangerous conditions.

As many of these vessels are dismantled in situ, the practice presents significant environmental risks. Beaching can result in the release of heavy metals, solvents, engine oils and other pollutants with adverse impacts on human health and marine biodiversity.

It is the predominant method of dismantling end-of-service vessels used in the Indian subcontinent, where the majority of ship recycling takes place. In 2018, 518 of the 744 vessels scrapped globally were dismantled in India, Pakistan and Bangladesh.

As media scrutiny of the hazardous working conditions endured by ship breakers in the subcontinent has increased, calls to ban the practice of beaching have gained momentum.

But Henning Gramann told GST Europe attendees that this course of action would have unintended consequences. “The reality is that the majority of ship recycling capacity is beaching - more than 70%,” he said.

Gramann‘s remarks follow the introduction on December 31st 2018 of the EU Ship Recycling Regulation, which requires that all large sea-going vessels sailing under an EU Member State flag are recycled at one of an approved list of facilities.

There are at present 26 facilities on the approved list, only three of which are outside the European Union.

Shipbreaking yards on the subcontinent that have applied for inclusion on the list face criticism due to their use of the beaching method. Often yards with much lower safety standards avoid criticism entirely because they have not applied for approval.

There is a “huge difference between the good and the bad Indian yards,” Gramann told the conference. Although good yards still use the beaching method, components are lifted directly to a separate area for cleaning and dismantling, which reduces the risk to workers and prevents the release of hazardous materials into the intertidal zone.

The emphasis should not be placed on banning beaching, but on “bringing up any yard, no matter what the method, to an acceptable standard,” Gramann said.

Taking this approach would hopefully minimise loss of income to workers reliant on ship breaking for their employment.

Ship breaking in the subcontinent also has the advantage of feeding into a growing, resource hungry economy. Scrap metal harvested from end-of-service vessels in India is far more likely to be directly reused than in Europe, where there is less demand.

Barring yards in the subcontinent from the approved list is a problem because the European Union is unlikely to have the capacity needed to fulfill its pledges under the new regulation, Gramann believes.

“There are a lot of games around with the numbers,” he warned. The new regulation may “leave the EU flagged ships in a great dilemma when they are at need of recycling.”

35% of the global fleet is owned by European ship owners, according to the European Commission, although many vessels are registered under foreign “flags of convenience” to take advantage of more lenient national laws.