Boldly going where no one has developed a business before 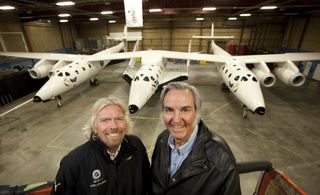 "If the development of air travel was the responsibility of NASA, we'd still be traveling from city to city staring at the [back] end of an oxen." This was a quote from Burt Rutan, whom I met at the Front End of Innovation Conference a couple of years ago.

While it's all too common to complain about the government, Rutan is a guy who does something about it. You'll recall that he was part of the team that won the Ansari X prize, a $10 million award going to the first privately-funded craft that could go into space twice in the course of a week.

Nice to win the prize, but he and Richard Branson (of Virgin companies fame) are developing their technology (see SpaceShipTwo in photo above) into a business, where for the introductory price of $200,000, you can get training and then go into space.

The key is that it's not just a re-hash of existing space technology, which is around 40 - 50 years old. This is a complete reimagining of how to do escape the atmosphere that is simpler, cheaper, safer, and more environmentally friendly. At least that's what Richard Branson says. As you watch the video, think about these questions: