Capitalizing On A Culturally Shared Experience 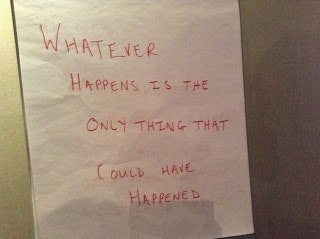 I can't in an informed manner speak to other parts of the world, but here in the United States, television as a cultural force is no longer the unifying medium it once was decades ago. Gone are the days of Ed Sullivan, Walter Cronkite. Johnny Carson, M*A*S*H, The Cosby Show, and everything else that once permeated from the television airwaves only. Today's television landscape is unbelievably fragmented. And even with cultural television standouts like Glee, CSI, and American Idol, the internet, DVR, mobile devices, and other technological viewing options make it almost impossible for us to share cultural television experiences in a mass and unified way. Today's equivalent of 'Who shot J.R.'? isn't likely to be coming anytime soon.

Aside from an unforeseen national tragedy, I can think of no individual regularly scheduled event other than the Super Bowl that brings droves of people together simultaneously. This year, according to A.C. Nielsen, about 111 million people tuned in to see the Packers outlast the Steelers in football's ultimate game. The game had a 71 share, which means more than two thirds of the televisions being watched at that time in the U.S. were tuned in to the Super Bowl on the Fox Network. (2011 viewership broke last year's record of 106 million.) Although both literally and figuratively foreign to me, perhaps World Cup Soccer matches are the equivalent in other parts of the world.

TV ads, as most people have come to expect, are as much about the Super Bowl as the game itself. There is often much anticipation concerning the ads prior to Super Bowl Sunday, and certainly there is much commentary after the game. The ads themselves ' at least online ' get broken down by analysts and pundits just like the game itself. (I too have apparently been sucked into this world). There are winners and losers in this ad game, just like the football game itself.

A big winner this year it seems is Volkswagen, particularly because of its Star Wars oriented ad for the 2012 Passat. I actually saw the ad before the big game because it had been 'leaked' onto the internet.

Chances are you've already seen it. If not, take a peek now.

There are two things about the Passat ad that are particularly interesting to me. These things are if not actually innovative, at least pretty clever (and in one case likely saved Volkswagen a bunch of money).

The Star Wars Passat ad showed up online a few days before Super Bowl Sunday. It relatively quickly flowed through various social media outlets ' Facebook in particular. It was boosted I believe by the perception that the ad had been 'leaked'. I thought this was particularly clever even though the ad wasn't really 'leaked', but rather simply 'released' by Volkswagen execs. People enjoyed I believe the idea that they were seeing something before it was intended to be seen. How many people do you think would have checked out the ad if Volkswagen simply announced it was 'releasing' the ad before the Super Bowl? It was certainly a great ad worthy of viral action. I'd contend though that not as many would have watched prior to the game if it hadn't been 'leaked.'

I watched the ad several times on YouTube in the days leading up to the game. It reminded me of my youngest son. When I finally saw the ad run on television, I noticed right away that it had been truncated. It was about 30 seconds shorter than the online version. See for yourself what aired:

As a stand-alone ad, the on-air version I don't think was quite as effective. It lacked some of the overall storytelling set-up of the original. (I suppose such things are bound to happen when you cut an ad from 60 seconds down to 30). I don't think it really mattered though because the on-air version was simply reinforcing the emotive and brand response already created for tens of millions of people on the web prior to the game. Everyone that saw the ad on YouTube or elsewhere already 'got it'. And everyone that didn't see the ad online were told about it by others and very well could have been brought to a computer at some point by a friend to watch the 'full-length' version once the Super Bowl ad aired on TV.

At anywhere from $2.8 to $3 million for a 30 second television spot during the Super Bowl, Volkswagen saved a chunk of change by not running the 60 second version. It got the effect it wanted at half the price. Being innovative can apparently save you money.