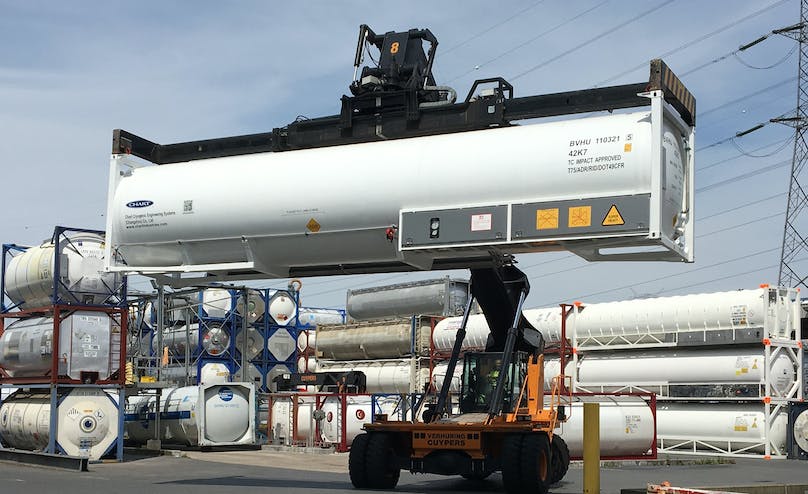 Liquefying natural gas to minus 160 degrees, transporting it safely over long distances, and regasifying it for use as a fuel is a capital-intensive proposition.

The costs of handling LNG are represented at every stage of the supply chain. Per unit of energy produced, LNG export facilities are among the most expensive energy projects on earth. LNG carriers are twice as costly as oil tankers on a per tonne basis, and typically transport only a quarter of the energy content.

The same problem extends to LNG import terminals. The International Gas Union estimates that for newly constructed facilities, capital expenditure on regasification plants, jetties, storage tanks and other receiving infrastructure added an average of $274 to every tonne of LNG imported in 2017.

Although global LNG consumption is rising more quickly than consumption of other fossil fuels, infrastructure costs have been the LNG industry’s most serious impediment to growth. For markets without the surety of large-scale, sustained demand, the risks of LNG infrastructure investment generally preclude further development.

Much of the technical innovation in liquefied natural gas over the past decade has focused on solving the chicken and egg problem of demand creation – the challenge of lowering up-front costs for markets with little existing gas consumption.

The growth in the Floating Regasification and Storage Units (FSRU) segment, able to act as flexible LNG import facilities in the absence of permanent regasification infrastructure, has been a notable product of this innovation.

But even FSRUs are limited in scope to regions able to purchase in bulk volumes of 100,000 million tonnes per annum or higher. Below that level, the commercial arithmetic of LNG carrier deliveries starts to unravel.

What remains is a significant proportion of the overall consumption potential, dispersed in small, discrete pockets. Reaching these markets requires a still more flexible approach than an FSRU can deliver.

Following a pathway already trodden by the LPG trade, some enterprising logistics players are turning to small-scale solutions to bring LNG to market.

The advantages that this flexibility brings have made small-scale LNG distribution a highly competitive alternative, even for buyers with access to conventional supply sources.

“Details matter, but in some locations where you have bulk LNG deliveries, and even some where you have pipeline deliveries, we can quite often still compete on price,” says Edgar Kuipers, Investment Director at Broadview Energy Solutions.

“A lot of the cost of bulk LNG shipments is CAPEX, where you need to have a return on investment,” he says. “If you look at the amount of CAPEX per cubic metre of transport capacity, containers are cheaper.”

Although some of Broadview’s customers are based in remote locations, the majority of their business is in Europe, where their LNG containers are used for anything from meeting surplus demand to providing a temporary, portable storage option.

Broadview’s business model is far from revolutionary, but it is fairly new to the LNG trade. Breaking down larger volumes for regional distribution is a far cry from the rigid, point-to-point LNG supply chain of past years.

Because small-scale distribution companies have no input into the upstream costs of the LNG they purchase, their competitive edge depends entirely on the margins from distribution. Finding the most efficient route to the customer is critical.

For distances of 500 km or less, transporting LNG by truck or rail is typically the cheaper option (and by rail only in situations where the distributor and the customer both have easy access to rail connections).

Above 500 km is where container shipping comes into play. Over these distances, margins are even more sensitive. Broadview’s approach is to be as selective as possible with the markets they explore.

“We are not lacking locations where there is a value proposition in the current climate for doing this,” Kuipers says. “[But] we are very selective with the leads we take up.”

“Good locations are locations where you have a direct route for the containership,” he continues. “Where we don’t have to change lines - we can go directly to that location and offload there.”

Another promising application for container vessel transportation is in locations with large seasonal swings in demand. Probably the most well publicised example of this came in November last year, when 130 LNG containers were shipped from China’s Hainan LNG terminal to the north of the country, where winter heating demand often outpaces supply.

Again, it is the flexibility of the small-scale approach that makes it competitive. “Container ships are fungible pieces of equipment – you don’t have to invest specifically for LNG,” Kuipers says. “So if it’s just for this regional shift for part of the year, containers could be cheaper.”

But even where small-scale LNG makes economic sense, it can take time for new methods to take hold.

In many of the markets in which small-scale LNG is gaining ground – including small island communities in the Bahamas, and parts of West Africa – LNG finds itself competing most directly with LPG and other oil derivatives.

“In most locations where we get requests, we think that LNG is competitive with oil derivatives – certainly in the current climate,” Kuipers says.

“But it is one thing to say you’re competitive, and another to really develop a market there. LNG is new and people are not familiar with it.”

For these markets, the logistics are only half the battle. First, fundamental technical and safety issues need to be taken care of.

“It’s nitty gritty things,” says Roland Hoyng, operations director at Broadview Energy Solutions. For instance, ensuring that the customer has the right connections to unload LNG from a container (obtaining one can take as long as six weeks).

“That’s the challenge we have – to help our customers to get LNG for the first time with all the safety questions and all the logistics questions answered,” Hoyng says.

For small-scale LNG to make headway in new markets, robust economics need to be complemented by a willingness to work with new buyers to overcome potential obstacles.

The ability of small-scale distribution companies to do this successfully will be key to the field's long-term development.

Edgar Kuipers will be speaking about the economics of small-scale LNG distribution at the upcoming LNG Global Congress in London. Join him there >>