How do doctors' conversations differ from private to public social networks 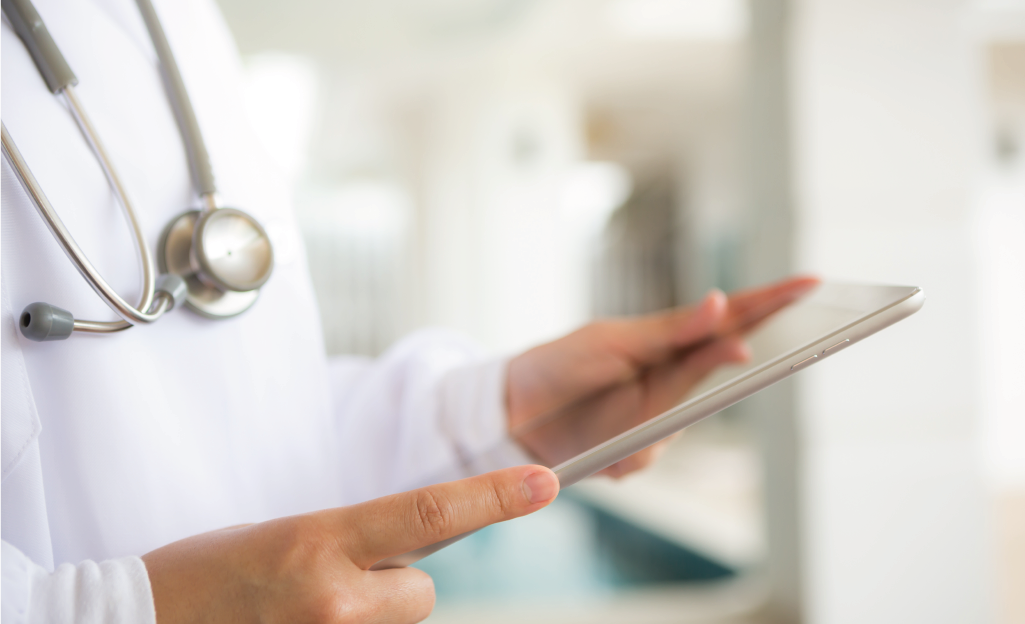 Recently I was at SMi’s 10th Annual Social Media in the Pharmaceutical Industry conference, co-presenting with Akash Degan, Vice President of Business Development at SERMO, on ‘How doctors' conversations differ from private to public social networks?’.

There are two ways of defining the difference between public and private networks. The first is relating to access to data; if data such as profile data and posts can be viewed by any internet user, this could be considered a public network. If the data cannot be viewed or identified by the general public, then it would be a private network. Another way of defining the difference is to look at how one can join a network. From this perspective a platform that anyone can create a profile to join would be a public network, whereas a private network would allow only a certain profession to join. SERMO, for example, requires an individual to prove they are a doctor before creating a profile. Some platforms such as LinkedIn and Facebook have elements of both public and private social media.

SERMO has four main activities a doctor can take part in: conversations, surveys, solving patient cases, and rating drugs. To compare these activities to other platforms one could say the doctors ‘Talk’ as on Facebook, they ‘Earn’ via surveys as on Survey Monkey, they ‘Solve patient cases’ as on Quora and they ‘Rate drugs’ as on Yelp. 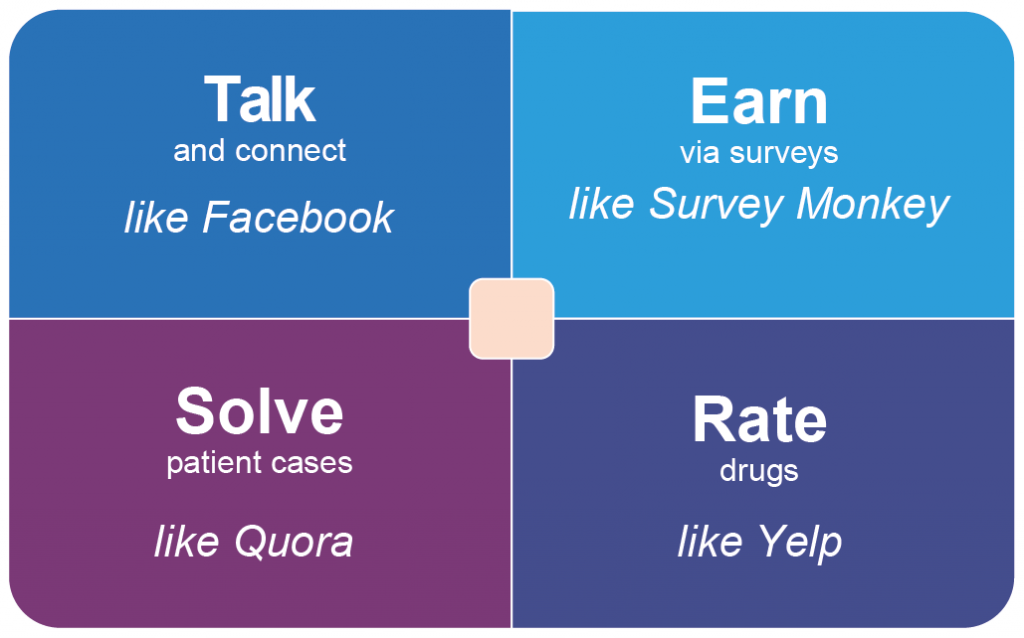 At CREATION, we conducted a study to compare the conversation and drugs rating data emerging from SERMO, representing a private social network and Twitter, representing a public social network. We focused the study on data relating to anti-coagulation, specifically looking at the views of healthcare professionals in the United States on novel oral anticoagulants (NOACs), between 1st January 2017 and 31st December 2017.

At a high level, we observe that the volume of conversation per month on both Twitter and SERMO differed greatly from product to product. Overall conversation and the individual drugs conversation peaked at different times across the year. The triggers and initiators for conversation on the different networks are not the same.

Looking at the overall conversation throughout 2017 on Twitter, we see a number of trends. Some of the high points in the public conversation were trial results such as results from the RE-VERSE trial looking at Praxbind, the reversal agent for Pradaxa, creating a stir in July. The results of the COMPASS trial were released at ECC2017 in August and also drive a spike in conversation. It is notable that most Tweets (85%) contain a link: further analysis of this data could reveal more relating to the digital behaviours and trends of HCPs. Due to the nature of SERMO posts being more conversational, in a forum style, there is less sharing of links or sources (5% of SERMO conversation posts contained links). The highest peak in the public network conversation in this study was during ACC2017 in March. Peer discussions during congress occurs more on public social media than on private networks. 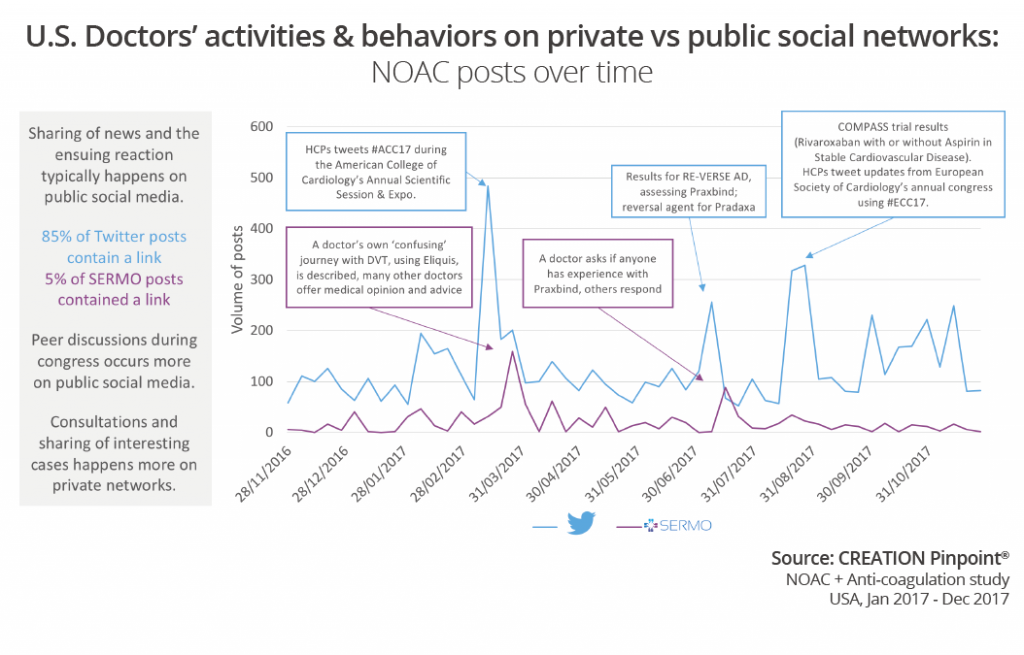 SERMO conversation often revolves around an online consultation or story sharing. Therefore, when a thread becomes particularly interesting to many doctors it creates a spike in volume. In 2017, a doctor told his story of having DVT and using Eliquis and many others joined in to discuss. Later in the year, there was one week where the SERMO conversation actually saw more volume of posts than the Twitter conversation. It was just after the trial results relating to Praxbind: after the volume of physician conversation in public had subsided, doctors were asking each other to share any experience of using Praxbind. This is an example where the public and private network conversation were around the same topic, with each network enabling different physician behaviors. 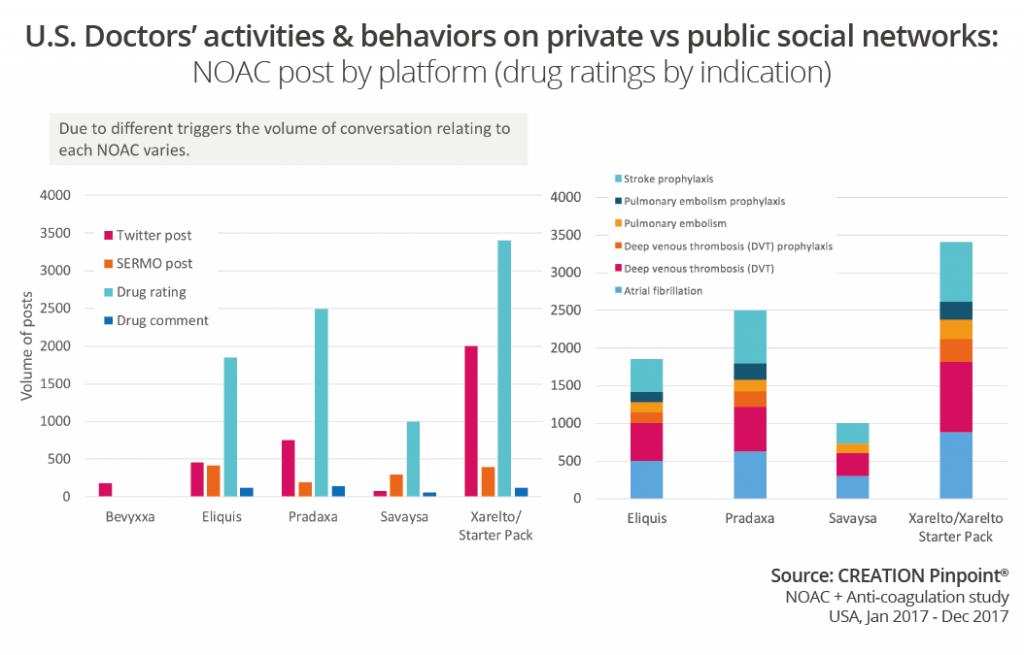 There are conversations in the public space about Bevyxxa, the newest NOAC to market; however there is no mention of the product yet in the SERMO conversation. We can observe a time gap between the launch of a drug and the discussion on SERMO in which doctors start to gain some experience with patients on the drug. Conversely, on public social media, HCPs will often start sharing opinions on news as it happens.

A fairly new and very exciting feature on SERMO is the drugs ratings. Although it has been available throughout 2017 doctors seemed to be rating drugs more frequently towards the end of the year. The number of drug ratings does not seem to be influenced by news stories or conversations with others on SERMO or Twitter.

When rating drugs on SERMO, the doctor rates it according to the indication. Therefore, to illustrate how granular we can get in comparing data we mapped out where the authors were located who rated or commented about a NOAC for deep vein thrombosis. 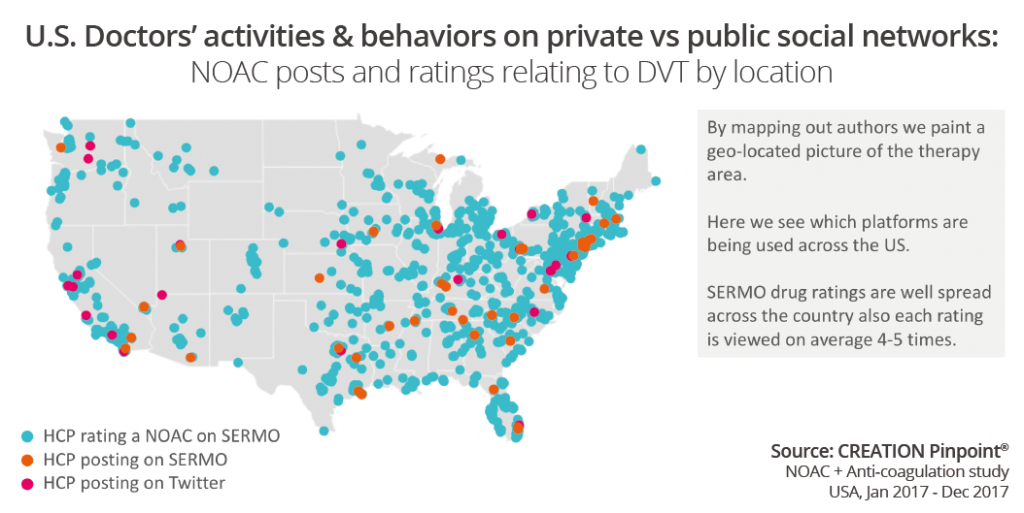 Here we see which networks HCPs used to comment (Twitter pink, SERMO conversations orange) over SERMO Drug Ratings (blue). This opens many possibilities to explore how this may look if we broke down by drug, or by topic, or sentiment: would the conversation be an even spread or would there be one area driving conversation? Regarding the location of HCPs in the conversation there are a lot of new exciting possibilities when we access data from different networks, including public and private network conversations. 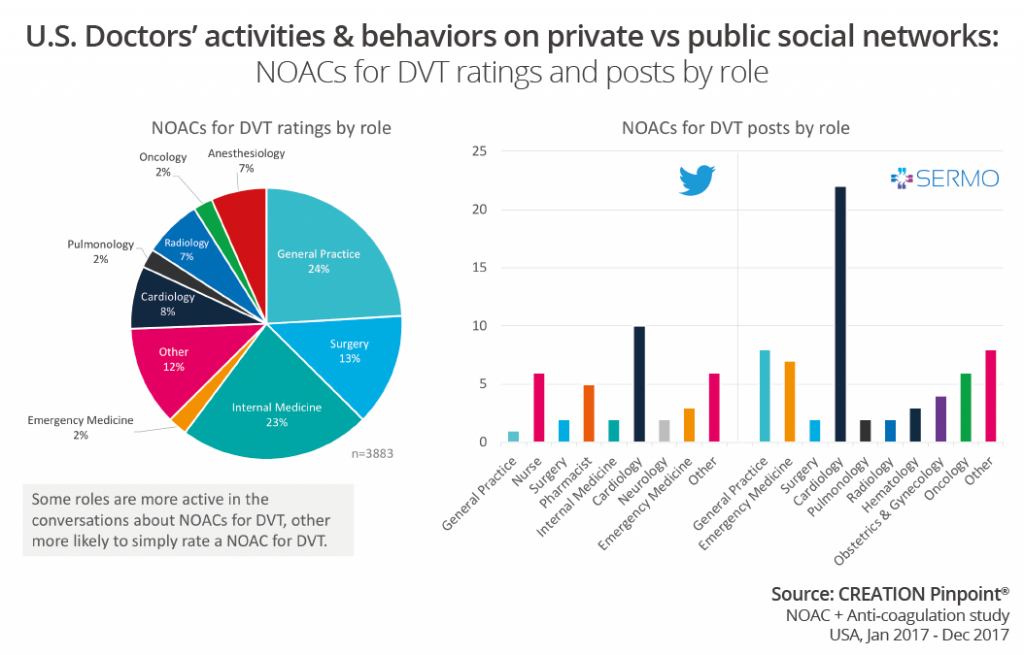 We can also compare and contrast which role type is taking part in the conversation across networks as well as who rates the drugs. On SERMO we are tracking doctors in many different specialities, whereas on public social media this scope extends to other healthcare professions such as nurse, pharmacists and allied health professionals. In this study we can see that cardiologists were the conversation drivers on both public and private social media, whereas when it came to rating the products, GPs and internal medicine doctors were most active. 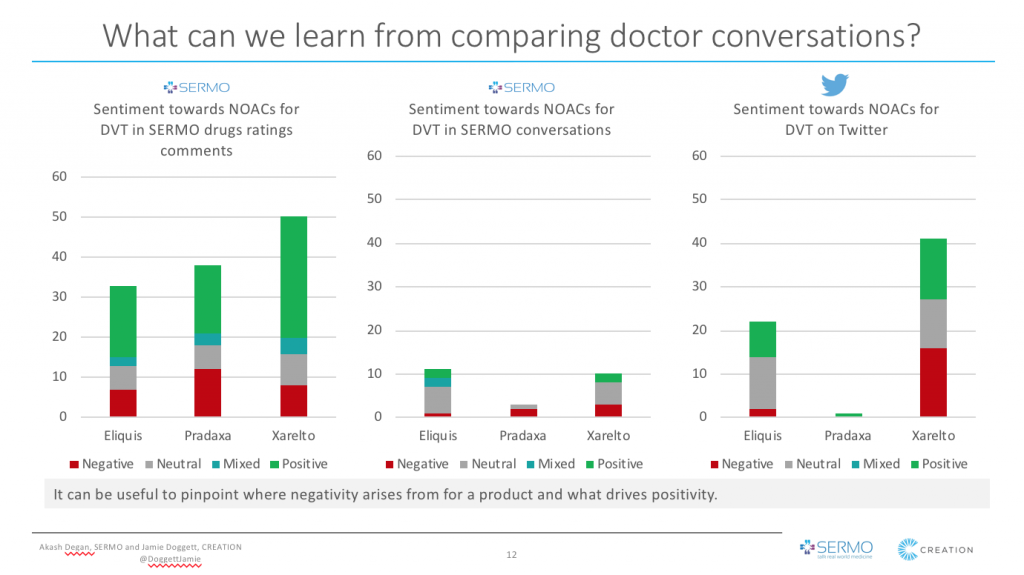 By breaking down the conversation about three of the drugs by sentiment we can gain an understanding of HCPs’ views towards certain products. Relating to the NOACs in 2017 we see there was a prevailing negative sentiment towards Xarelto based on some opinions about trials on public social media. But if we look at how doctors were talking about the same product in private on SERMO, we see an overwhelmingly positive conversation. This demonstrates the importance of looking at the conversation from all angles.

What can we learn from this study in particular? Firstly, to get the full picture of HCP opinion we must understand and look at all networks. Missed data from a platform could be key data to help understand the story. Secondly, although there are certainly trends to be seen on each network we should not put networks/channels in a preconceived box. There are many very honest and telling conversations on public social media as well as on private social media.

SERMO and the SERMO logo are registered trademarks of SERMO Inc., a US based business with operations around the world including Europe. Learn more about SERMO.