I recently attended an Easter egg decorating party, where a bunch of adults spent an entire afternoon coloring and bedazzling boiled eggs.  None of us have any kids; we did this for the sheer pleasure of creating interesting and attractive objects. 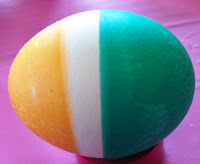 I was amazed at the creativity of the ideas that the group came up with in decorating the eggs.  (And in case you're wondering ' no, none of us are artists.)

This started me thinking about why it seems that we as adults don't exercise our inner child-like creativity more often.  And what was it about the Easter egg party that allowed us to so freely generate and express such range and diversity of ideas?  I think there were several factors, all of which also apply to innovation.

1. Each egg represented a very low commitment.  It was cheap in both time and materials to try any idea we thought of.  So we tried lots of ideas.  If one didn't work, it didn't matter ' it was just one egg.  Similarly, in your innovation work, you need to be considering and trying out many ideas, to ensure that you move forward only the best ones.  As innovation projects proceed through a company, they get more expensive in money, time, and labor at each successive phase.  Developing Fail Fast, Fail Cheap methodologies will allow you to try out lots of ideas early on, while it's still cheap.

2. We leveraged not only our individual creativity; we also used the power of the group.  Frequently, someone would come up with an idea they wanted to try.  We would toss our idea out to the group and everyone would contribute ideas for how best to accomplish it.  No one ever said 'Yes, but that won't work.'  We all just thought of ways to help make it better.  The resulting final solutions were nearly always significantly better than what the original person would have tried first. 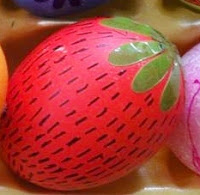 In many companies, the 'Yes, But' phenomenon is all too common, and can be very damaging to innovation.   Most ideas aren't perfect when they're first conceived.  But we act like they should be; we point out all the problems in a nascent idea before we ever attempt to find out if there's anything good about it.

For innovation and creative problem solving to thrive, it's critical to create an environment that nurtures ideas rather than stifles them, so you get the benefit of the best thinking of the entire team.

3. We were willing to completely revise an idea when something clearly wasn't working.  One woman brought the type of eggs that aren't naturally white; they were brown.  None of us were sure that dying them would work very well, if at all.  And the first few attempts really didn't work.  So, she entirely scraped off all the color on her unsuccessful eggs several times.  In the end, when she chose the right colors (reds, yellows, oranges) and left them in the dye bath long enough, she got some of the most uniquely rich and vividly colored eggs any of us had ever seen.
Unfortunately, in large organizations, too many innovation projects that aren't quite hitting the mark proceed too far without the modifications (or re-starts) they need.  You have to first recognize when an idea isn't working, and then be willing to revise or start again when you need to.
4. Reframing what we were trying to accomplish resulted in more divergent ideas. The woman with the brown eggs also tried other methods of decorating the eggs, not just coloring them with dye.  Once she reframed the problem from coloring eggs to decorating eggs, she got to the most innovative and unusual eggs of all.  This reframing of the problem is a critical step in effective problem-solving and innovation. 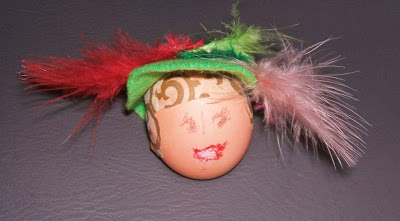 Editor's Note:
At FEI, Ideas To Go will host a breakfast where we'll briefly share information about Innovation Engineering', a management system that creates a culture of continuous innovation.  It increases speed and decreases risk by transforming innovation from a random event into a reliable, repeatable system for profitable growth.  If you'd like to receive an invitation to this breakfast to learn more about Innovation Engineering, email us.
About the Author 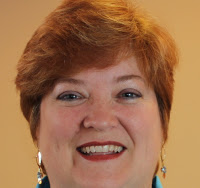 Susan Robertson is Principal and VP Business Development at Ideas To Go, an innovation consulting agency.  Her diverse business experience and enthusiasm for creative thinking inform her work -- facilitating customer-centered discovery & innovation for Fortune 500 companies, across a variety of categories and industries. She is also a frequent lecturer and trainer in creativity and innovation, having spoken at conferences and led workshops around the world, including South Africa, Italy, South Korea, Sweden, the U.K., China, France, Brazil, Mexico, and Greece.

She will co-present a session on Driving Innovation Through Better Customer Co-Creation at FEI 2013, taking place May 6-8, in Boston, Massachusetts.