The importance of risk culture has been emphasised in the recent past, but is strong risk culture effective in preventing misconduct? In this article, Elizabeth Sheedy, Professor, Macquarie University Business School, takes a deeper look at unethical pro-organisational behaviour – actions that can be justified as for the benefit of the company – and finds support for a new theory of conduct and culture.

Since the global financial crisis, financial institutions have worked to implement a strong ‘risk culture’. But despite poor risk outcomes, including legal costs, fines, and customer remediation, misconduct toward customers continues to occur. Does this mean that risk culture is the wrong way to approach misconduct? Or is it that attempts to create a risk culture have just not worked? New research from Macquarie Business School in Sydney sheds new light on this problem, identifying the kind of organisational culture that is most likely to reduce misconduct toward customers.

This new multi-disciplinary research is co-authored with organisational psychologists Patrick Garcia and Denise Jepsen, also from the Macquarie Business School. It is currently under review with an international journal. 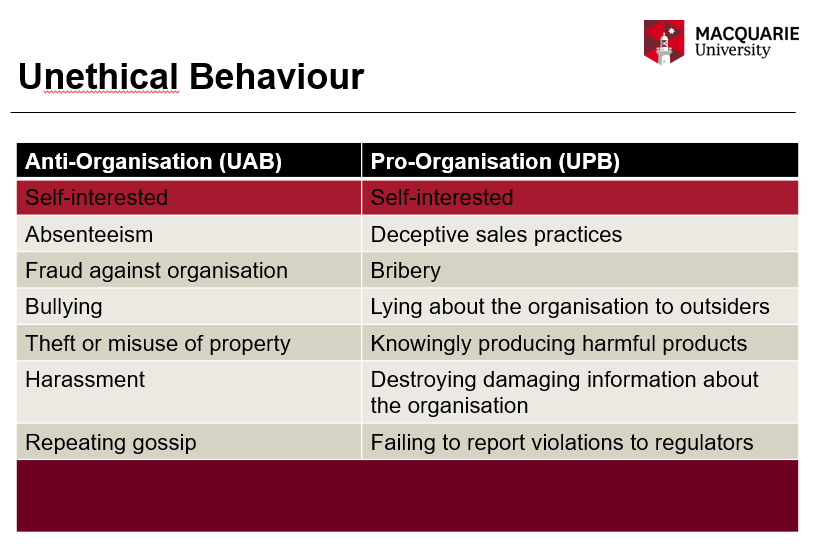 In the last 10 years, academic researchers have identified the concept of unethical pro-organisational behaviour or UPB. It’s helpful to divide unethical behaviour into two broad categories. On the left-hand side, we have behaviours like fraud and bullying – behaviours that are unambiguously ‘bad’ because they hurt the organisation. On the right-hand side of the table, the behaviours are much more complex. If staff lie to customers or regulators, this clearly contravenes societal notions of ethical conduct, but lying has a benefit to the organisation, at least in the short-term. Higher sales and avoiding fines will boost short-term profits, so staff might do this out of a false sense of loyalty to the firm. Mixed up in this is self-interest. High short-term profits could help you get a bonus or a promotion or just make everyone think you’re great. So UPB, or unethical pro-organisational behaviour, is a very interesting concept. You could say that a lot of the problematic misconduct in financial institutions falls into this category. We need to understand more about it and the culture that enables it.

In this study we asked participants to self-report UPB. An example item is “If it would help my organisation, I would misrepresent the truth to make my organisation look good”. Sometimes survey research is criticised because of concerns about biased reporting. These items for UPB actually work quite well from the viewpoint of social-desirability bias, because there’s a justification built into the item. People might feel more able to admit to lying for the benefit of the organisation. In addition, we controlled for Impression Management – the tendency for some people, consciously or not, to try to make others think well of them.

A theory of culture and conduct risk 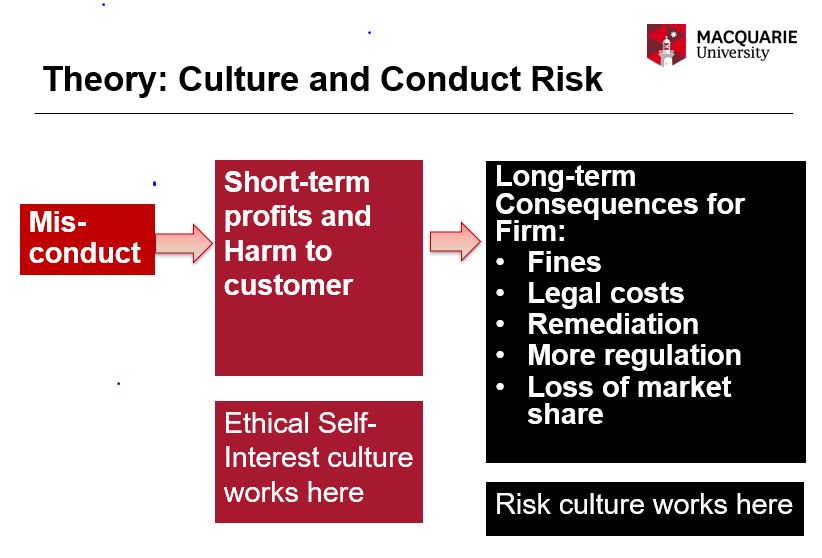 Using survey data collected from staff in three Australian financial institutions, the team examined both risk culture and ethical culture, to see their relative importance for addressing misconduct. Suppose that misconduct is occurring e.g. selling credit card insurance to unemployed people who are ineligible to claim. In the short-term this produces profits for the firm but customers are harmed. They pay premiums for a product they can’t use. In the long-term, the firm might experience consequences like fines, legal costs, more regulation etc. Risk culture, if it was effective, would attack the long-term consequences. People would be raising concerns, highlighting these long-term consequences, and business practices would be modified.

Ethical culture is likely to influence how the firm responds to the more short-term issue of customer harm. In a strong ethical culture, staff would be likely to raise issues about the adverse impact of the practices on customers themselves. Customer outcomes would be seen as an end in themselves, not just because of the long-term consequences to the firm.

The results of this study suggest that senior leaders, with appropriate encouragement from regulators, should revisit workplace culture initiatives. A multi-pronged approach is needed to grapple with the hitherto intractable issue of misconduct. The four key messages from this study are the need to promote concern for multiple stakeholders such as customers, rather than self-interest; ensure that risk issues and policy breaches are never tolerated, ignored or downplayed; inculcate proactive behavioural norms for identifying, reporting, analysing, discussing, escalating and resolving issues of concern; and ensure that managers throughout the organisation are effective role models and advocates both for the customer and for risk management. The findings have implications for performance measurement and reward mechanisms, for employee/ manager training programmes, for resourcing of the risk function, and for organisational communications including statements of organisational values.

This article was originally published in the RiskMinds eMagazine Resilience under pressure.