Schemes, policies, and digitalisation: How India is preparing for exponential growth 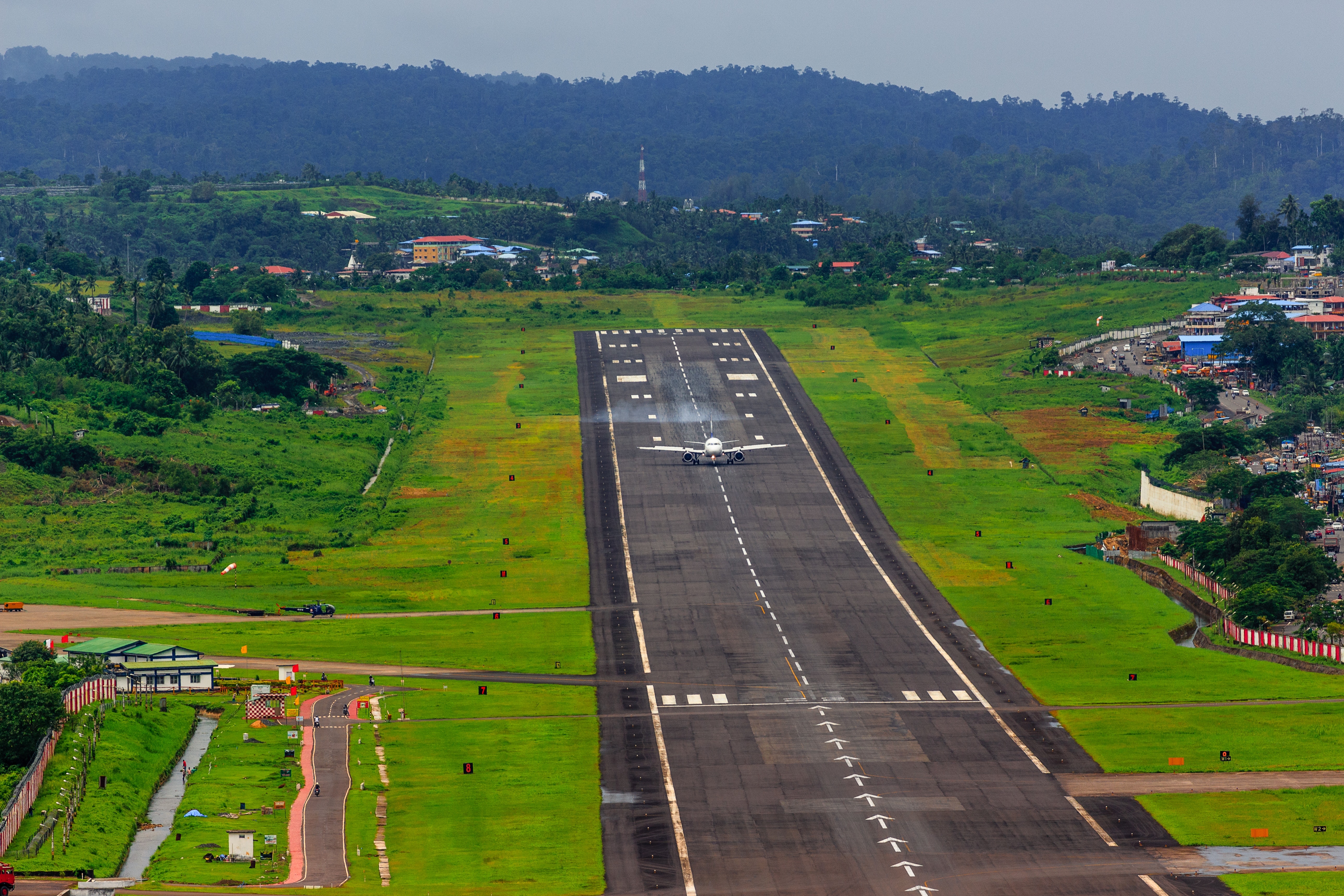 There are a large number of airports in India that are in need of investment in order to realise their full potential, especially in the next 20 years, during which India’s air traffic is expected to grow sixfold. In the last 20 years, only a handful of airports have been privatised, but recently the dialogue has been picked up again. To keep the conversation going (and the cash flowing), the Government of India is intent on supporting privatisation with schemes and policies to attract potential investors.

During the first phase of airport privatisation in 2004-2006, Delhi, Mumbai, Bangalore and Hyderabad Airports were privatised. After that the private players’ participation had slowed down. Foreign investors were still not attracted to make investments in the Indian airport sector, and the glaring example of it was their lack of interest in Mopa Airport, Goa and Navi Mumbai Airport (NMIA) bids, and earlier in the O&M contract model for Jaipur and Ahmedabad airports.

In Mopa and NMIA, financial bids were received from only two private parties. Only one international operator participated in the case of Mopa and none in the case of Navi Mumbai Airport.

Bids for operation and maintenance contracts of airport terminal buildings at Ahmedabad and Jaipur were postponed twice due to lack of interest – only two Indian and foreign company were considering these opportunities. Even after AAI made changes to the bid conditions, only one bidder submitted physical documents for both the airports.

The Government of India (GoI) then made the bidding criteria more attractive, and adopted the per-passenger fee model, which is a modification of the revenue-sharing model that was used earlier in the privatisation of airports such as Delhi, Mumbai, Bangalore, and Hyderabad.

Based on the new model, the GoI in November 2018 invited bids for operation, management, and development of six operational AAI airports viz. Ahmedabad, Jaipur, Lucknow, Guwahati, Thiruvananthapuram and Mangaluru under PPP for 50 years. The government received a total of 32 technical bids from a total of 10 companies. The bid for all the 6 AAI-run airports has been won by Adani Enterprises. The financial bids were opened on 25th and 26th February 2019. Adani Group put in a bid of per-passenger fee of Rs 177, Rs 174, Rs 171, Rs 168, Rs 115 and Rs 160 for airports at Ahmedabad, Jaipur, Lucknow, Thiruvananthapuram, Mangaluru and Guwahati, respectively. The per-passenger fee for domestic passengers was the sole criteria for selecting the winning bidder and the per-passenger fee will be paid to the AAI.

Also, in November 2018, the Andhra Pradesh Airports Development Corporation (APADCL) initiated the RFP process for new Greenfield airport at Bhogapuram, near Visakhapatnam in Andhra Pradesh. The project involved design, build, finance, construction, development, up-gradation, modernisation, operations, and maintenance of the Bhogapuram Airport for a period of 40 years. The bid for developing, operating and managing a Greenfield international Airport at Bhogapuram has been won by GMR Infrastructure Ltd on 25th February 2019. GMR offered a revenue share of Rs 303 per passenger with the government. The initial (phase 1) capacity of the airport will be 60 lakh per annum that will be built at a cost of Rs 2,300 crore.

On the same model, the bid for developing, operating, and managing a Brownfield international airport at Nagpur Airport, Maharashtra on a PPP model has been won by GMR Infrastructure Ltd.

There is a need for the specialised agency in the form of Development Financial Institution (DFI) for extending finance/ loan for infrastructure projects in order to revive the investment climate for the infrastructure sector. Efficient funding instruments will help to reduce the finance costs which would ultimately benefit the air passengers and air cargo users.

The National Civil Aviation Policy (NCAP) 2016 has set the vision to reach cargo volumes of 10 million MT by 2027. To achieve this vision, the cargo industry needs to grow at a rate of circa 12.9% every year from 2018 to 2027. The cargo capacity of all the airports in the country currently stands at 4.63 million tonnes.

The infrastructure bottlenecks and various other issues like inordinate dwell times, missing and non-traceable cargo, damaged cargo, lengthy cargo processing times and queues at the cargo terminals etc. can impede the sector's ability.

Presently, PPP airports have sufficient cargo capacity for handling cargo for a decade. However, in line with their individual airports master plan and with the cargo growth, PPP Airports will upgrade their cargo terminal capacity. For e.g. Delhi Airport has decided to upgrade, develop and construct facilities to expand cargo terminal capacity to 2.2 million tonnes per annum by 2034.

The NCAP envisages creating an ecosystem which encourages economic growth of the country, by enabling people to connect with ease at an affordable cost, through Regional Connectivity Scheme (RCS), titled as UDAN (Ude Desh ka Aam Nagrik).

The policy aims to encourage the development of airports by state governments, AAI, private sector through PPP mode.

With an aim to increase the number of airports to between 150 and 200 by 2035, from around 100 at present, the Ministry of Civil Aviation (MoCA) launched a Regional Connectivity Scheme (RCS) – Ude Desh ka AamNagrik (UDAN) on 21 October 2016. The scheme envisages providing connectivity to un-served and under-served regions of the country through revival of existing air-strips and airports. The primary objective of the scheme is to facilitate and stimulate regional air connectivity by making it affordable. This would be achieved through a financial stimulus in the form of Central and State government concessions, as well as Viability Gap Funding (VGF) to the interested airlines to kick-off operations from such airports, so that the passenger fares are kept affordable. UDAN is a 10-year scheme.

Since then, three rounds of biddings have been completed. The first RCS-UDAN flight was launched on 27th April, 2017 at Shimla. 106 RCS Airports/ Water aerodromes (76 unserved, 20 underserved, & 10 waterdromes) and 31 heliports have been identified for commencement of RCS flight connecting small cities in India. 706 RCS routes, including 46 Tourism RCS routes, have been awarded to 19 selected airline operators under UDAN. RCS flights commenced from 40 RCS (23 unserved & 17 underserved) airports. Durgapur Airport is the 40th airport to become functional under the scheme. The total operational routes under UDAN are 194 (including 8 Tourism RCS routes and 2 DoNER Routes).

In alignment with enhancing demand and extending reach of air travel, government is also focusing on developing capacity. Through, NABH Nirman, the government plans to expand airport capacity in India more than 5 times to handle a billion trips a year in the next 10 to 15 years. This will entail investment of Rs 5-6 lakh crore over 15 years. Scheme constitutes both private and public-sector investments in airports.

As part of NABH, the plan is to establish about 100 airports in 15 years with an estimated expenditure of $59 billion. The initiative is expected to further enhance connectivity to smaller towns and cities which will increase tourism and employment.

The Ministry of Civil Aviation under the proposed Digi Yatra initiative is looking forward to making boarding pass and security check-ins digital at airports using Aadhaar and mobile phones. Under this initiative, entry to security hold and boarding would be done through e-gates activated by face recognition. Passengers will receive all services through face recognition. As the personal data of a passenger is used under the scheme, the enrolling for the Digi Yatra scheme would be "voluntary in nature and non-intrusive".

Biometric boarding has been introduced at a few airports, including Hyderabad and Bangalore on a trial basis.

Recently, the GoI launched the upgraded version of AirSewa 2.0 web portal and mobile app (on 20th November 2018). The upgraded version of AirSewa provides a superior user experience with enhanced functionalities. Major improvements include features such as secure sign-up and log-in with social media, chatbot for travellers support, improved grievance management including social media grievances, real-time flight status, and details flight schedule. The upgrade and improved version of AirSewa operates through an interactive web portal as well as through a mobile app for both android and iOS platforms and will offer passengers a convenient and hassle-free air travel experience. The web portal and application will help to capture air travellers’ feedback for policy interventions. Further upgrades of AirSewa are also being planned which would include Digi Yatra registration, airport maps, BHIM payment integration and grievance escalation and transfer.