Survival of the FIDest: LNG projects at risk if price rut continues 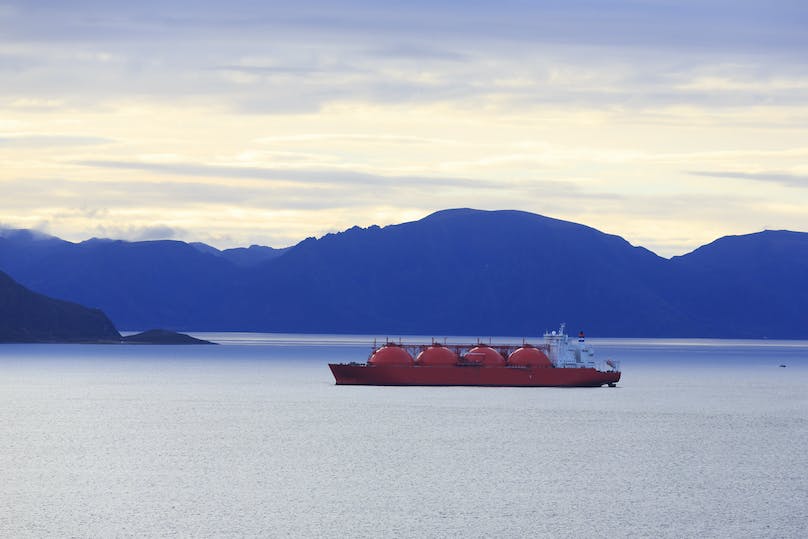 The current slump in LNG prices could lead to project FID delays in 2019. Rystad Energy has analyzed a dozen liquefaction plants scheduled for a final investment decision (FID) by 2020, and found that if LNG prices remain at the current low level for an extended period of time, some of the more expensive projects could struggle to offer competitive terms to buyers and this could result in FID deferrals.

However, with prices forecast to increase in the medium term, projects in Qatar, Russia, and Mozambique could remain more economically feasible and likely to reach FID soon.

Rystad Energy studied 10 projects (shown in Figure 1) and how their project economics hold up against a lower LNG price in Asia, where more than 75% of global LNG volumes are currently consumed.

This would make projects such as QatarGas LNG T8-11, Russia’s Arctic LNG 2 and Mozambique’s Area 1 LNG and Area 4 LNG more competitive, as they all have breakeven prices of less than $6 per MMBtu, due to cheap feed gas and low LNG plant capex.

Thus, these projects could jump ahead of the line and reach FID in 2019 or 2020. US projects are also sitting pretty at expected breakeven prices of around $8 per MMBtu, with feed gas priced at Henry Hub of $3.08 per MMBtu and an LNG plant capex average of $3 per MMBtu.

However, as the trading tensions between the US and China are becoming more strained, US project economics might be affected in the long-term, due to lack of long-term contract support from China, the world's largest gas buyer.

The PNG LNG project in Papua New Guinea and Pluto LNG T2 in Australia are projects that will break even between $7 and $8 per MMBtu and could therefore be specifically favored by Chinese buyers to US volumes.

A Heads of Agreement was signed between Australia's Woodside and China's ENN in April to supply ENN with 1 million tonnes per annum (tpa) of LNG for a 10-year period from 2025, indicating market support for the Pluto LNG expansion project.

The PNG LNG project has the advantage of being sponsored by ExxonMobil, which has the financial ability to take the project forward through equity financing, making it less vulnerable to the current price environment. 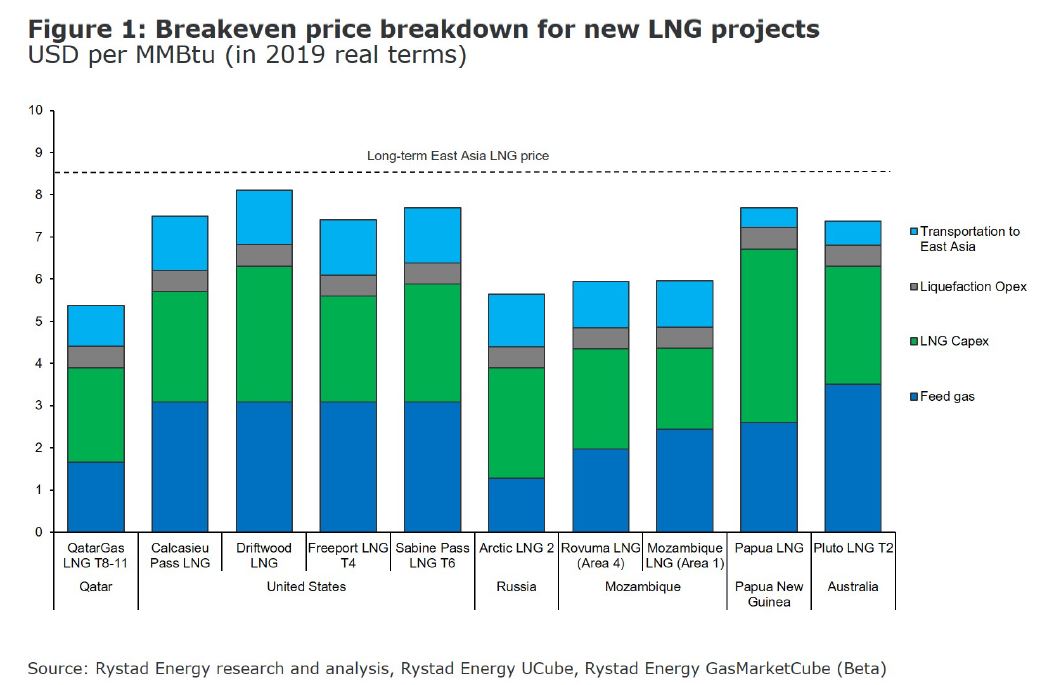 The beast in the Middle East

Rystad Energy expects that new liquefaction projects with a total capacity of more than 120 million tpa are likely to reach FIDs in the coming two years.

The giant among these projects is the QatarGas LNG North Field expansion, which plans to add 31.2 million tpa capacity with four new trains.

In Mozambique, the 12 million tpa Mozambique LNG (Area 1) project has locked in more than 90% of the delivery capacity into sales and purchase agreements. However, it will be crucial to follow who takes ownership of Anadarko’s 26.5% operating share in Mozambique LNG as this could be a major determinant in the project’s future. 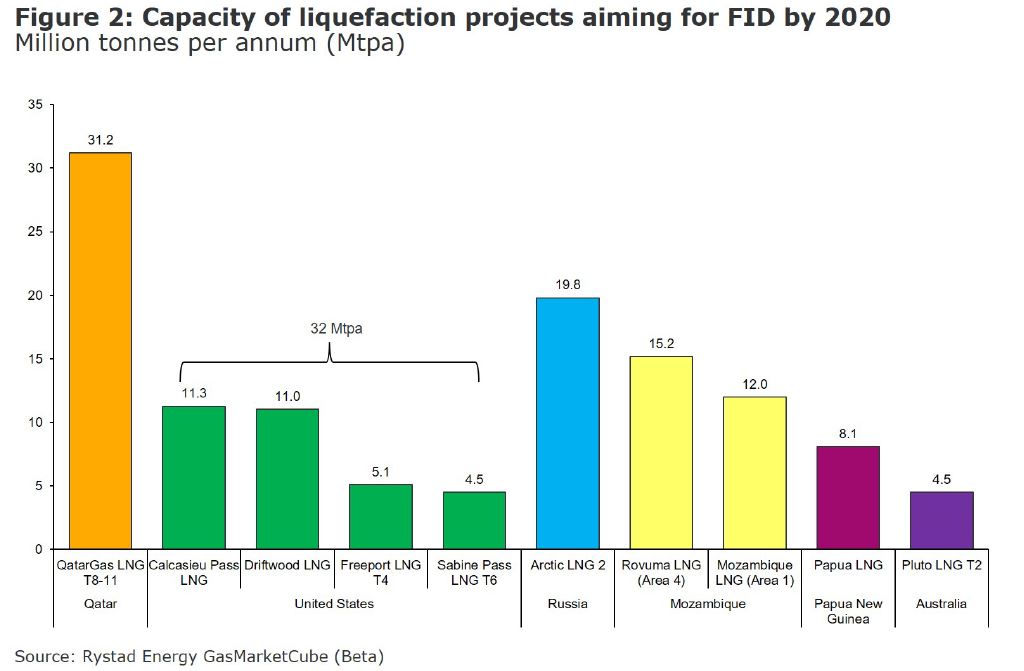 With the global LNG market poised to remain loose through 2020, LNG players are rightfully concerned that the current price environment could derail their plans.

Buyers currently have more bargaining power as spot prices are very low so if they don’t achieve favorable contract terms, they could in theory take the risk and buy volumes on the spot market.

Historically, Asian LNG buyers have been willing to pay higher premiums than European buyers, resulting in higher netbacks in Asia than in Europe.

However, given a lack of response from Asian buyers, we have observed that Qatari netbacks in Asia and Europe have started converging at around $5 per MMBtu in 2019 and US shipments were fetching even higher netbacks in Europe than in Asia since fall 2018.

Low prices have been squeezing netbacks for global LNG volumes heading for both continents since September 2018. Netbacks in Asia for Qatari and US LNG volumes have dropped 63% and 65% from September last year to this April, respectively.

Similarly, netbacks in Europe for Qatar and US shipments have declined by around 60% during the same time period.

As northern hemisphere summer approaches on the spot market, Rystad Energy anticipates Asian demand to rebound and netbacks to increase in the coming months, which could potentially reopen the arbitrage between Europe and Asia. 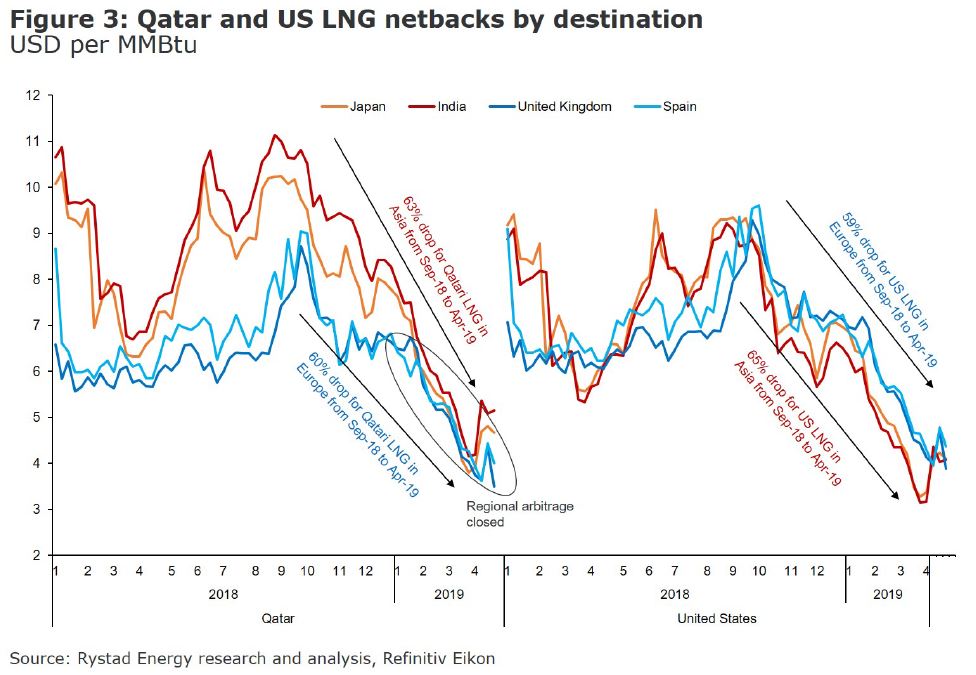 Bigger could be better

The current price conditions will probably not halt the development of liquefaction capacity, as there is general acceptance in the market that prices will eventually rebound as the balance tightens.

But this offers a unique opportunity for buyers to negotiate better terms if they decide to continue sourcing their volumes through long-term contracts.

The low prices could also drive an increase in liquidity in the spot market as some buyers could opt to take a risk and source LNG on the spot market rather than through long-term contracts.

This will give an advantage to liquefaction projects that do not require long-term contracts to secure their financing (i.e. those being developed by large E&P companies), as they will be able to go ahead with their development plans. Projects being developed by smaller players may face delays to their investment decisions as they wait for better market conditions to attract the necessary off-takers.

Editor's Note: This article has been updated to reflect up-to-date data on the breakeven costs of the PNG and Pluto LNG projects.

Xi is a senior analyst on Rystad Energy’s Markets team, where she’s focusing on the gas and power markets as well as product development. Xi, a Chinese citizen, has a Master of Science’s degree in Finance from BI Norwegian Business School. She was previously a senior analyst and content manager at Thomson Reuters, and an analyst at Econ Pöyry Management Consulting.

Find out more about Rystad Energy.